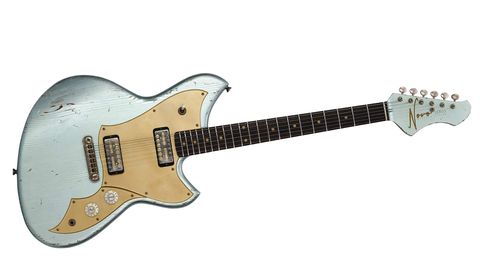 A beautiful time-travel piece on every level.

If there’s a maker than embodies the modern ‘boutique’ builder, it’s Dennis Fano.

Under his own name his retro-inspired designs, not least the Alt De Facto range, combined some very intelligent re-workings of the classics, added extremely authentic-looking ageing and soon became the default brand for many too-cool-for-school alt rockers.

Dennis had learned his craft at Matt Umanov Guitars on Bleecker Street. “It was literally five years of what would have been considered high education for me. Learning how to repair everything from ukuleles to banjos to acoustic guitars, electric guitars, basses, and on-and-on,” he’s quoted.

He’d started out playing bass and those were his original designs but in 2000 he left the legendary music store and branched out on his own. He remained pretty underground with enough orders to keep him going although he was about to go mainstream when, in 2009, he was approached by the now defunct Premier Builders Guild (PGB) and sold his company while he was retained in an active role as designer. He resigned from the PBG in 2015 and founded Novo in October of that year. A recent move, in May 2017, from Pennsylvania to Nashville, sees Novo building guitars in the centre of one of the world’s key music-making, and very guitar-friendly, communities.

“We are currently producing around 20 guitars per month, with a staff of six people,” says Novo’s general manager, Matthew Timmons. “We will be increasing that number steadily and plan to get to 60 per month before the end of 2018.

The people want more Novos!” From the experience of our offset review model, it’s easy to see why.

“Dennis loves the look of offsets but the main reason the majority of his designs are offset is because they balance well whether you’re standing or seated. The Novo silhouette is both familiar and new at the same time.” And, yes, the offset body is almost an amalgam of Fano’s earlier JM6 and RB6, yet seems slightly broadened and more enhanced around its lower bouts with those sharp pointed horns that are immediately distinctive.

It’s more than comfortable, seated or on a strap, not least with a weight of just over 7lbs - considerably lighter than any offset Jazzmasters or Jaguars that have come our way recently.

The main reason is the body wood, classed as tempered reclaimed pine, ‘tempered’ being yet another name for torrefied wood, heat treated to age and increasingly used by makers - both acoustic and electric. “These tempered woods have great resonance and they’re very stable. The only issue we’ve encountered with them is a lack of availability,” says Matthew adding that Novo is using 99 per cent tempered woods currently. “We love the stuff so much we really have no desire to use anything else.”

Four pieces seem to be used here. The overall body depth is 42mm, and the surface is ridged with the annual rings like small mountains and the softer annual growth wood as subtly dished valleys.

“Dennis has developed a sanding technique that coaxes the texture out of the wood. The wood’s presence and resonance are heard, seen, and felt at all times,” offers Matthew. The slightly blue-tinged silver looks stunning - now we know what happened to Mick Ronson’s Ziggy-era trousers! - and the distressing looks very accurate, like battle scars from heavy touring.

Historically, Dennis has distressed each instrument himself. “Unfortunately, yes,” laughs Matthew. “I say unfortunately because it’s one of the hardest things about increasing production from what started as a one-man operation. Dennis can’t do everything himself and the distressing is an art form unto itself. Finding the right person to apprentice under him was a challenge but we have found that individual and he is currently learning the ropes.”

And with so many makers currently ‘re-imagining’ the classics, the shape here is refreshingly bold and despite its vintage dress is rather original.

The slab sawn maple neck is again tempered which darkens the colour - the neck back here is a deep golden caramel-like brown with some flame on its sides adding to the visual interest. It feels extraordinarily good, burnished to a silky smooth surface, with an occasional ding and dent around the edges of the over-sized six-in-a-line headstock.

“The necks are finished in nitro, like the bodies,” Matthew confirms: “we then wear the finish off from the back and treat it with a proprietary blend of ‘dirt’ to give it a well worn look and feel.”

It’s all a deceptively simple build. The neck screws pass through a nicely aged - like all the hardware - Novo logo’d plate, while instead of the standard Mastery vibrato and bridge we have a Schroeder adjustable wrapover, quite fundamentally changing the guitar’s character. Fralin P-90s are standard but another change here - the Lollar Gold Foil soapbars - illustrates the differences than can be created from the same platform.

Typically, the scratchplate is two-piece - this J model having a Jazzmaster-ish larger top plate, the control plate is separate and apart from providing some visual interest means that maintaining the simple volume and tone controls is easy. Speaking of which, peering inside we see a pair of Emerson 500k pots and a 0.022microfarad paper-in-oil cap; there’s thick foil screening on the underside of the gold back sprayed acrylic ’plates - the small cavity has screening paint too.

We’ve mentioned the light weight but combine that with one of the nicest profile necks we can remember, not to mention a superb fret job including worn away fingerboard edges, and we have an instrument that not only ticks all the craft boxes but has that elusive feel of a guitar that’s already been considerably played in.

The ‘medium C’ is well named with a beautiful rounded handful in lower positions that fills out almost without you noticing in the upper positions, measuring a tapered 21.6mm at the first fret and 24.7mm by the 12th (excluding, as ever, the fret wire). The medium gauge frets (approximately 2.36mm wide with an average height of 1.2mm) suit the modern Fender radius of 241mm (9.5 inches) and string height, as supplied, checks in at 1.5mm on the treble side, 1.8mm on the bass with virtually zero relief and an effortless, yet precise, playing feel: old school and vintage-y as you’d expect yet very clean.

While the ‘J’ part of its name summons up a certain guitar, this hardtail/Gold Foil version, by design, moves into a different sonic space. It doesn’t have the steely highs from the bridge of our reference Tele, nor the gnarly bite of our LP Junior. It’s a little less visceral; a smoother single coil evidenced by the fact that the tone control stayed fully up during our test time.

The volume taper is a little abrupt but pull it back a smidgeon and the sound thins slightly, which not only cleans up the ‘hair’ but is a really good place to set your sound so the slight bump on the volume actually unleashes the full beast. These pickups love clean or grittier boosts and even more modern delays and modulation take on that slightly smoother voice. The dual pickup mix adds more texture while the neck recalls more of the Tele’s neck voice with a smooth yet not over thick voice.

It’s a melting pot of textures with some Fender-y, woody percussion without overdoing the metallic smack - like a well-behaved Telecaster without those sometimes over-bright highs, with perhaps, oddly, both gnarl and smoothness, and even a little dirt built in. Nicely grown up with a resonance and lived-in sound and feel, it’s a hard one to put down.

As a perfectly-crafted slice of original retro this Serus J deserves a good home. Yes, we’re certainly not all in the market for a £3k guitar but the price is comparable to that of a guitar from Fender’s considerably larger Custom Shop, so it doesn’t seem out of kilter.

Yet, like a good chef, Dennis Fano’s vision is all about high-quality ingredients and a simple recipe. There’s nothing ‘new’ here, shape aside, but in combination with those quality ingredients and a really well-sorted build, it’s quite a dish. And like so many smaller makers there are a lots of options too, not to mention colour choices, to individualise your build in direct contrast to many bigger brand’s take-it-or-leave it approach.

But there’s nothing run-of-the-mill about the guitar, from its shape and wood choice to its hardware. Then there’s one of the best feeling necks we’ve ever had our hands around. Add in the superbly authentic ageing, and this new guitar looks, feels and frankly sounds, like it was crafted decades ago, but without any issues of age. A beautiful time-travel piece on every level. If the aesthetic ticks your box, you won’t be disappointed when you get one in your hands.