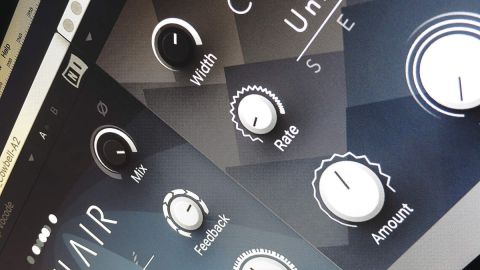 A trio of slick, creative effects stocked with lots of creative presets, all at a very reasonable price.

These three effects - Phasis, Choral and Flair - each replicate tried and tested hardware-style effects, but with a few unique tricks up their sleeves.

Phasis initially appeared towards the end of last year as a free download for existing NI gear owners (and those who grabbed it at the time can claim a £15 discount on the full Mod Pack). As you’d expect with a software phaser, Phasis has controls for adjusting the amount of notches applied to the frequency spectrum, along with the feedback (or resonance) of these.

Width, modulation Rate, Delay and Feedback controls allow each mode to be tweaked to taste. Flair is the most interesting of the trio. Here we get a flanger effect powered by four separate comb filters, referred to here as Voices. These voices can be added at a variety of different preset harmonic intervals, effectively allowing the plugin to act as a chord generator.

There are three different modes dictating how these voices interact: standard, where these stacked voices behave like a regular flanger; Thru Zero, which behaves more like a pair of classic tape machines; and Scan where Flair cycles through the voices creating an arpeggiator-like effect.

While none of the Mod Pack effects feel like they’re short on controls, each does keep things fairly simple, generally limited to no more than eight or nine parameters crammed on to the small (but resizable) UI.

This is clearly done to optimise each for use with NI’s Maschine or Komplete Kontrol hardware, but it also results in making all three effects approachable for quick tweaking. A healthy crop of presets for each helps too.

NI describes the Mod Pack effects as being an upgrade to your DAWs stock modulation effects, and that sums them up pretty well. Each provides quick, classic effects but with a few unique touches that set them apart from their peers. Priced at £60 for the three, these are a must-buy for Maschine/Komplete Kontrol users, but come highly recommended for anyone after a quick source of creative effects.