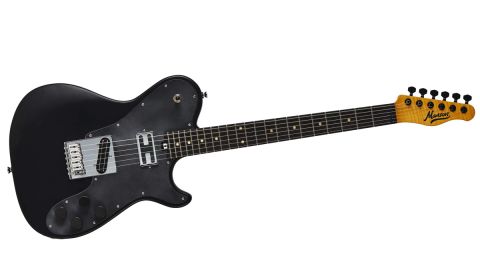 The only thing this guitar doesn’t come with is a stage and an audience - that, we’re afraid, is entirely down to you.

Hugh Manson could well have become (like his brother Andy), an enigmatic uber-custom guitar maker with an order list as long as both his arms.

But while Andy chose the primarily acoustic route, Hugh followed his rock ’n’ roll DNA, most famously making a diverse and eclectic number of instruments for Muse’s Matt Bellamy, not to mention Zep legend John Paul Jones and Foo Fighter’s Dave Grohl - instruments heard and seen by millions. And, along the way, he founded a retail store and Manson Guitar Works.

The latest pro to be seduced by Manson’s charms is Skindred’s Mikey Demus with two closely related models based on Hugh’s simple but hugely functional Telecaster- based design. Like the MA models, the woodwork/spraying of the MD-1 and MD-2 we have here is done in the Czech Republic. Manson’s head luthier, Tim Stark, explains more: “Once they arrive in the UK they are individually assigned to each customer order. All the electronics work and assembly are then done in-house with our custom-built circuits and are wired with our new CTS signature pots and Sprague orange drop caps.” Today, we’re looking at the MD-2.

The MD-2 is a close cousin to the MD-1 and starts at £1,449 in our Dry Satin Black finish. It’s graced with an unusual scratchplate, which is bead-blasted to give a textural finish. And that superb Tangerine adds £100. This price uplift, aside from a lightly flamed maple neck, is justified by a different pickup complement.

While the MD-1 goes for a single-coil-sized humbucker, Duncan Hot Rails Tele at bridge with a covered Jazz full-size humbucker at neck, the MD-2 comes with UK-made Psychopaf pickups, which we love before we’ve even heard. Why? Anyone who calls a pickup a P-45 Dismissal gets our vote - although the British Rail Iced T ‘Bi-rail’ humbucker, fitted in the bridge here, comes a close second (paired with their most classic Benchmark humbucker at neck). This MD-2 comes with an optional Cybertron partial pickup cover and larger diameter knurled-edge control knobs.

This guitar is not ultra-light in weight, but feels very purposeful when strapped on. Typically, as with virtually every modern Manson solidbody we’ve played, it has a lovely vibrant and strong acoustic response. The neck has a well-shaped full ‘C’ profile and quite beefy feel - approximately 43.5mm at the nut, a shade under 22mm deep at the first fret filling out to nearly 24mm by the 12th.

The MD-2 is a fine surprise. No, it doesn’t capture the depth of a jazzbox (how could it?), but the warm clarity in neck certainly covers plenty of jazzier styles and you can move through numerous genres (all hinting at a Tele), while the bridge pickup is less forceful.

Even if Mikey Demus isn’t on your radar, don’t worry. Aside from specification there’s nothing that’s overtly ‘signature’ here. What we have is a typically Manson, fit-for-purpose road-warrior solidbody that has a hugely purposeful feel. We can’t stress enough how tuned in and stable this guitar feels. The only thing this guitar doesn’t come with is a stage and an audience - that, we’re afraid, is entirely down to you.