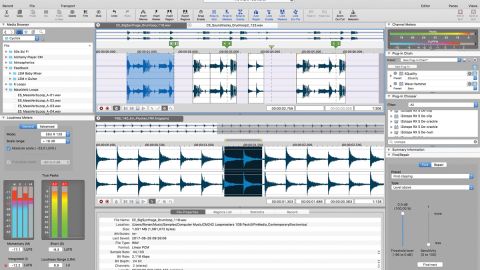 With its solid features and functionality, plus some tasty iZotope goodies, the latest Sound Forge Pro Mac is the best yet, despite falling short of its Windows sibling.

With Sony unwilling to put any great resources into its Sound Forge audio editor (acquired from Sonic Foundry in 2003 when it was PC-only, and joined by a ground-up Mac version in 2012), German stalwart Magix has stepped in and bought it, and is promising to restore this once-keystone studio app to its former glory.

In our review of Sound Forge Pro Mac v1 we lamented its relative simplicity in comparison to the superior PC version - and alas, this disparity still remains. Sound Forge Pro on PC is currently at v11, with v12 coming later this year; and although it wouldn’t be at all fair to suggest that it’s eight generations ahead of the Mac version in anything but age and numbering, there are still a few important things missing, including spectrum analysis, video support and built-in batch conversion (you get the separate Convrt app instead).

Anyhoo, we are where we are, and despite being relatively lightweight in comparison to its nearest competition - Steinberg’s megalithic WaveLab - Sound Forge Pro Mac 3 has plenty to offer the Mac-based producer.

If it ain’t broke

Two of Sound Forge Pro Mac’s defining features have always been the configurability of the GUI and its two distinct editing modes, both of which are unchanged in v3. The many panes of the interface (Media Browser, meters, Recorder, Plug-In Chooser, Regions List, etc) can be freely moved around, and two main waveform Edit windows can be opened at once, each housing its own tabbed series of audio files.

In Time mode, edits are made in the usual way, selecting regions within an audio clip for cutting, copying, pasting, processing, etc. In Event mode, the edit window effectively becomes a DAW-style ‘track’, on which audio clips are arranged and edited for eventual rendering as a single file. It’s all good stuff, and the software’s general workflow and fluidity are smooth enough, although the continuing lack of a window layout recall system is frustrating.

The most notable new features in Sound Forge Pro Mac 3, beyond the bundling in of iZotope’s RX and Ozone Elements (see Conquering the Elements), are the addition of five internal plugins, Loudness Levelling and the Find/Repair tool.

The plugins comprise Noise Gate, Chorus, Simple Delay, Reverb and Flange/Wah-Wah, and are all perfectly serviceable if you don’t have better third-party options available (which you almost certainly do). The drab, generic GUI they share, however, doesn’t exactly impart any sense of professionalism or character.

Magix is making a lot of noise about the bundling of RX 6 Elements and Ozone 7 Elements with Sound Forge Pro Mac 3, and understandably so, as these cut-downs of iZotope’s superlative spectral audio editing/ restoration and mastering suites sell on their own for £99 apiece. RX 6 Elements comprises the main spectral editing interface of RX 6 and four of its audio repair modules: Voice De-noise, De-clip, De-click and De-hum - the essentials of music restoration. The main editor is standalone, so you have to export/import between it and Sound Forge to use them together, but the four modules also install as individual plugins. Ozone 7 Elements is a preset-driven mastering plugin, powered by the algorithms of iZotope’s legendary Ozone 7. Over 70 presets are onboard, each of which has its own underlying effects chain and is tweakable via EQ Amount and Dynamics Amount macros, and the Maximizer Threshold slider. As excellent as RX and Ozone Elements are, they’re separate ‘things’, rather than being part of the core of Sound Forge Pro Mac 3 Mac itself, and since not everyone’s going to want either/both - and indeed, some might own one or both of them already - we think there should be an option to bring the price down by foregoing them.

Loudness Levelling is a new entry in the Tools menu that, when activated, automatically adjusts the loudness of the selected audio file to make it compliant with the EBU R128 or ATSC A85 broadcast standards, as selected in the Loudness Meters’ Mode menu.

The Find/Repair tool is a two-tabbed panel. In the Find tab, you tell the engine what to look for in the selected audio file: ‘Glitch’ (clicks and pops), ‘Level above’ (the next point at which the level exceeds a specified threshold), ‘End of silent region’, ‘Largest peak’ and ‘Clip’ (places markers at all points in the waveform where the signal exceeds a specified clip level).

The controls in the Repair tab then handle selected glitches and overs in one of three ways: ‘Interpolate’ joins the ends of the wave on either side of the selection with a straight line; ‘Replace’ overwrites the selection with the material immediately preceding it and crossfades the edges; and ‘Copy other channel’ replaces the material one stereo channel with that of the other. It’s a fairly simple system, but for basic fixes, it gets the job done.

The remaining new additions to SFPM3 are less attention-grabbing but worth mentioning. Mastered for iTunes auditioning lets you hear how your masters will sound when uploaded to the iTunes Store; expanded plugin support now takes in AAX and RTAS as well as VST and AU; and although video playback is still notable by its absence, you can at least now import audio tracks from video files.

There’s lots to like about the latest Sound Forge for Mac, but quite a few annoyances, too. The manual uses OS X’s awful built-in help interface (PDF, please!); the right-click menu is woefully understocked; and spectral analysis and batch processing require separate apps, to name a few.

Alarmingly, there also doesn’t appear to be an upgrade option for owners of v2 right now, although we hear that Magix will be offering one at some point. Until that happens, we certainly wouldn’t recommend that existing users pay full price for what, iZotope add-ons aside, seems more like a point release than a full version update.

Taken on its own terms, Sound Forge Pro Mac 3 is a flexible and thoroughly usable audio editor with manageable weaknesses and omissions. If you don’t need those iZotope goodies, however, the price could prove hard to swallow, and we can’t help feeling it’s about time parity was achieved with its PC counterpart.