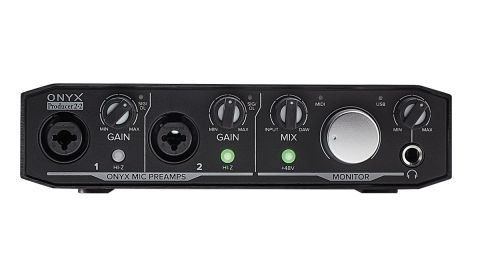 The multitude of compact 2-in/2-out USB interfaces can be bewildering, not least because, for such a simple concept, there are a lot of variants and price points.

Mackie’s latest units, the Artist 1.2 and Producer 2.2 (which we have on review), are at the simpler and more affordable end. Even so, with high quality Onyx mic pres, balanced analogue connectivity and operation up to 24bit 192kHz, they’re perfectly capable of getting clean signals in and out of your DAW. Throw in the robust metal case and you’ve got a compact workhorse device that should last for years.

The Onyx Producer 2.2 features two identical mic/line inputs with combination XLR/jack connectors. Each has a manual green backlit switch to select a Hi Z instrument, and there’s a global backlit switch for 48V phantom power. The unit itself is USB bus powered, and there’s no option to use an external PSU, which keeps things simple. Input signals can be monitored with zero latency using the Input/DAW Mix knob and rounding off the front panel are a large Monitor level knob and headphone output with level knob. Round the back you’ll find a pair of 1⁄4” jacks for the monitor output, and also a pair of MIDI connectors (In and Out), so the Producer 2.2 also doubles as a MIDI interface, which is handy.

The Onyx Producer 2.2 uses the built-in OSX Core Audio drivers and there’s a downloadable USB driver for Windows 7 or later. Once up and running you’ve got a bunch of green and green/red LED indicators (signal level, MIDI input activity and USB connection), so you can see at a glance what’s going on.

The unit is pretty compact and the layout self explanatory. We particularly like the rubberised gain knobs as they’re easy to grab even though the knobs are quite small. The headphone output is also nice and loud. The unit has rubber pads on the bottom and this combined with its weight makes it nice and stable when you’re plugging up leads or adjusting settings. If you’re new to recording there’s also a bundled copy of Tracktion T7 with the DAW essentials plugin pack so you won’t need an additional DAW to get started.

So, any annoyances? First up, the Input/DAW Mix control influences both the headphones and Monitor output. Not a biggie, but the balances we need for headphones and monitors are often quite different, so if you’re recording someone else and want your own blend in the monitors, that’s not an option. Furthermore, staying on the subject of the Mix control there was also a bit of bleed through from the DAW output even when the knob was turned totally to Input. Again, not unusual in this sort of device, but worth mentioning.

Nevertheless, we think Mackie have done a pretty good job here, delivering a no-nonsense, robust interface, capable of excellent fidelity that you can still slip into your satchel. Bravo.