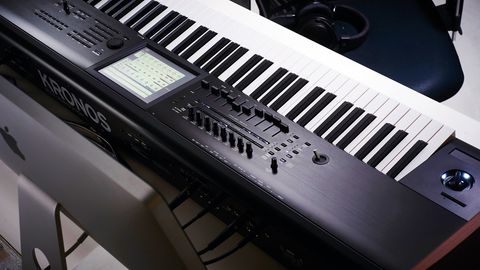 A subtle evolution, but one that keeps Kronos firmly at the top of the diminishing workstation pile.

Back in 2011 we were one of the first reviewers to get our hands on Korg’s Kronos.

Six years later, the second generation Kronos is now doing the business for many gigging and touring musicians. Back in 2011, the workstation concept was still going strong, but with many touring professionals and producers moving to software-based setups, (Mainstage, Cubase, Ableton etc), the workstation concept has lost some traction, with Yamaha Roland dropping their flagship workstations.

This leaves Kronos remaining as the chief workstation contender in 2017. The Kronos range includes the 61-note model with synth action (one of the nicest synth actions around), the 73-note weighted version, the 88-note weighted version (which is the subject of this review), and the recently added Kronos LS-88 which features a lighter-touch 88-note keyboard for those that require a lighter full-length keyboard without the weighted feel.

The review model’s 88-note RH-3 graded weighted keybed (with velocity and aftertouch) feels well balanced and gives a very authentic piano playing experience when paired with the EP-1 or SGX-2 engines, and the keybed feels much-improved over the last RH3 version we tested.

All models feature the same nine engines, each of which deals with a specific type of instrument/engine, and all the familiar Korg operational modes are onboard too, such as Combi (multi), Program (single), Sampling and Sequencing. Then of course there’s the powerful FX engine with up to 12 insert effects per-program, with two master effects and two ‘total’ effects too.

There are 185 effect types including delays, compressors, EQs, envelopes, choruses, phasers, panners, delays, reverbs, decimators, cabinet models and a vocoder. The newest engine included as part of the 3.1.0 OS is SGX-2; a premium acoustic piano engine which now includes a splendid ‘Berlin’ grand piano alongside the already well-respected Japanese and German grands; this engine has also been further enhanced with the addition of modelled sympathetic resonance (the sound of case/string resonance) along with soft pedal ‘una corda’ samples too. These important features greatly enhance the authenticity of the already excellent SGX engine.

Next there’s the superb EP-1 engine, which deals with various Rhodes and Wurlitzer EPs. These all sound very authentic, and for

personalising your sound, you can tweak details including note attack noise, harmonics, damper release and hammer tip width. The HD-1 PCM engine is a sample-based engine featuring a two-oscillator system that draws from the 1500+ onboard multisamples and the 1300+ drum samples at its heart.

This is your main staple sound engine, providing a wide range of high quality samples for general studio and live duties, plus Wavestation-derived ‘wavesequencing’ for constantly evolving soundscapes. The AL-1 engine is the go-to engine for authentic analogue emulations and features everything you need to build classic poly or mono analogue sounds and more besides. Once again, the sound quality is excellent and alias-free, and this engine also has its own step sequencer too.

Kronos’ powerful sequencer features 16 MIDI tracks and 16 audio tracks, and includes real-time and step recording, a drum track, audio editing, WAV file import and simultaneous recording of up to four sources to the onboard 62GB SSD drive. It’s great for quick idea capturing or full song productions, though it could really do with a proper piano roll display for deeper editing. Korg does have a Kronos sound editor and librarian (standalone and plugin) but unfortunately it can’t edit sequence data.You can sample and re-sample in any mode, import audio files (WAV/AIFF/MP3) via USB and drop them into Kronos to use as part of a Program, Combi or Sequence. You can also multisample any keyboard or instrument with SPDIF/USB, or from the rear 1/4-inch audio inputs, (there’s no dedicated XLR mic jack).

The CX-3 engine emulates classic tonewheel organs and their rotary cabinets, and whilst the presets lead you to believe that perhaps this isn’t the most authentic organ modeling engine around, once you dig deeper into the settings, you can get some very authentic Hammond sounds, especially when employing the panel sliders as drawbars (note you’ll probably want the 61-note or LS models if organ playing is your thing).

Following on, the STR-1 engine uses 16 modelled string types (including acoustic guitar, clavinet and harpsichord) coupling them with modelled pickups and the ability to use sampled oscillators too. It’s great for making realistic electric or acoustic stringed instruments, but it can also go way beyond this.

MOD-7 is a super-powerful FM engine (VPM in Korg-speak) which can also handily import DX7 patches. Like all FM engines, it’s pretty complex (so best approached via one of the many Mod-7 presets initially) but once you’re feeling braver, initialise a patch and get stuck in; the results are great and will have you selling your old Yamaha FM machines pronto!

The final two engines (MS20EX and PolysixEX) are based on the MS-20 and Polysix. and both sound great - nicely authentic and very

tweakable. Anyone with the real deals, (or Korg’s Legacy Collection software) will feel immediately at home. Also, now that you can drag values across the screen, editing on these engines (and on the Kronos in general) is much more enjoyable.

Existing Kronos or Kronos X owners will also be happy with the new OS, which is freely downloadable (although the new soundbanks need purchasing). Quick keysplitting and layering is a great new addition, along with many signature presets and famous sounds (including one of the most authentic Herbie Hancock Chameleon basses we’ve heard).

Then there’s the enhanced Setlist feature for quickly selecting sounds. Hardware-wise, there’s a new rear mesh grille, and the new wooden ends add a touch of class. Everything is reassuringly solid too, as you’d expect at this price point. Downsides are few, but we’d still love to see the Odyssey engine and perhaps some bits from Gadget included. Regardless, if you want a workstation, Kronos still reigns supreme!