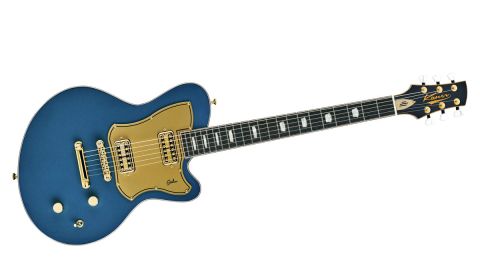 This is a simple electric guitar that is solely centred on sound with a very original yet familiar style.

As the person who has to fill every issue of Guitarist with gear, this writer is constantly getting it in the neck for displaying expensive guitars.

Well, here’s another one, this time from the Sacramento-based Kauer Guitars, headed up by Doug Kauer who shipped his first guitar in 2008: “11 years now! Kind of amazing that I haven’t gotten a real job yet,” he laughs.

Generally, it’s a four-man team that creates the instruments, as Doug explains: “I’m primarily responsible for design and programming, the business, some machining and mainly paint. One guy handles the necks start to finish, most of the woodworking, machining and sanding. I have a full-time assembly person; he takes over after paint and does final fretwork and final assembly - wiring, making the pickguards and so on. The fourth [team member] floats between our DRSracks.com line and doing more and more CNC machine work and glue-ups.”

It might surprise some that Kauer uses a CNC, but it’s helped the company produce some 750 guitars since 2008. “There are just over 300 Banshee serial numbers and 300 Daylighter/Arcturus and roughly 150 between the Starliner, Argonaut, Super Chief and some other things that have come and gone,” says Doug. Not only that, Kauer has also introduced a budget line, Titan Guitars, of which the team has produced 215 pieces so far. “We’ve been so busy with Kauer the last few months that we’ve shifted Titan to dealer-order only for a while. We’re in the process of adding more staff to help us keep both lines on time and schedule.”

Of the many models Kauer has produced, only three are currently in production. “This is partially just something we like to do and it’s partially dictated by customer demand,” Doug explains. “We find it’s really just most effective for us to focus on three models at a time. We tend to let most models run about three to four years before moving them off the menu.”

Our review Starliner is a deceptively simple build that seems to put a Les Paul Special into the stylistic blender with a Jazzmaster’s offset lower bout and an almost Telecaster-like upper shoulder. “I’m a single-cut and offset junkie at heart,” says Doug. “I wanted to design something that would be in a familiar-ish camp for people who like Les Pauls but something that was uniquely Kauer and addressed some of the ergonomic concerns with those guitars. There’s also a bit of Claudio Pagelli’s influence in the Starliner - we’re just such giant fans of his designs - and the Gretsch Super Chet. All favourites of mine.”

Apart from the almost jet-black wenge fingerboard, the Starliner is made entirely from Spanish cedar, “a close relative of Honduran mahogany but it has a cedar-like oil and smell, hence the name,” Doug told us when we caught up with him previously a few years back. The wood choice results in a beautifully weighted guitar, too.

There are numerous custom options on the Starliner platform, including a single-pickup model (Jr) or, as here, the two-pickup Express. “I absolutely love that Starliner Express you have. I was actually kind of bummed to sell it! Those ‘White Falcon’ bound ones were part of a limited run we did and that was the last one.”

Well, Doug’s loss is our gain. The little bling here is entirely old-school with that retro-y Gretsch influence via the TV Jones pickups, the gold spray-backed scratchplate, and the deliciously subtle orange sparkle binding that’s seen around the top end of the body, the fingerboard, and even makes its way into the Kauer logo on the otherwise simple and understated back-angled headstock. Fit and finish is superb - as you really should demand at this price. Look closely and there are numerous fine details: the slotted gold-backed truss rod cover, the heavily fluted, highly polished bone nut. To be critical, though, the inlays don’t look like they’re laser cut and there’s a slight furry edge to the white base line under that sparkle binding.

The simplicity of the design - not least the completely slab body with no contouring front or back - might have some asking, ‘Where’s the flame top or fancy inlay work?’ That’s not Doug Kauer’s bag. Instead, the deep-set neck foot sits under the neck pickup; there’s quite a rake to the back angle, more akin to a Les Paul than our shallower raked Les Paul Jr. It means the TonePros Nashville-style tune-o-matic sits quite high on the body, yet we suspect this geometry plays a part in both feel and the sounds we’ll get to hear.

There’s very little fancy going on with the electronics. The Gretsch-like top-knurled metal knobs and metal-tipped three-way toggle switch look the part, while that inset Electrosocket output jack mount is a perfect match. It even comes with Dunlop Straplok Dual Design buttons that work with any strap or the correct Dunlop locking inserts.

The small recessed plastic backplate is engraved with the Kauer Guitars logo, serial number and the company ‘motto’ (“Made in the USA by men with beards and hammers”) and covers a very tidily wired circuit using Emerson Pro 500k pots, modern style wiring, albeit with the essential cloth-covered wire and a large 250-volt green Russian K42Y-2 paper-in-oil (0.047microfarads) tone cap.

Rather like the design (which is quite original but seems almost like something we’ve seen before), the neck shape here disappears. It’s actually quite wide at the nut at 44.13mm with a wider-than-usual string spacing of 36.5mm. In terms of depth, though, just after the slight volute behind the nut, it measures 21.9mm at the 1st fret, 23.4mm by the 12th: a really playable mid- depth neck and the subtly wider dimension didn’t bother us in the least. The fretwire is well chosen, too, not too big or high and each fret is finely fettled. There’s nothing remotely retro about the really easy top-fret access, either. Everything is about the playing experience, it seems.

From the moment you strap this on and have a quick couple of strums, it all feels and sounds just like it should. There’s a lovely smooth, balanced acoustic ring; both body and neck are lively and vibrating. On the strap, that weight is a real pleasure, too. As we ease into some clean voices, we’re not hit with the huge power that the pickups might suggest: the bridge is slightly more relaxed than our reference ’57 Les Paul Jr, but we have a richer, more velvety voice with a smattering of Gretsch sparkle. The neck matches beautifully, while the mix emphasises its Gretsch-like DNA, particularly if you pull the volume back and add a little slapback echo. Both volume and tone controls are nicely weighted, and on a guitar as simple as this, you really have to use them to begin to coax some pearls. It’s hugely Mike Campbell or Peter Buck - just pulling back the tone suggests a little Rickenbacker’s slightly rounder-nosed snap. There’s clarity but no ice-pick edge.

It’s as we up the crunch that the Starliner settles into its stride and begins to sound way bigger than the sum of its parts. All too soon we’re Neil Young-ing the hell out of the thing. There’s a beautiful sweet spot where, with enough sizzle and volume, you can just lean into your amp and coax some stellar on-the-end-of-feedback sustain before pulling back its volume control for strummier, jangly rhythm. We didn’t touch a thing, either. It is beautifully set up, everything perfectly dialled in. We’d happily take this on a gig anywhere. A first-class musical instrument.

Doug Kauer has a well-deserved and growing reputation in the boutique world, and after reacquainting ourselves withone of his builds, it’s easy to see why. This is a simple electric guitar that is solely centred on sound with a very original yet familiar style. Its hardware, pickups and electronics are all off-the-shelf, there’s no tricky switching or innovative features. But this straightforward approach all mounts up to a simply gorgeous-sounding, road-ready guitar that is an absolute pleasure to experience. Whether that is enough to justify its price or place in your collection is much harder to evaluate. It’s a dilemma more and more of us are facing: whether to stick with established mainstream brands or take a punt into the boutique world. If you do, Kauer shouldn’t let you down.