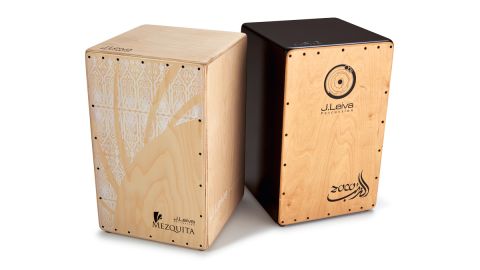 Originally founded by José Leiva, the Spanish company J. Leiva Percussion is now headed up by José’s son Pepe and it boasts a vast range of cajons and accessories.

These include a foldable travel model, a transparent acrylic model and even a design with a carbon fibre front plate. With a reputation for offering respectable entry-level instruments as well as top quality pro-level products, we have high hopes for a couple of J. Leiva’s latest models.

Both review cajons represent an evolution of previous J. Leiva models that have been treated to some aesthetic upgrades.

The Sweetspot cajon is based on J. Leiva’s popular entry-level Zoco model with which it shares the majority of its characteristics. The chassis is constructed from 12mm MDF that has been treated to protect it from humidity, and is painted externally with a bi-component epoxy paint that gives the cajon a smart gloss black finish.

The 3mm frontplate (tapa) is made from 100 percent Russian birch and has a natural finish that appears to be lightly varnished, leaving the wood smooth to the touch. With the ‘J. Leiva Percussion’ logo just above centre and the Zoco print located at the bottom right of the tapa, this new model would appear identical to the original Zoco if not for the new and unique Earth Pi crop circle design.

This latest addition is where the Sweetspot gets its name as the design shows the player exactly where to strike in order to achieve the best bass tone from the instrument. There is also a smaller debossed logo on top of the cajon body.

The Mezquita Natural cajon is identical to J. Leiva’s Alma model except for the new artwork displayed on the tapa. In addition to the white of our review model, the sunrise-style pattern is also available in red. The slightly more expensive Mezquita features a 12mm all-birch body that is, once again, 100 percent Russian.

Both cajons use J. Leiva’s proprietary Direct Tension System (DTS) that allows the snare response to be tuned without the need for any tools. The system uses guitar strings tensioned vertically across the back of the playing surface, which can then be tightened or loosened using a dial on the back panel of the cajon.

A long rod stretches all the way across the depth of the cajon from back to front and attaches to a small square of wood at the other end, which in turn pushes against a horizontal beam that pins the strings to the playing surface.

The Mezquita uses two strings that are doubled back on themselves and each one has its own tension rod. The Sweetspot has just one string, doubled in a V-shape for maximum coverage. Both cajons are a standard size of 48cm x 30cm x 32cm and come supplied with a black rucksack-style carry case.

Although the Sweetspot takes the prize for producing the lowest pitched bass note, the Mezquita offers a purer and more pleasing resonance with a dryness to its tone that is complemented well by the extra strings - giving edge notes a tighter snap.

The Mezquita offers a balanced snare response, while the sonic characteristics of its birch body make for a generally more responsive and high-quality sounding instrument.

We had difficultly achieving the desired snare sound with the Sweetspot. It seemed that no matter how we tensioned the strings, there was a subtle yet ever-present buzz, which caused a slight hum on the back of the playing surface.

Having said that, the Earth Pi crop circle marking did as advertised in highlighting the purest bass note available on the playing surface. The surprisingly high sweet spot makes it very easy to play and means less leaning forward whilst playing - particularly useful after a heavy lunch!

The smooth and rounded edges of the Sweetspot make it comfortable to play, especially at the edge. The tapa of the Mezquita doesn’t sit quite as flush to the body of the cajon and, in fact, protrudes a little further at the middle than it does at the edges.

We also noticed that the finish around the Mezquita’s sound hole would benefit from further sanding to increase smoothness. The supplied Soar Valley carry cases appear heavy duty and feature a small front pocket in addition to some light in-built padding. They’re robust enough to prevent any scratches or dings but, most importantly, the backpack-style straps should make taking your cajon out for busking a doddle.