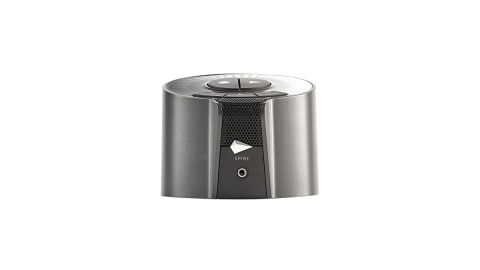 Spire acts as a conduit between the creative spark and polished product. Pro-level recording on iOS has never been easier.

We first checked out the multitrack recorder Spire back in 2015 when it was just a mere iOS app.

Fast-forward a couple of years and the impressive new upgrade with its sleek new hardware additions - already out in the US for a year - has finally reached our shores.

Designed to be portable, the unit itself is reassuringly weighty, if a little cumbersome (for a mobile-centric device). Featuring an onboard, front-facing omnidirectional microphone and two XLR/TS combo ports around the rear, with phantom power switching, Spire connects to your iOS device via WiFi. Two 3.5mm headphone ports round off the audio connectivity; one located below the mic and one on the rear, while audio is captured at 24-bit/48kHz.

The hardware very much keeps alive the original mission of capturing ideas quickly. We were able to capture recordings right away, without even needing the app. Not only is speed a priority, but also sound quality. To be sure of achieving the best possible recording, Spire features a one-click sound-checking function, which is as simple as it sounds.

On pressing the button you have a short period where Spire monitors the inputs and balances each channel accordingly, which really takes the guesswork out of mic placements and recording levels. Headphone volume (which uses the touch functionality of the LED light-guide), play, record and a ‘new recording’ button round off the simple layout.

The original app used iZotope’s vast heritage of audio processing and continues that here. The layout is familiar to those who used the original version. One feature we felt was lacking, previously, was the ability to trim audio files. This new edition doubles the number of tracks to eight and a trim function has now been added. Despite the eight tracks, only two can be recorded simultaneously and plugging into the first input will defeat the onboard mic. To preserve the mic you’ll need to plug your external source into the second input.

Editing tracks can be achieved within the app with very simple mixing and DSP options at your disposal. Various amp models, reverbs and delays are available, so you can effectively polish a whole track within the Spire ecosystem and publish to social media directly. Alternatively, if you feel your project could do with some finer tweaks, a stems export function is also available for easy transfer of any recordings to your DAW.

It may seem pricey for a two-in, two-out interface, especially one tied to iOS, but as a standalone recorder it’s worth it. The speed in which you can lay down ideas is perfect for creative types, backed by powerful iZotope software tools to take those ideas to fruition. In future we’d like to see the hardware opened up to all platforms, with MIDI added. For now though, Spire Studio ticks lots of boxes for anyone looking to expand their iOS production setup.