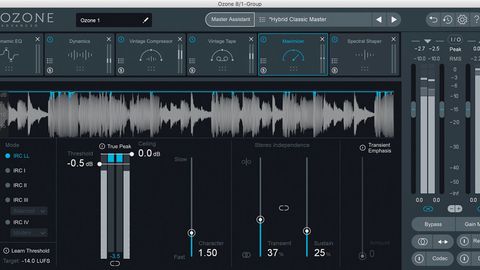 Master Assistant might be the big story, but it’s the other enhancements that make Ozone 8 such an irresistible upgrade.

We don’t know how iZotope manages to keep finding new things to add to its acclaimed software mastering suite Ozone (VST/AU/AAX/RTAS/standalone), but find them it does.

Ozone 8 might look like a relatively lightweight update on paper, but what its major new features lack in number they make up for in novelty, focusing on automated mastering, integrated referencing and inter-plugin communication.

As usual, Ozone 8 is available in three increasingly feature-rich versions: Elements (£100), Standard (£195) and Advanced (£389). The latter is the subject of this review, and you can check details of the others on the iZotope website. iZotope have changed the look of the software once again for v8, matching it to the simultaneously-launched Neutron 2 (which we’ll be looking at next issue).

While we generally don’t have any particular feelings regarding the new iconography, buttons, etc, the smaller text in certain areas feels like a step backwards. We approve of the repositioning of the module chain and presets menu at the top, however.

With the Neutron channel strip, iZotope put the currently-hip field of machine learning at the forefront of its technological arsenal (and marketing). In the case of Neutron, this gave the onboard Track Assistant the ability to identify instrument types via a sizeable database of sonic signatures.

Ozone 8’s Master Assistant expands on that by using machine- learned algorithms built on ten genre-encompassing spectral curves to guide the decisions made by an intelligent automation process in tweaking EQ and dynamics settings to get you to a good starting point for your master.

Click the Master Assistant button, choose Streaming or CD or as a loudness Target (and Low, Medium or High as the Intensity with the CD option), or load a reference track of your choosing, then play back 30 seconds of the project at its loudest point.

Master Assistant decides how much to draw on each genre profile in creating a unique spectral curve - or bases it to the loaded reference track - that’s then imposed on the target track through the automatic loading and setting of Equalizer, Dynamics, Dynamic EQ and Maximizer modules.

A separate, included plugin, Tonal Balance Control (Advanced only) facilitates viewing of a track’s spectral distribution relative to one of three target curves defined by analysis of thousands of mastered tracks, and acts as a central control station for the EQs in all running instances of Ozone 8 and Neutron 2 Advanced. In Broad mode, the analyser divides the frequency spectrum and target range into four easily read blocks, while Fine mode gives a full, high-res view of the spectrum and target for detailed comparison. The idea is to place Tonal Balance Control on the master out and adjust EQ settings throughout the mix to get the white spectrum curve to fall entirely within the green target range, which is selected from three preset types (Bass Heavy, Modern and Orchestral) or any number of analysed tracks from your own library. The low end Crest Factor is also displayed in a three-segment meter - keep it in the centre segment for optimum results.

A menu enables selection of any active instance of Ozone 8, Neutron 2 or their module plugins in the project, bringing up the EQ controls and a spectrum analyser for EQ and Post EQ, and just the analyser for all others. It’s a great system, although it only works with EQ in stereo mode, not mid/side.

Like Neutron’s Track Assistant, as long as it’s approached with realistic expectations - ie, that it’s really just suggesting a starting point from which to dial in your own settings - Master Assistant is a solid enough system. What it absolutely isn’t is a quasi-magical one-click virtual mastering engineer. While the chains it came up with for our test tracks were definitely in the right ball park, they always required at least moderate editing and balancing.

Ozone 8 Advanced also sees the addition of the Spectral Shaper, a frequency-conscious dynamics module for effortless ironing out of harshness and other objectionable high-end noises.

Set a frequency range for processing (that of your overly sharp hi-hats, for example, or vocal sibilance), choose Light, Medium or Heavy gain reduction, lower the Threshold as required, tilt the spectral timbre with the Tone slider, shape the envelope with the Attack and Release controls, and marvel as those hi-hats or ‘esses’ sink smoothly back into the mix without affecting quieter sounds in the same spectral neighbourhood. It’s a brilliant instant problem solver that slots perfectly into Ozone’s rack.

The new Track Referencing feature is a simple but useful system for A/B comparison of your master with up to ten imported tracks. Ozone’s machine learning algorithm is deployed again to set markers on the reference tracks, segregating sonically consistent regions - ie, verses, choruses, etc - for looped playback.

The detection of these is variable in its success, but markers are easily moved, deleted and created. Flipping between the active reference track and the input signal is done with the Reference power button, and the curve and level of the reference track can optionally be set to appear in all module spectrograms and the input meter.

With the headlines delivered, we just have space to blast through the rest of the changes. The Exciter module can now run a separate saturation algorithm for each of its four bands -superb! The Maximizer’s IRC LL mode is a low-latency version of IRC I, while activating Learn Threshold continuously adjusts its Threshold slider to match a specified LUFS target, and the Stereo Independence controls improve on the previous Stereo Unlink slider by separating transient and sustain portions for discrete stereo linking.

Finally, frequency bands are now linkable In the Exciter and Imager, as are the Maximizer Threshold and Ceiling.

The Master Assistant is impressive, for sure, but we worry that inexperienced producers will put more faith in it than is warranted, rather than learning the art of mastering for themselves. We like the ‘curve-targeting’ implementation of Tonal Balance Control, too, but we’re not sure how much we’re likely to use the multi-EQ access, given that we generally only run a single instance of Ozone in any given project. For Neutron, though, absolutely.

It’ll come as no surprise to see yet another high score footing Ozone 8’s review. It’s ridiculously powerful, every one of its modules sounds incredible, and for in-the-box mastering made as accessible as it can be, there’s simply none better.