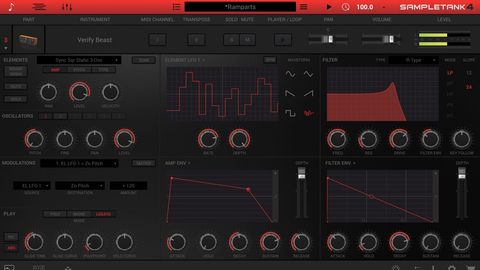 SampleTank hits a new level of refinement and versatility with its cavernous soundbank and supercharged interface.

It’s been four and a half years since the arrival of the last full version update to Italian software/hardware powerhouse IK Multimedia’s SampleTank (VST/AU/AAX/Standalone) sample playback synth.

Described in our review of version 3 as “big and beautiful, if not particularly bold”, this 16-part multitimbral workstation aims to put an enormous and comprehensive library of lovingly recorded drums, basses, keys, guitars, synths, strings, brass, ethnic instrumentation, FX and anything else you can think of at your fingertips, quickly and easily, but with plenty of sound-shaping, processing and customisation options.

SampleTank 3 introduced a completely new - and much improved - interface and engine, Live Sets (for quick switching between ‘songs’) and more, and increased the size of the sample library from 8GB to 33GB, amounting to over 4000 instruments. As well as the new features that will be the focus of this review, SampleTank 4 MAX smokes those numbers, weighing in at an insane 260GB, with 120,000 samples fuelling over 8000 multisampled instruments (see In the ’Tank) and 7500 loops, plus 4000-odd MIDI patterns. Two lesser versions - SampleTank 4 and SampleTank 4 SE - reduce the figures considerably, for €180 and €360 respectively. See the IK website for a content comparison.

Getting this gargantuan library installed is quite a chore if you opt for the download rather than the USB drive version. The sample folders for each instrument type have to be manually downloaded as 97 separate installers, although you can download multiple files at once. Having finally nabbed them, you then have to run each one individually - 16 of them just to install the new acoustic pianos, for example. It’s by far the most tedious, long-winded library installation routine we’ve ever seen - second only to that of IK’s 23-file Syntronik, in fact - and it really is time the company put some of that hard-earned cash into the development of a proper download/ installation manager.

Once you’ve made it through the ordeal of installation, a vast and - for the most part - impressive world of multisampled instrumentation is yours to command, adding over 200GB of entirely new material and previously separate expansion packs to the SampleTank 3 library (also included).

Recorded at numerous studios around the world, as well as IK’s new facility in Modena, the ST4 library prioritises the depth of its headline instruments as much as it does the sheer volume of its sounds. The new Yamaha C7 grand piano (145GB), with its multiple mic setups and treatments, is absolutely beautiful, and the other keyboards (electric pianos, clavs, etc) aren’t exactly shabby, either. ST3’s awesome selection of acoustic and electric guitars was already a triumph, but ST4’s 25GB stash trumps it for both depth and variety.

Similarly, the fresh multi-articulation strings, brass and woodwinds can be made to sound wonderfully realistic, and a ton of drums (12 new acoustic and 107 electronic kits - 65GB) and percussion provide the source material for polished beats of all kinds. And for electronic musicians, a veritable goldmine of dance music sounds includes 22GB of colourful new basses, leads, pads, plucks, sweeps and FX.

Fortunately, once that’s all done, SampleTank 4 makes an immediate good impression with its completely redesigned, resizable, Retina/HiDPI-compatible GUI. The whole thing looks fabulous, doing away with the old-fashioned visuals of ST3 and making every component infinitely prettier (especially the effects); and the workflow throughout has been enhanced in terms of logical layout and general ease of access. The Browser, for example, now features tag filtering (Style, Timbre, etc), as well as details of each sound, including effects and Macro assignments; and the Part Edit window is a night-and-day improvement, with graphical representation and editing of envelopes, LFOs and filter response curves, amongst other tweaks. Hard disk streaming is now supported, too, for faster loading, but ST4 is fully backward compatible with older versions, as well as IK’s other libraries: Syntronik and Miroslav Philharmonik 2.

IK has had a good stab at making SampleTank feel more ‘synth-like’ with the addition of a full-on Modulation Matrix, expanding exponentially on the established hardwired mod routings. Up to 32 assignments can be made for each Instrument, drawing on all available internal sources (LFOs, envelopes and Macros), as well as external MIDI streams and CCs, and targeting all meaningful Zone and Element parameters, complete with ‘via’ modifiers. It’s a powerful and flexible setup.

In the processing and mixing departments, 13 new effects have been added, bringing the total to 70. They’re all built on IK’s proven T-RackS and AmpliTube technology and thus sound superb, and you can now view, adjust and assign Macros to all five of an Instrument’s modules together in a gorgeous new lunchbox rack-style interface (but not the Send or Master effects, oddly, which can still only be accessed via the Mixer page).

On the performance side of things, four new ‘Players’ open up various avenues of MIDI and audio manipulation, and are catered for in Live Mode by the addition of a Tempo field for each Multi.

The Arpeggiator is well appointed for arpeggiation and sequencing; the Strummer is a deeply programmable rhythmic chord strumming engine that works particularly well with SampleTank 4’s stunning guitar patches; and the Phraser lets you assign complete MIDI sequences from the 4000-strong internal Pattern library, and external MIDI files (with a bit of faffing), to note triggers. The Loop Manager, meanwhile, assigns audio loops to triggering keys, with three distinct algorithms (Resample, Beats and Stretch) enabling basic control of pitchshifting and timestretching, and granularity or harmonic content. This last is the least obviously useful part of the software, if we’re honest.

By far the biggest and most transformative update to SampleTank yet, ST4 feels so much more fluid, capable and contemporary in its design than v3 that it would be worth upgrading just for the new UI, Modulation Matrix and Player modules alone - particularly the Strummer. However, that extraordinary sound library brings incredible sonic range to the package, too, surely qualifying it as the most expansive - and, indeed, expensive - ROMpler ever made. Immense.