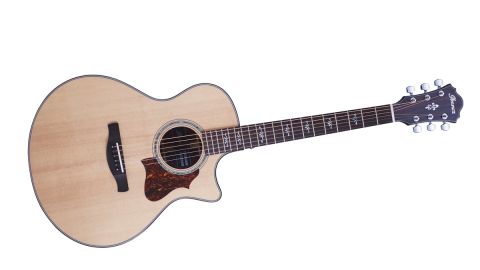 Purpose-built electro-acoustic for the working musician that cuts through anything.

Ibanez is one of those companies that have been an enigma to some.

We’ve known them, of course, yet they’ve never really drifted across this reviewer’s personal latest radar. As such, the opportunity to test-drive its latest offering was an intriguing opportunity.

A Japanese company with a Spanish name, its long term relationship with Steve Vai and latterly Joe Satriani has ensured that Ibanez has a relevant voice in the electric guitar world.

But what of things acoustic? With more than 100 different models, many at the value end of things, it certainly has a strong presence - particularly in the hotly-contested £1000-£1200 market.

They say you only get one chance to make a first impression, and soon as you open the case this little temptress doesn’t disappoint. Classic lines of the AE body, with just the right amount of bling, you instantly feel that you are looking at a quality instrument.

With a single cutaway, the top is solid Sitka spruce, this particular example having a slightly honeyed hue to it. While it has a high gloss finish, Ibanez haven’t buried the grain, which is close and textured.

The abalone and maple decorated soundhole looks classy with a small tortoiseshell scratchplate shaped into it. Around the edges the body binding is rosewood and adds, in an understated way, to the charm of the guitar.

Looking in through the soundhole, the quality of the finish inside appears to be very tidy indeed. Manufacturers can often lose their way on the headstock of a guitar, similar to the way that some cars appear to have been designed from the front without much thought to the derriere.

But we’re pleased to say this isn’t the case here. Sitting comfortably between boring and flash, the head is elegantly shaped with a thin inlay line accentuating the gentle curves.

The Ibanez logo and a central inlay are both in modernist mother of pearl.  The machine-heads are individually housed Gotoh SG301’s, which are never going to let you down with their stiff and positive action.

Moving down, the nut is bone with a rosewood fretboard decorated with a pleasing mother of pearl inlay unique to the AE500. The neck itself is mahogany with a satin finish and joins the body via a deep but comfortable heel. The back and sides are solid Indian rosewood and feature the subtle coach-lining seen on the headstock.

Electronics wise Ibanez has often partnered with Fishman in the past. But in this instance it has used its own system with something of a unique take on things. While some may find this unnerving it should be remembered that, if you were a protagonist from the dark side, you would most probably have an Ibanez Tube Screamer, or some derivative copy, in pride of place on your pedalboard…Ibanez knows a thing or two about guitar electronics.

In this instance all the controls have been taken off the guitar, shock horror, and incorporated into its acoustic guitar preamp, the AGP10, which combines as a DI box.

Of course, one of the benefits of this is that the integrity of the guitar body is not compromised in any way, the only intrusion being the input jack socket though the strap button and a tiny panel behind it where the batteries are stored.

These are two 2032 coin-style lithium batteries, there also being a mute button here which doubles as a battery test. One word of warning would be to take care when releasing the battery holder as the pesky little fellows tend to make a bid for freedom. The T bar undersaddle pickup is just what it says it is.

Moving back to the preamp, the back panel, from left to right is: input trim, standard jack input and output, DC9V power supply input, ground lift, and an XLR balanced output. On the front there are two rows of knobs, the top ones all being equalization, bass, low mid, middle, high mid and treble. Beneath these you’ll find notch frequency with a switch next to it that has three notch filter positions, narrow, wide, and off.

Centrally situated is a blue power light with a phase reverse switch and on the far right the volume control.  It’s a very sturdy little box finished in a creamy colour and comes supplied with a battery in the base which you’ll need to unwrap unless you want to lose 15 minutes of your life working out why it wasn’t working - just saying.

The Ibanez site says it can be mounted on your mic stand using a cymbal clamp, but my guess would be that it’ll spend most of its time on the floor. The AE500 comes with two strap buttons (why don’t all guitars?) and as soon as you put it on, it just feels right.

The neck, quite frankly is a dream. Featuring its advanced comfort profile to be found on all the AE range, it is slim and relatively shallow and combined with the silky satin finish makes it a joy to play.

The action is low and the intonation damn near perfect with the finish on the frets exemplary. You definitely feel this is a player’s guitar and it would sit, feel wise, particularly well with someone swapping from electric to acoustic.

Overall it is hard to think what could have been done better from the build quality point of view.

The combination of Sitka spruce, the scalloped X bracing to the soundboard and the tone projection back bracing result in a guitar that is seriously bright while still being well balanced and that definitely projects. It also sustains forever, partially thanks to the bone nut and bridge saddle.

The tone isn’t complex but given that it is all solid woods that should develop with time. Strumming gives a pleasant rounded tone with each note in the chord being discernible and finger picking is clear and balanced. Plug it in and the graphic on the preamp enables you to warm up the tone with the sweet notch system there to deal with any troublesome frequencies.

This guitar definitely has a sound that will cut through, without being harsh. We would think it would be a soundman’s dream, indeed Ibanez states that the AE500 was developed in collaboration with artistes and professional sound engineers.

Firstly let us say what this isn’t. This is not an acoustic with optional pickup to make it louder. This is a purpose-built electro-acoustic developed from the ground up for the gigging musician.

It plays like a dream, is finished to the highest level and has a tone that, while uncomplicated, will sit exceptionally well in a band situation. At this price, the AE500 is a serious contender and gives the Martins and Gibsons in this price range a run for their money. If you play in a band and have trouble cutting through this might just be what you’re looking for.