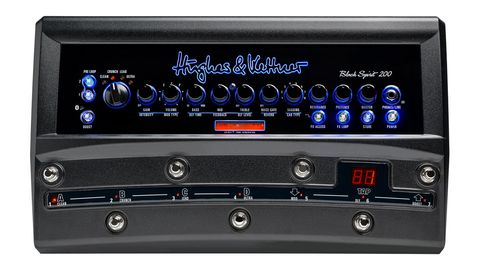 Super-tough, super-tweakable, with great valve-amp dynamics and onboard effects, the Hughes & Kettner Black Spirit 200 Floor is a tone monster

Hughes & Kettner's Black Spirit 200 Floor is what happens when the R&D boffins have a creative engineering epiphany and shrink the Black Spirit 200 solid-state head and house it in a little floor-based unit that you could sling in your backpack.

The German amp titan calls it the "ultimate floor-based guitar amplifier," and if you jump right down to the laundry list of specifications you can see why.

The Black Spirit Floor's design incorporates H&K's FSM-432 controller, and has a Direct 7 mode from which you can easily choose from seven programmable presets – one for each footswitch. You can use the unit as a normal four-channel amp or get creative with a variety of presets and use it much like a floor-based multi-effects/amp modeller. It comes with 128 presets.

There are four analogue channels: clean, crunch, lead and ultra. The other controls are the same as the Black Spirit 200 head, and these can be saved to the amp's presets. You'll also find reverb, delay and modulation, plus an onboard boost, noise gate and Sagging control – an awesome feature that allows the Floor to help mimic valve amplifier dynamics.

Among the features new to the are two programmable true bypass pre-loops, which allow you to connect your pedals without stepping on your tone, thereafter you can bring them into your signal when needed.

There is an adjustable "Monitor In" input with its own level control allowing you to  import the front-of-house monitor mix – or any external audio – and blend it with your guitar's signal. This can then be send to headphones or monitors – ideal for recording, playing live, or just as a practice tool.

You can also connect it to the PA or in-ear monitors via the Red Box AE/DI. There's also Bluetooth connectivity for the accompanying app (iOS, Android). The Bluetooth app has similar controls to the Floor's and is compatible with iPads and Android tablets, but not iPhones. At least not yet – this feels like a no-brainer for Hughes & Kettner to address, and surely an easy launch.

The Black Spirit 200 Floor is no modelling amplifier but it will give many a run for their money. It might look metal and kind of lethal – we'll get to the high-gain in due course – but it is one seriously versatile amplifier. The Clean channel can do old-school tweed tones, fat and rounded, perfect for rock 'n' rollers with some slapback delay, but it's incredible how its character changes when rolling off those mids, with a more scooped glassy tone that partners modulation nicely.

The Crunch channel is where you'll find all that sweet overdrive, from just a little hair and grit to sparkling classic rock tones that would be ideal for rhythm, but mainly because the Lead channel offers a little more saturation to make your solos really pop. It's not a million miles away from the Crunch channel but there is a noticeably more aggressive attack and a more heady gain structure.


The Ultra channel is for levelling cities, mountains, whatever is in your way, and this is where metal guitarists will find all the gain they need. Here, the tone is more compressed, the sustain and harmonics really pop, and it's hard to think of a situation where you will need more juice.

Across Crunch, Lead and Ultra channels, the gain is incredible, very much what you would come to expect from Hughes & Kettner. Using the sag control brings out the best in those tones that you find when pushing your signal just past the edge of breakup. It's so dynamic. Blues players will love the amp's response to their playing.

As for the onboard digital effects, the selection might be typical, with chorus, flange, phaser, tremolo, delay and reverb, but the quality is more than respectable. We loved the three programmable loops for your effects pedals, too. From a switching POV it makes life easy, something you'll be very grateful for when playing live.

If the onboard effects are perfectly functional, the Red Box cabinet emulation is nigh-on functionally perfect. Hughes & Kettner's standalone Red Box unit is many player's go-to option for recording direct or going straight to a p.a. and to have this onboard only adds to the Floor's practicality. As a stage or studio tool, it's hard to look past this for quality and convenience.

Where Hughes & Kettner's Black Spirit 200 Floor fits on the guitar amplifier's evolutionary spectrum is hard to say. It exists at a remove from the ranks of digital modellers, or profiling amps, and it's so much more future-forward than all-valve amplifiers. The latter will probably always have the tones that most players will chase, and in turn so too will most kinds of amplifiers, .

But the Floor is not going to fail on you. It won't need maintenance. And it'll do it all every night, and to the same high standard. When you think about it like that, with its clever MIDI switching and programmable operation, and its versatility, the Floor feels very much part of the guitar amplifier's future.

What the web says

"The Hughes & Kettner Black Spirit 200 delivers the versatility of today’s high-tech amp modelling products without sacrificing the ease of use and familiar controls (and even look) of a traditional amp."
Guitar World

"A ridiculously versatile amp in a handy stompable format."
Guitar.com