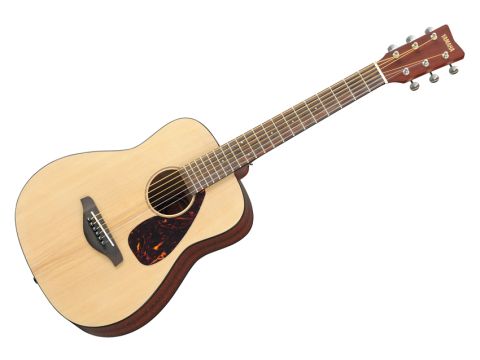 Easy to carry and packing a respectable sound, the JR2 is a guitar that's cheap and cheerful in the best possible way.

The acoustic guitar industry seems to be having a baby boom at the moment. We've seen small acoustics from giants such as Taylor and Takamine emerge this year, and as the name suggests, the JR2 isn't Yamaha's first stab at building a small guitar.

While Taylor's GS Mini feels like a 'proper' guitar that's shrunk in the wash, the JR2 is about portability and affordability first, with tone and playability a respectable second.

Build-wise, a few things have changed since the JR1, seeing this new model with an authentic-looking mahogany Ultra Thin Film finish to the laminate poly-board back and sides, and a subtly arched tidy spruce top. The styling, which apes that of Yamaha's full-size FG models, has also been tweaked to look more grown up.

First impressions are mixed: strum a chord and you'll hear a pleasant but lightweight acoustic tone, making the JR2 at home when playing fast, folky numbers.

Although hard-strummed chords can sound boxy, the guitar is quite punchy and is richer in sweet mids than the super-compact, 90mm-deep body might suggest. Full-fat bass tones are nearly absent, but sustain is pretty decent for the size too.

Less pleasing is the way your fingers have to crowd into what feels like a space the size of a two pence piece when, say, forming a D chord. The narrow 43mm nut means playability is cramped compared to a full-size guitar.

You get used to it after a while, but playing fingerstyle on the JR2 initially feels about as roomy as trying to breakdance in a broom cupboard. This guitar suits breezy, easy strummed chords far better, which fits its intended purpose.

Yamaha hasn't made the JR to put vintage dreadnoughts to shame. Instead, it's designed to be easy to sling around your neck when you're lugging a five-man tent and a crate of beer through a crowded festival field, and it excels at that kind of caper.

Smaller and lighter than Taylor's GS Mini and Takamine's EG Mini, it's also much cheaper, so if it picks up a few scuffs and dings after being slung in vans, dropped in the mud and accidentally kicked, it's no big deal. Plus, the rugged nylon gigbag it comes with should keep the worst of the damage at bay.

The JR2 is meant to be played, not hung on a wall, and for that Yamaha should be commended. While you're unlikely to fall in love with it for its tone alone, as a tidy little tool for outdoor strumming it's likeable and cheap enough for you not to resent the inevitable compromises that have been made to achieve its small size.

Yes, almost any decent standard-size acoustic will outdo it in terms of both volume and tonal richness, as will premium-grade small guitars from the likes of Martin and Taylor. But if you take the JR2 where space and portability are at a premium, it will shine.