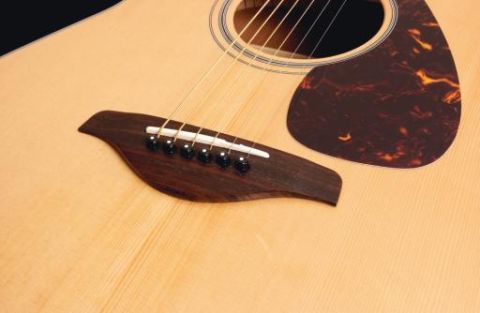 The humble, stripped-down FG700MS has fantastic acoustic character and ticks all of the required boxes with aplomb.

For quite some time now, Yamaha's acoustic guitars have been synonymous with great performance and excellent build quality, with a model to suit most wallets. The Yamaha FG series has been upgraded with design features inherited from the L-Series, so this guitar looks promising.

The FG700MS at £175 is the least expensive model in the series but shares many of the features and proportions that are common across the range.

The 'M' in the model name denotes a matt finish, although in reality there is a slight sheen that is closer to satin.

It's interesting to see Yamaha incorporating this as an option at this level of their acoustic range. The associated tonal benefits of thin finishes have been frequently debated and in recent years many manufacturers have offered this, although often at a premium as a high-end custom feature!

On picking up the FG700MS, we were immediately treated to an inviting thin finish that feels organic and tactile. Indeed, the finish sinks into the grain all over the neck, back and sides of the guitar so it is possible to feel the texture of the wood with fingertips.

This is something that may polarise players but ultimately it's a subjective issue and a gloss version is available should you wish. Internal construction appears sound, with a little glue having seeped out from under one of the braces, which is clearly visible through the soundhole on this particular example, although the overall standard is perfectly acceptable at this price point.

The neck joins the headstock via a scarf joint under the first-and sixth-string tuners, rather than at the second fret as some manufacturers opt for, so the length of the rosewood fingerboard is supported by a continuous section of nato.

Tuners are diecast chrome Grover-a-likes with familiar kidney-shaped buttons. Headstock decoration is genuine mother-of-pearl - a touch of quality at this price.

The guitar's serial number is stamped in black ink on the brace that sits under the 20th fret, through which truss rod access is achieved.

The rosewood bridge is compensated for intonation at the second string and its larger physical size should, in theory, facilitate greater transfer of string vibration to the solid spruce top.

The top itself comprises two sections of spruce joined at the centre point, while the simple monochrome rosette design mirrors the purfling, complemented by the dark tortoiseshell scratchplate.

The FG700MS features black binding on both the body and the neck, where fretwork is neat and uniform. In terms of overall feel, there is an appealing no-frills accessibility that encourages us to put the instrument through its paces.

The thin satin finish allows the instrument to breathe with a breezy natural resonance that promotes bold chordal work and expansive strumming.

There isn't a sonorous, piano-like bass response but there is a focused bottom end, a pleasant string balance, good sustain and a bold, articulate mid-range.

Fingerpicking is rewarded with definition and sparkle, if lacking a little sweetness and warmth as a result. That said, this is a versatile instrument indeed, and the stripped-down nature of the instrument encourages you to dig in and play in a way that more ornate acoustics often don't.