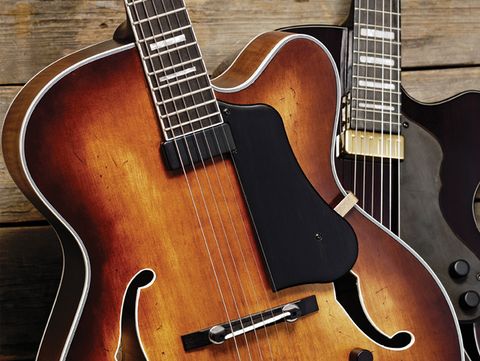 When you're competing with the likes of Epiphone, Peerless and, of course, Hagstrom, you need to make sure that your guitars play every bit as good as they look.

You can see for yourself: Washburn's new J600 is a handsome beast. The guitar's spruce top and maple back and sides have been aged with some light dents and scrapes and a matte finish.

It all adds to some effective eye candy, though strangely, the body and neck binding is gleaming white, not yellowed as you'd expect on a genuine old guitar. Still, that doesn't stop this guitar from looking good.

The finish is rough in places, which adds to the vintage vibe, but we noticed a rough patch on the back of the neck that we could feel when we played. We're not so keen on that.

Washburn has pulled out the stops when it comes to the bolt-on goodies. The guitar's scratchplate, bridge and tailpiece are made from ebony, and the bridge has a compensated saddle slotted into it for better intonation.

The J600's distressed brass hardware fits in the guitar's vintage aesthetic perfectly and we like the rubber-like feel of the Ebonite buttons on the Grover machineheads. They're great if you suffer from sweaty digits while you're tuning at gigs.

The J600's slim neck is a joy to wrap your left mitt around. That's the good news. Unfortunately, on our example model at least, bending the strings feels like you're dragging them across sandpaper.

The frets are tarnished in places and a bit rough in general. We expect a better finish at a much lower price point these days. Granted, jazz guitarists don't generally bend strings, but at £529, the Washburn's playability should at least cover these bases.

The J600 has a floating humbucking pickup standing guard at the end of the fingerboard. Plugging in clean, the pickup does a good job of reproducing the guitar's bright acoustic voice.

That said, the string balance is compromised a bit by a pronounced boom from the bottom end, which stubbornly refuses to back down even when your amp controls are adjusted to compensate.

The J600 doesn't get on with extreme gain but it does produce some great Jack White-a-like filthy blues tones. We love that spitting frying pan vibe that characterises an unpredictable note response.

With a heavier set of strings fitted we reckon this guitar could be a slide monster, too. Even with the cheap feeling strings that come fitted as standard the bottleneck potential is obvious.

The Washburn J600 is a decent-sounding jazz box that just needs a few tweaks to make it great. A fret polish and better quality strings would be a good start.

When you're competing with the likes of Epiphone, Peerless and Hagstrom, you need to make sure that your guitars play every bit as good as they look.