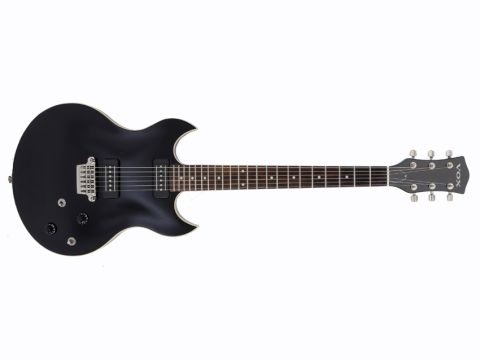 A contender against anything from the big brands under £1,000. Huge tonal versatility from the excellent CoAxe pickups

We last looked at Vox's all-new high-end electrics back in 2008, and we liked what we saw. The Virage SC was a scaled-up single-cutaway, and the DC a downsized ES-335-inspired design, each using a unique approach to semi-hollow construction and round-your-body contouring.

Vox is now broadening the offer in both style and price to three new series - 33, 55 and 77 - alongside updated originals. Just like the critically acclaimed Japanese-made Virage, the new guitars were designed and prototyped in the San Francisco-based G-Rok design shop.

"We develop the guitars in 3D CAD [computer assisted design] and write the CNC machine code right in our facility," explains Rich Lasner, G-Rok's vice president of development. "This ensures that the factory, Indonesian in this instance, will run the same programs and produce a high-quality guitar affordably."

"With the SDC plugged into a Marshall style amp, there's a full yet well-defined tone that can cut through, but without over-shrill treble response."

We've got our hands on the solid-bodied SDC-3 which, along with its single-cutaway cousin the SSC-33, acts as the entry point into the new ranges.

The SDC-33 is certainly unique, combining the Virage's 3D contoured body with thick single-ply binding and a deeply cut inverse heel join. Its elegant physique cloaks its bulk, giving us a max rim depth of 43mm (that's just 3mm thinner than a Stratocaster), before slimming down to 30mm at either horn and 21.5mm at the heel.

The build also ensures maximum comfort, whether sat or stood. You can't tell from the front, but the 3D bodies are 'curved' from endpin to the neck joint so they more or less wrap around your midriff, putting both of your arms/hands in the ideal spot, and eliminating the painful forearm rub that afflicts many a thrashing Les Paul, ES-335 or PRS player: a brilliant design.

The SDC's all mahogany neck feels very 'at home' and familiar. There's a sixties vibe here, with a good solid feel in the palm and smooth finishing on the back of the neck, which with the 22 medium jumbo frets makes it a doddle to play.

"We were going to name the neck shape Fred," jokes Lasner, "but I think calling it a traditional 'C'-shape works fine in this instance!"

Without doubt, the general fit and feel of the SDC is of a very high standard, without a single blemish or finishing flaw. In fact the level of finishing is on a par with that commonly attributed to a higher-end, Japanese-made instrument: good work Indonesia.

Both the SDC and its SSC-33 counterpart share similar electrics and hardware specs with higher-end Vox models, with the company aiming to offer maximum value and tonal quality without compromise, even at a lower price bracket.

"We don't believe that the player on a budget should sacrifice tone, stability or ease of playing because they choose one of our less expensive models," Lasner continues. "You're getting proprietary CoAxe pickups from the top-of-the-range models, our custom designed MaxConnect bridge system and the Super Smooth tuning machines."

The CoAxe pickups were designed by Eric Kirkland in-house at G-Rok. Kirkland began with the work DiMarzio had done creating the original Three-90 pickups for the first Virage guitars.

"We wanted to continue our quest for a multi-sound pickup that was cost efficient to build, yet had very convincing single-coil, P-90 and humbucking sounds that are entirely noise-free," Lasner states. "Using the P-90-style footprint as a starting point, Eric set about developing a two-coil concentric and coaxial pickup using a magnetised central coil, surrounded by a secondary coil outside of the magnetic field."

Lasner goes on to explain that both coils are tapped at different points to create different tonalities, plus you get the benefit of noise-cancelling in each selection. 33-series guitars like this have a master mode selector - two sounds per pickup - while the 55, 77 and Virage II models (reviews coming in due course), have three-way mode switches for each pickup, as seen on the original Virage designs.

Alongside this, the lightweight cast aluminium MaxConnect bridge has been completely custom-designed by Lasner's team. It offers easy height adjustment and the strings slide in under the back edge of the bridge.

Acoustically the SDC rings out with intent and you can really detect added zing emanating from the MaxConnect bridge. We have two different sounds represented by the 33's dual modes: clean and lead.

The clean mode takes on a Fender-like stacked single-coil tone, while the lead mode is slightly narrower sounding than a classic PAF-style humbucker. With the SDC plugged into a loud Marshall-style amp, in clean mode, there's a full yet well-defined tone that can cut through, but without over-shrill treble response.

The overall tonal balance is great for tight rock rhythms and under more gain it truly sings, staying transparent and adding percussive attack to a heavier sound. Imagine a modern SG with noiseless P-90-style pickups - plenty of rich bite coupled with the depth and attack of the mahogany body.

It's clear that, as with the SSC, the SDC will easily satisfy blues-rockers or players with more modern heavy rock tastes. On the other hand, the SDC is marginally narrower and more compact sounding than its relative; it's less gnarly and more polite, if you like.

However, coaxing spirited and bubbling blues-rock tones from the SDC-33 is a breeze and under heavier gain the characterful zing of the MaxConnect bridge shines through and helps deliver a sprightly punch to the note.

So, the 33 Series guitars are the entry point into the 2010 Vox guitar line. The unique styling, build and features mean the SDC has a lot going for it. As well as being extremely well put together, it delivers an impressive range of sounds that'll suit both modern and retro styles, and it's super comfortable to play, too.

The SDC is the tearaway double-cut of the 33 clan, delivering a snappy, classic rock-infused tonal character throughout which is more than happy to rock-out when needed.

In terms of quality and value, all the guitars in Vox's 33 Series stand up to any of the bigger brands even if, at this point in time, they can't match their six-string heritage and reputation.

With guitars as good and original as this, however, who wouldn't want to try something new?