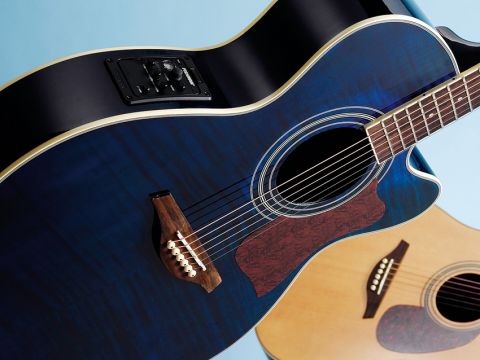 It's fair to say that Vintage is now a major player in the low-end acoustic and electric world. Recent years have seen the company (an in-house line of the UK's John Hornby Skewes & Co) team up with industry heavyweight Trevor Wilkinson on the electric side of things, leading to a marked improvement in the spec of its electric range.

Now Vintage has collaborated with another industry legend in the shape of American acoustic pickup specialist Fishman. JHS took on distribution of Fishman last year and this has led to its preamps and pickups being rolled out across Vintage's re-launched electro-acoustic range, allowing JHS to maintain its advantageous prices and something-for-everyone philosophy.

The VEC350 is fitted with the Aero preamp system and Sonicore under-saddle pickup. The Aero offers a built-in chromatic tuner with LED display and on/off mute button, volume control, a three-band EQ, phase switch and a natty flip-top housing, which grants easy access to the integrated battery compartment.

The Aero occupies minimum space on the upper bout of the guitar, leaving more wood in place. This should, in theory, have less effect on the acoustic tone.

The VEC350 has a grand auditorium-style body, which is derived from Taylor's popular 14-series shape. Its curvy outline appears bigger and more muscular than the flatter looking VEC500 dreadnought; in fact the VEC350 is 11mm wider across the lower bout.

Its max rim depth is 21mm slimmer, aiding right arm reach and playing comfort. The steep slope of the cutaway opens good access past the abalone Vintage emblem 12th fret inlay, making the VEC350 suitable for least bursts, as well as all round strumming and picking.

The VEC350 has a 25.2-inch scale length - longer than a Martin 000, and marginally shorter than an OM or dreadnought. It's very close to the latter, so it feels more long-scale than shorter-scale in terms of string tension (the shorter the scale, the less tension in the strings).

The laminate spruce top is faced with a luxurious looking flame maple veneer that's very easy on the eye, and the laminate mahogany back and sides are equally matched with the dark translucent blue guise of our review model.

The neck is made from nato, a hardwood that has similar properties to mahogany, and has a medium 'C'-shape profile with narrow shoulders. However, towards the third fret, the 'C' morphs into a soft 'V', giving it what could be described as an 'electric' feel, reminiscent of an Epiphone Les Paul profile.

We're always taken aback by the quality of finish on many entry-level guitars and these are no exception. The multi-ply and off-white binding is generally finished to a good standard. Alongside this, the VEC350's die-cast Grover-style chrome tuners perform well, being accurate and stable. There are also no apparent intonation issues with them.

When flat-picked or strummed, the VEC350's mellow response impresses. There's not too much boom or volume from the body, but the warm low-end and comfortable highs mask the want for more acoustic volume. Amplified, the Fishman Aero really comes into its own and the built-in tuner is easy to use when gigging, while the low-profile control knobs are also neat and tidy.

The Sonicore under-saddle pickup seems to complement the VEC350's mellow tonality, delivering a more woody and rich tone than we'd expected. Balancing the EQs on the Aero and maxing the volume remedies the VEC350's lack in acoustic volume, without any unwanted gain or squeal.

Overall, the Aero preamp and Sonicore under-saddle pickup enabled us to harness the best qualities of the VEC350's acoustic response and makes for a very impressive and giggable electro-acoustic.

Vintage has a noted reputation for delivering entry-level acoustics with impressive build quality and specification - add in the Fishman electronics and they look even more attractive than before. The VEC350 is more than adequate for live work and would sound particularly sweet as a budget recording acoustic.