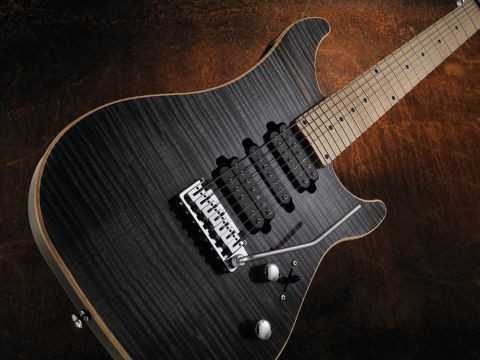 If you're in the market for a high-end seven-string that doesn't necessarily scream 'metal' right in your face, this is a serious contender.

The first modern production seven-string solidbody electric was the Ibanez Universe, introduced in 1990, and its instigator Steve Vai used the extra string to fuel his creativity to produce the classic Passion And Warfare album that same year.

Ibanez doesn't own the concept, of course, and Vigier's first production seven-string, the still-available Supra, was introduced in 2010. Now the French company has revisited the concept and come ups with this new version.

"The killswitch opens the door to some crazy effects, especially when using the low B."

The headline refinement to the spec includes adding the book-matched flamed maple cap to the solid alder body, and we must admit to quite liking the slight imperfections to the wood beneath the understated black diamond finish. Natural scraped-back binding is always a sign of a classy instrument, and the stringing itself includes the addition of a low B to the customary E to E set.

The DiMarzio Blaze pickups are designed around a ceramic magnet, specifically for seven-string use, and are controlled by a master volume, master tone and five-way lever pickup selector. There's also a bijou killswitch, squirreled away between the five-way lever switch and volume pot.

Initially conceived to meet Ron Thal's requirements when designing the latter's signature Bfoot model, he asked for it to be sited as close to his right hand as possible rather than away on the upper horn. The guitarist also agreed with Patrice Vigier's wish that the switch itself be made sleek and unobtrusive, rather than resorting to the more obvious toggle switch, and the button here, which rests almost flush to the body, measures a mere 5mm in diameter.

The fingerboard runs from 49mm at the Teflon nut to 67mm at the 24th fret, and so playable are all Vigier necks that you don't really notice this additional width after a few minutes' playing. The maple, dried for three years before use, is silky smooth and, if you prefer, the option of a rosewood board is also available at no extra cost.

A great advantage of a seven-string guitar is the way its low string can give a tight rather than overly flappy sound, and this is something the Excalibur does excellently. The overall tone is huge, leaning more towards the majestically downtuned roar of Mastodon than the more processed classic Vai tone, but even when played cleanly, the sustain, warmth and intonation is spot on.

The 'in-between' mixed pickup tones are usable too, and can provide a good tonal contrast with the humbuckers. However, we do hear a significant drop in output when we switch to the settings that employ the central single-coil and, as the pickups are screwed directly into the body wood without springs, they can't be readily height-adjusted.

The killswitch opens the door to some crazy effects, especially when using the low B. The Morse Code, the Broken Lead and the Mick Ronson all sound good, but a cool Thal trick is to repeatedly rub the back of your thumbnail over the switch as fast as you can. While doing this, fret single notes to produce a bizarre trill-like gurgling effect - cool.

Vigier is a brand that more players need to be aware of and experience, as every single one we've tried over the years has been of the highest order.

Naturally, a seven-string guitar will have a far more limited appeal but as such instruments go this is certainly among the best we've played and is, in our opinion, fairly priced. With this standard of construction, the gorgeous neck and organic tones, you really should tread the stairway to this seven.