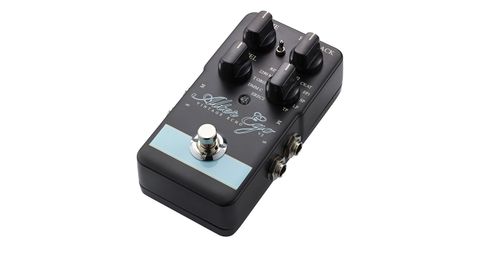 While it sounds fantastic, the T2's modulated 'verbs could be a little over the top even for ambient fans.

Not content with the success of its Hall Of Fame Reverb, back in 2012, TC collaborated with Pro Guitar Shop on the Trinity Reverb, which added two exclusive ethereal sounds - the T2 reverb pedals is the sequel, and packs eight ambient reverbs.

As well as the usual controls, a pre-decay switch determines how long it takes for the 'verb to kick in, while a Roman numeral-encoded mode selector chooses between eight new PGS-designed voices, plus two ethereal settings from the original Trinity.

A TonePrint slot lets you load a pro player-designed 'verb, or make your own using TC's TonePrint Editor. The T2's 10 sounds take you on a voyage from heavily flanged 'verb to organ-like wobble and painfully slow pitch-bending, but our faves are the cathedral settings, which beg for Buckley-style arpeggios, and the harmonic-laden ethereal 1 mode for icy soundscapes.

Brace yourself, though: even 12 o'clock on the decay dial will be a bit much if you wish to stay on planet earth. With a bevy of hi-fi, colossal reverbs, the T2 will be right up the street of ambient and post-rock players.

While the lack of pitch-shifted settings and sheer intensity of the modulation could have some guitarists looking towards more versatile ambient 'verbs, the T2's TonePrint slot means you can always keep a more conservative reverb in your back pocket.