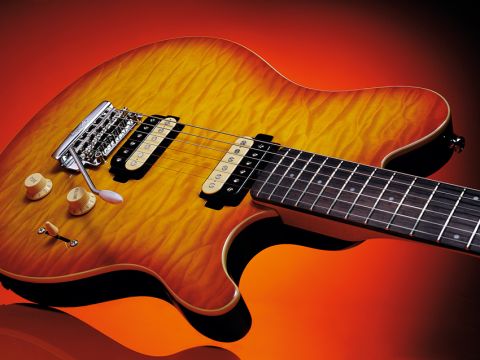 Offering a greater palette of sounds than the costlier AX40, plus a more user-friendly vibrato, this is a great choice for cost-conscious players looking for a slice of Music Man action.

Debuting during 2009 and built in Indonesia in the Cort factory, the Sterling range has brought Music Man design ideas to a much more affordable price level. The new AX30 we have here replaces the existing AX20, retaining the same specification but substituting the latter's fixed bridge with a twin-pivot vibrato unit.

Unlike the 20's machineheads, these are non-locking, but still boast pearl plastic buttons. A neatly cut nut leads onto a broad-radius rosewood fingerboard featuring 22 smoothly finished frets, with easy playability enhanced by the maple neck's gently asymmetrical profile. Slightly off-centre shaping leaves more wood on the bass side - this finger friendly profile was first felt on the original EVH model.

Gloss lacquer contrasts the oiled finish of a fully fledged USA Music Man neck, but the wheel-type truss-rod adjuster is retained, likewise the five-screw anchorage to the body, complete with curvy neckplate on a similarly ergonomically shaped heel block.

The white vibrato arm tip clashes with the other cream plastics which may annoy you visually, or it may not. The supplied set-up tilts the bridgeplate back onto the body face, allowing only down bends, but setting it up to float is easily accomplished with a quick loosening of the rear cavity's springs and retuning to suit. The action is both positive and responsive, with impressively consistent pitch return.

The twin humbuckers are direct-mounted and boast zebra bobbins equipped with Alnico V magnets. Like the earlier AX20, the AX30 is equipped with master volume and tone plus a five-position selector switch. The latter provides either or both humbuckers in series, along with the options of the neck position in parallel mode, or the combined inner coils of each pickup.

The onboard metalwork contributes to a zingy acoustic resonance that carries over to the plugged-in performance. The humbuckers emphasise the AX30's rock-orientated intentions and deliver a blend of punch and presence that's tailor-made for gritty rhythm work, bluesy bending, gain-laden lead lines and soaring solos.

A Fender-ish clean-cut edge adds some airy clarity to the three main pickup positions, but this character becomes more apparent on the two in-between options, especially in a cleaner aural environment, with one choice taking on a nasal chime while the other's snappy attack suits country picking. The versatility is extended via the gradual changes provided by smoothly progressive volume and tone pots.

Construction and component quality put this Axis imitation above other similarly styled lookalikes, including the old OLP equivalent. The price is also higher, but performance reflects the better build standard and criticisms are few and minor.

The Sterling AX30 impressively echoes the real thing without causing too many wallet-related worries, making it a useful addition to Music Man's already successful second string.