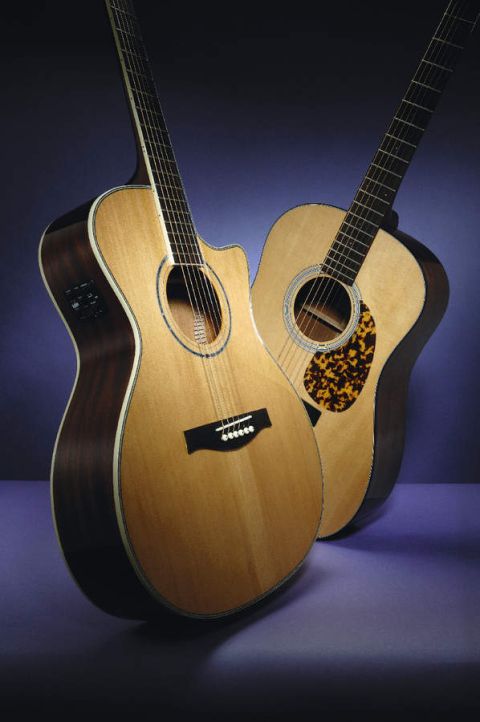 A welcome tonic to the usual entry-level identikit strum-boxes.

A balanced XLR out: great at this price.

The dismantling of the Berlin Wall in 1989 wasn't just a social victory - it was also a starting pistol for the wheels of industry.

By the following year, the German designer Toni Goetz and the Czech luthier Frantisek Furch had met, bonded over a shared admiration for the work of Slovakian design legend John Dopyera, agreed on the traditionalist ethos of their fledgling business and launched the original Stanford Artist series from a workshop in the Czech Republic.

You won't find many people with a bad word to say about the models that have arrived in the UK since the early-nineties, but if there is a factor that has kept Stanford Guitars as cult heroes rather than ubiquitous overachievers, it could be that the product line has always been quite expensive, with the Artist series spanning from £800 to a cool £1,500.

But no longer: in 2007, out of nowhere and almost simultaneously, Stanford unveiled two new Chinese-made lines - the mid-price Performer and entry-level Monterey - meaning that this intriguing brand is suddenly vying for the wallet of the everyday punter.

The Monterey series has the entry-level market squarely in its sights. Naturally, there have been cuts to keep the models within the magic £200-£300 bracket - not least that production takes place in a separate Chinese factory from the Performer series - but UK distributor Acoustica insists this new range retains the form-and-function ethos.

As a cutaway grand concert, the MSGC100 certainly makes a statement in a drab market, although this is apparently more down to black-and-white economics than design whimsy (Stanford's smaller-bodied guitars sell in greater quantities than its dreadnoughts in Europe).

The soundboard is, as we'd hoped, an attractive slice of solid Canadian cedar while the body timbers are laminate mahogany. They look attractive enough but suggest this model is less of an investment, more of a stopgap.

Still, the build quality is fastidious and there are flashes of genuine quality - the bone nut, for example, the finish of the fretwire, and the presence of B-Band's trusted A3T preamp.

Locking to the knee and unlocking the top frets with a generous cutaway, this shape would suit a smaller songwriter to perfection, while the familiar scale and spacing mean that the MSGC100 is a belter for sliding fingerpicked arpeggios, and forgiving when it comes to barres thanks to the profile and action.

It's slim, but Stanford hasn't made the MSGC100 emaciated, with the 105mm depth meaning there's sufficient air in the box for decent 'pocket rocket' output.

In terms of tone, there's a willing response and no black spots, with a firm bottom end, a zingy mid-range, and a sparkling top end that benefits from the fast response of cedar.

If you like the raw tone of an acoustic then it's always good to see B-Band's A3T in the bout. There are fancier pickup systems on the market, of course, but for conveying tone with a minimum of fuss and frills - and if you can survive without a notch filter - this is hard to fault.

In this instance we were impressed, as the MSGC100's impressive tone made it safely through the amp, underlining our thoughts that this guitar would excel in pub and club gigs, even if it's not distinguished enough for the studio.