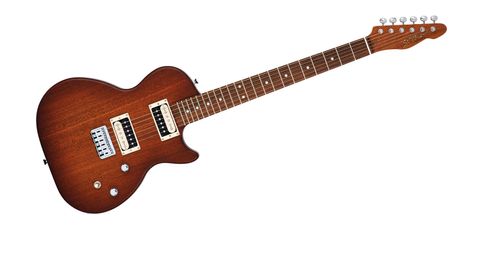 A neat hybrid design that's very tidily made with some good sounds. A gigging workhorse.

We last caught up with St Blues back in 2009, when we looked at the Mississippi Bluesmaster and Bluesmaster IV. The brand has its roots in the Memphis musical retail scene and has quite a convoluted history.

After its heyday in the latter half of the 80s it disappeared until 2006, when it retuned with a small range of Korean-made instruments - hence our previous reviews - and a high-end USA Workshop Series line.

That changed again in 2011 when it was decided to make 'em only in Memphis, just like the old days. In January 2013, the affordable USA 'Juke Joint' line was created - on review here.

The Mississippi Bluesmaster is the more Gibson-like version of the standard Fender- scale Bluesmaster. The original Bluesmaster design, which dates back to the 70s and is credited to founders Tom Keckler and Charlie Lawing, was the first St Blues guitar and remains its 'classic'.

While the current Workshop Series are more boutique-priced, with USA parts such as Lollar pickups, the Juke Joint model here has a satin finish and non-USA pickups, with hardware from Kent Armstrong and Wilkinson.

With its uncontoured 'slab' body, there's something wonderfully uncultured about this design. It has a standard 45mm thick body and large-radius Strat-like edges.

The Bluesmaster looks like a single-cut Les Paul Junior that's been compressed, squashing and flattening the base of its body.

It has a seemingly standard Fender-like bolt-on neck join, too - the heel platform of the body is left angular; it's a little too sharp, but the neck joint feels very rigid.

Similar class is applied to the neck, and it has that Fender Tele-inspired headstock with an open-hole, easy-to-tweak truss rod adjustment behind the nut and quite a deep but not overly-big rounded C profile that gets pleasantly chunky further up the neck.

Dimensionally, that equates to 22mm at the first fret and 22.4mm at the 12th. Fretting is very tidy, a medium wire with well rounded ends - only the Bluesmaster's fingerboard edges could do with a little more rounding to reflect its old-school 'vintage' vibe.

The satin finishing is done well on both body and neck, the Sweet Tea 'Burst of the Bluesmaster really enhances the flecked grain of its mahogany body, with the neck left a more natural lighter hue. No doubt the finish will burnish with use, but it does look a little 'entry-level' on this slab body.

We're unsure of the origin of the Bluesmaster's bridge, but it's a walled hard-tail Strat-like design with chunky, block-style saddles and strings that anchor through the body. Nice.

Both volume and tone controls have pull/push switches to voice the individual coil-splits on the humbuckers. All very logical.

The Bluesmaster looks smaller than it feels, and with its pleasantly chunky neck it's a comfy player and nicely weighted. The all-mahogany construction certainly gives a rounder high-end than you'd hear from a more standard Tele-like construction, but that's the point.

Its sounds range from bar-room brawling rhythm and blues through hot Texas - that's never too sharp edged - into juicier classic/roots rock. It's a no-brainer for blues, bump 'n' grind rock and even the dirtier edges of country twang via the cleaner-sounding coil-splits: a Gibbo for the Tele player, or a bit of bolt-on twang for a Les Paul owner? It sits in the middle ground but not on the fence.

If you like your posh guitars, this St Blues isn't for you. It's simply a well made, well - but not exceptionally - priced USA instrument that will appeal to the working player in all of us.

Nonetheless, it's a very likeable guitar that you might prefer, for example, to a Fender American Standard Tele HH, PRS S2 Mira or a 2015 Gibson Les Paul Studio.