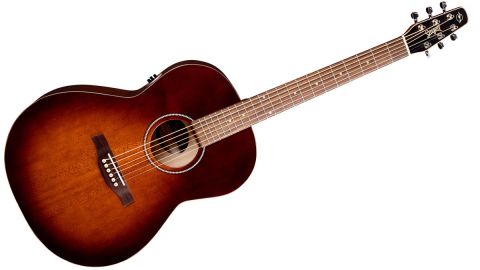 If Seagull isn't on your to-try list, make sure you add it.

For 2016, Godin's Seagull range is going through a brand refresh.

Along with new models - and they're all electros this year - there's a new colour (Burnt Umber, as seen here), a new under-saddle pickup, new tuners and a bolder logo with a different forward-looking seagull, although the Entourage Folk, a new shape to this range, has a transitional spec.

The Folk has black binding and just the 'burst to the top. Detailing is crisp, inside and out, and the satin finish is clearly very thin. Decoration is minimal, just a slightly different herringbone soundhole motif and simple dot inlays on both 'boards.

The electronics have been upgraded, too, for this year with a new EPM-designed under-saddle pickup, while the small Q1T side-mounted preamp offers a tuner plus volume, and treble and bass controls, sadly without centre detents.

Nut width measures 43.62mm with string spacing at the bridge at 55mm. The Folk's neck is less tapered depth-wise (21mm at the 1st fret, 23.5mm at the 9th) than the recently-released S6 and has subtly fuller shoulders - enough to make you prefer one over the other.

Fretting from a small-ish gauge wire is tidy and smooth-topped, plus the fingerboard edges are slightly rounded - something rarely found at this price point. The preamps' tuner displays the note and has flat/ sharp/in-tune indication; it's fast and accurate.

What's special about the Folk is quite a unique voice, the combination of those laminated wild cherry back and sides, which, says Godin, has "a sound that lands somewhere betweenthe mellow tone of a mahogany guitar and the bright sound of maple", with their cedar tops plus a robust but pretty light build.

It feels, and sounds, obviously, new and a little tight but should hopefully fill out and mellow a little with playing. As is, there's quite a strident tonality to the Folk and, as we've noted before, a hint of acoustic archtop that perhaps suits rootsier and bluesier styles more than pristine, crystalline modern voicings.

Amplified, the EPM system is nicely voiced. The bass EQ is quite strong, so use with care, and a little treble reduction tames the new-string brittleness. Yes, there's a slight piezo character, but it's far from thin and quacky, although it's especially apparent on the Folk, where we'd be tempted to blend in a magnetic soundhole pickup to maximise that older tonality.

Sound-wise, too, there's plenty of old-style charm here, especially if you're unmoved by the overly modern, crystalline sound of numerous electros, especially amp'd.

It's a great picker for bluesier, jazzier styles and a fine bottleneck guitar, too. As ever, you might hear different things, but there's no doubting the consistency and quality of these guitars.