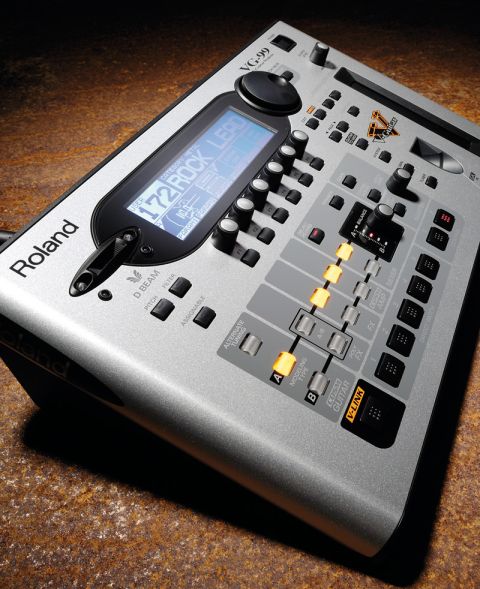 Roland was first on the block with a guitar modelling processor, introducing their VG-8 'V-Guitar' in the mid nineties, followed by the more affordable VG-88 in 2001.

Now we have the next generation, the VG-99, which promises to take the theme to a whole new level with more powerful processing, new expressive performance controls
and a USB computer connection for direct recording.

What you get onboard are both modelled guitars and modelled amps in a dual modelling engine with two signal paths that can be switched or combined in various blends, allowing you to be playing two virtual guitars through two virtual amps... at the same time.

There are a wide range of modelled guitars (and related instruments), pickup types, amps, speakers and mic'ing options to choose from and when you factor in the onboard effects (equivalent to two BOSS GT Pros) it's easy to see that a world of sounds awaits to be exploited.

What's more, the VG-99 also features guitar-to-MIDI conversion so you can add external synth sounds to the mix. Er, phew!

This generation of the V-Guitar processing comes in the form of a desktop unit that can alternatively be rackmounted or placed on a stand. Previous models were floor-based but you can add foot control to the VG-99 by plugging in Roland's FC-300 to add switching and a couple of pedal treadles.

The VG-99 requires a Roland GK series divided pickup (£105) which you have to buy separately, and can be fitted to a guitar easily without permanent alterations.

The VG-99 interface is laid out logically enough with easy access to all parameters and a display that clearly lets you see all the vital information. A far better option, however, is to connect the unit up to a computer and do all the editing there - a graphical software editor is supplied and the larger coloured screen with various pop-up menus makes the whole process more streamlined.

With so much editing potential it takes a while to get used to what the VG-99 is capable of, but a trawl through the 200 factory presets puts you straight on that score. After setting up the response to our GK-3-equipped Strat and setting the VG-99 output
parameters for the amp in use, (you can set it to match combos, stacks or mixing desk inputs), a voyage through the presets reveals not only plenty of traditional electric guitar/amp combinations and acoustic guitar emulations but altered tunings and synth sounds.

There are also other stringed instruments such as banjos and sitars plus chances to combine the various elements to create weird and wonderful new hybrids - all with no latency delay or apparent glitches as the GK3/VG-99 combination plays just like a conventional guitar.

The hybrid sounds are facilitated by the fact that two signal paths can be active at the
same time. These can be switched between by the VG-99 buttons/knobs, connected foot controllers or according to your picking dynamics - maybe picking softly for an acoustic guitar sound and digging in harder for an electric sound.

It is also possible to split the two signal paths between strings for, say, a bass sound on the bottom two strings and standard guitar on the others.

If it's not a blended sound that you want, the switching would allow you to play a Telecaster through a Fender amp for rhythm chords while switching to a Les Paul/Marshall stack combination for solos.

The practicality of the switching guitars concept comes more into focus when you can instantly switch from electric sound to acoustic, from six-string to 12-string or from one tuning to another. That ability to change user-programmable tunings at the flick of a switch is a massive asset - you could drop down a fourth for some instant baritone,
switch from standard tuning to open E for bottleneck, and just how quickly could you physically tune a real 12-string to DADGAD?

Of course, none of this would be of much use if the tones didn't cut it but Roland's COSM sounds are up there with the best in interpreting the sound of the real thing for the circumstances at hand.

The acoustic guitars are not particularly convincing in isolation but would certainly function as a pragmatic substitute for the real thing at a gig.

The electrics are generally much closer to the mark. If you have, say, a real Rickenbacker 12-string coupled with a vintage Fender amp then the VG-99's take on that particular combination won't have you consigning them to the attic. It does mean, however, that you won't have to haul that rig to a gig for the couple of songs it may be used on.

If you don't have that 12-string but need that sound to sit in the mix of a recorded track, chances are it would fool most listeners, if not Roger McGuinn.

In terms of live work, while most of us would shy away from taking a computer loaded with amp sims onstage as our main sound source, the VG-99 is an altogether more robust proposition. With a guitar with a solidly-mounted divided pickup and an FC-300 underfoot the system feels comfortably reliable.

Other aspects presumably included for live expression are fun but more dubious in practical terms. The Ribbon Controller and D BEAM are there to add an extra dimension to your playing - rub a finger along one or wave your hand over the other to induce, say, a wild vibrato.

Are Roland forgetting that we guitarists usually have our hands full? Perhaps we could wave the guitar neck about and there's always another appendage that could bring a new meaning to the term wang bar... but let's not go there!

To buy or not to buy?

Okay, there are other modelling guitars and there are other amp modellers but the unique thing about the VG-99 is that it pulls both strands together in one package and takes them further. What you get is undoubtedly a step forward in the evolution of the electric guitar as a whole.

As a self-contained tool to create new tones and expand the vocabulary of the instrument the VG-99 is unsurpassed, rivalled only by the Gibson HD.6X Pro digital guitar, which is also capable of venturing into similarly uncharted (yet different) sonic territory but only when linked up to a range of external processing.

Sonic exploration, however, is arguably the preserve of the few rather than the many who are completely comfortable with the guitar/amp/effects vernacular established over the last six decades. The VG-99, though, is capable of approximating just about any of those sounds.

The VG-99 is a practical tool for working guitarists. It provides a one-stop solution to anyone who wants an expansive range of sounds for recording from just one guitar or
who has to cover a wide range of musical styles and/or tunings in a single gig - provided, of course, that they can justify the outlay of £1,200 or so needed for the extra pickup, VG-99 and FC-300.