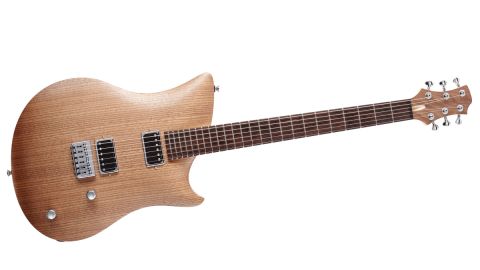 We'll be very interested to watch Relish's progress. Definitely worth a try.

It's sometimes easy to forget that  not everyone wants to play a guitar designed in the 50s or 60s.

But the outcome for those intrepid designers - and over the years there have been many - who dares to come up with a new recipe for the electric is, historically, failure. So, it's with some trepidation that we welcome Relish: the modernist vision of a carpenter-cum-industrial designer and marketing/sales specialist.

Jane is the company's original vision. It caught our eye at recent trade shows and  in the flesh is no less attention-grabbing, despite its eye-watering price for which you could buy a fine example of electric luthiery from all the world's top brands.

It uses a 650mm (25.59-inch) scale length, the classical guitar standard and, of course, just 2mm longer than the classic Fender scale of 648mm. The neck is a Fender-like bolt-ons, albeit with a small three-a-side headstock that, perhaps surprisingly, doesn't offer completely straight string pull over the nut, like PRS or Music Man, for example.

With an intention not to use tropical hardwoods in its designs, Relish has nonetheless chosen a very rosewood-looking 254mm (10-inch) radius'd fingerboard that is actually a 'woven' bamboo - a first for us.

Frets are stainless steel with notched tangs that sit over a thin edge binding - very tidy, very modern and impeccably crafted. The nuts are graphite and beautifully shaped: a high level of detail is evident everywhere and there's not a hair out of place.

There is a Relish logo on Jane's headstock facing that appears to be stamped, but from any distance you can't see it.

The original vision of Jane features an aluminium core 'frame' that's seemingly machined from one piece of 20mm-thick stock. However, most of it is cutaway, leaving a thin 'side' that's approximately 8mm thick, and a central spine that's 60mm wide from bridge to tail, and the neck joint platform; under the pickups, it thins to half of that width. It's this frame that connects the neck to the bridge, creating the sound and vibrational platform.

The structure is sealed, top and back, with pressed seven-ply veneers - the five central layers are ash, while the outer and inside facings here are walnut.

The back flips off; it's held in place with nine small magnets, a no-screw zone, and allows you to not only see inside, but to swap out pickups  via the RF connectors (Relish offers other options and is currently working with Bare Knuckle) in a matter of minutes without the need for a soldering iron and without even slackening the strings. The downside is that you are limited to single conductors, which means that you can't coil-split.

Further modernism from Relish comes in the form of touch-switches for the pickup on/off selection, which illuminate when they are on. These switches require a special PCB, components and a battery - a standard pickup switch is a no-cost option if you'd prefer.

If you're expecting a super-bright piercing voice from Jane with her aluminium core, then think again. A quick unplugged strum and we hear a woody, semi-like voice that's rather surprising. Combine that with a beautiful even and long sustain, and it really isn't what we had expected. Mary is a more conventional gal. Again, the sustain is noticeable, but there's less 'wood' and a zingier response.

Strapped on, we find Jane to feel really comfortable. The neck plays really nicely and is smooth and quite full-depthed in the upper positions, precision- like rather than vintage 'mojo'.

The supplied pickups are certainly in  the hotter realm. Jane's high-end is a little muted, especially with volume reduction.

Jane can sound a bit too honky with lighter gains, but really big and beefy with a little more push.

We pulled out a 2016 PRS McCarty some way through our sound-test and that reminds us of a great-sounding 'standard' guitar that's clearer, more 'all-round' with its vintage-y voice and highly usable coil- splits. 'Game over,' we think. Then we plug Jane back in and think, 'Oh, maybe not!'

The Relish Jane is a beautiful, considered design with a highly endearing voice and superb playability, intonation and character.

Obviously, Jane's price ticket is prohibitive, and while the ability to swap out pickups very easily is attractive, the lack of coil-splits or combined humbucker/single-coil voices could be limiting for many players.