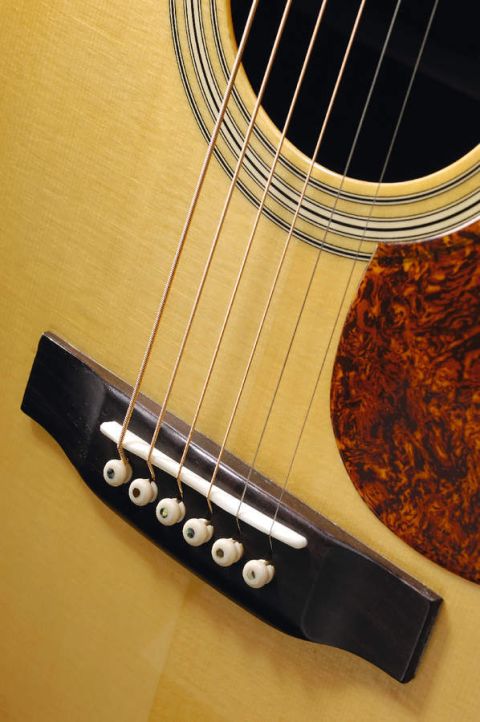 A dark and interesting tone in a bruising package.

The RD27's rosewood bridge adds to its classy, understated looks.

The headstock is finished off with vintage-style butterbean-button tuners.

The AXL Corporation pulled off a canny move in 2007. Deciding that the Johnson brand it had exported from China since 1993 was being put at a disadvantage by its name, and noticing that Recording King - previously associated with the Gibson archtops of the 1930s - was out of copyright, the company put forward a reported $250,000 for rights to the name!

The upshot is that all models known as Johnson will henceforth be re-badged Recording King.

By all accounts, it's a move that has already sparked a huge response among US dealers, but as Guitarist took delivery of the 'new' Carolina RD-27 acoustic, we wanted to know if all this goes deeper than the logo on the headstock.

For now, though, the Recording King range simply picks up where the Johnson regime left off. We still have Series I and II ('I' denoting cheaper instruments with laminate bodies, 'II' offering superior solid timbers), plus the choice of either a rosewood or mahogany back and sides, in either a '000' or dreadnought format.

When Guitarist tested a Series I Johnson Carolina dread' last year, we were impressed, save for a slight lack of character that you might expect from laminates. Will the Series II RD-27 be better?

AXL got into the Chinese market earlier than most, snapping up a dedicated factory and a fastidious workforce, while closer to home, they've attracted USA talent like Greg Rich (ex-Gibson, and principally responsible for acoustic design) and Scott Zimmermann (ex-Fender, and charged with quality control).

Doubtless, this explains why the RD-27 is so successful in its bid to convey pre-war 1930s authenticity, while this specific model also feels a little tidier than some Johnsons we've seen. The new name, it seems, has encouraged the (already excellent) Tianting-based production line to raise its game.

In terms of spec and styling, the new Recording King Carolina RD-27 is the old Johnson Carolina JD-27 with a different logo on the headstock. There's little visual revolution in the combination of a solid Englemann spruce top and solid rosewood body, contoured into a Martin-esque square-shoulder shape, and backed by a forward-X bracing pattern.

But it works so beautifully together, and is backed by such tasty trimmings - including mother-of-pearl along the rosewood board and on the headstock, butterbean tuners, vintage bevelled pickguard and diamond volute on the one-piece neck - that it catches the eye. Less is definitely more.

At least, until you pick it up. The physical dimensions of the RD-27 are hefty in every direction, with a typical dread body depth, a yawning expanse of soundboard and a neck whose chunky profile, we feel, lends itself brilliantly to flatpicking but makes barres a little punishing.

We love the old-school chunkiness, but singer-songwriters might want to check out the 000, while technicians might want to wait and see if AXL makes good on its promise to release a cutaway version.

The deep body offers booming projection. As you'd hope from rosewood, there's real warmth and resonance in the low register that's particularly effective in dropped folk tunings, and it's complemented by a spruce-flavoured snap in the highs and a deliciously mellow mid-range, adding up to a voice that feels idiosyncratic but adaptable to many styles.

We can't wait to see where the Recording King range goes next. For now, this strong bang-for-buck instrument offers a tantalising hint at the brand's potential, matching keen pricing with good build and features.