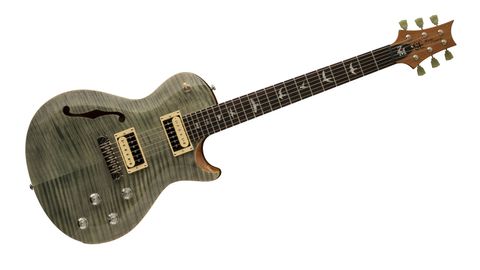 If he wasn't touring the world and helping to sell millions of records, Zach Myers might have a career as a guitar designer.

You can't take more than six million sales away from Shinedown, whether or not the US rock troupe, powered by Zach Myers' guitar, float your boat. A PRS signature artist since the launch of his first SE model in 2011, Myers opts for the Singlecut as his axe of choice - like the majority of SE signature players.

While his first signature was a solidbody with three humbuckers, this new version is a semi-hollow with twin humbuckers - PRS tells us it's the highest-demand SE since it introduced the classic Custom to the Korean-made range in 2005.

Myers' latest isn't the first semi-hollow SE - the double-cut Custom Semi-Hollow takes that award - but it is the first semi-hollow PRS Singlecut, period. The expensive USA Singlecut Hollowbody II (that'll cost you around £3,500) is, apart from a block that connects the top to the back directly under the bridge, completely hollow.

A solid two-piece centre-joined mahogany back is routed out, leaving the bass-side pretty hollow - including the area behind the bridge. The top is solid maple with a bevelled edge that simulates the USA PRS's violin-like contouring.

It's faced with a flame maple veneer, giving some PRS-style bling, while the natural edge of the maple is stained and merges with the light brown of the mahogany. The Trampas Green stain on the top is a little misnamed: it's closer to a faded stonewash denim - more blue-green.

Another neat change is the satin neck back on the chunky but not over-big wide fat profile. Myers likes to sand his neck finishes; here, it's done for us, but a light rub with a fine wire wool or sanding pad makes it feel smoother still.

Then we get the old-style bird inlays, well-fitted frets and a setup that's slinky - although we did up the string gauge to 0.011s, which work well on this slightly-shorter- than-a-Gibson, 622mm (24.5- inch) scale. Heavier strings are catered for with Myers' favourite bridge, the adjustable PRS Stoptail. It makes for an attractive well-priced package, that also includes a durable PRS gigbag.

Whether or not you want to emulate Shinedown, this is one superb-sounding guitar. Okay, the SE 245 humbuckers don't have the breathy edge of, for example, the USA 57/08 'buckers, but from cleanish, bluesier styles through indie jangle to aggressive modern metal, there's little it can't handle. And it's highly feedback-resistant, unless you want to lean into your amp and evoke some.

The individual pickup controls are laid out differently from a Gibson, but they're easy to get to grips with, and the shoulder-placed pickup selector toggle is positioned perfectly - turn off the neck pickup and you have an instant kill switch.