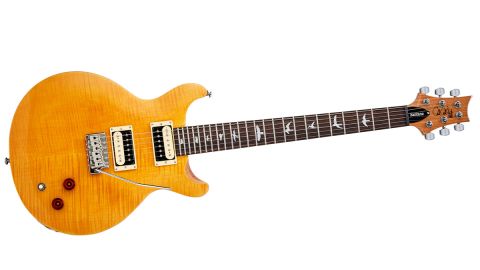 A good acoustically voiced instrument that is not only a serious 'student' guitars but also has plenty of appeal for the more seasoned player who is on a budget.

While PRS Guitars is coming  to the end of its 31st year of producing industry-defining, top-notch production guitars, the SE ('Student Edition') range is only half that age, originally appearing after much deliberation in 2001.

Now, with 2017 around the corner, PRS has done a bit of a refresh with, for  the first time, a Paul Reed Smith signature headstock logo over a vastly reduced SE motif, and various updates that make them, on paper at least, better than ever. Let's start at the beginning...

Back in 2001, the first SE was a Santana signature, a rather dowdy-looking slab-body electric, more in the vein of a Les Paul Special than the company's flagship Custom. It was swiftly blinged up for the next version (that appeared in 2002) and from then on the SEs took flight.

In the flesh, the new headstock décor does look classier. The black signature script is in strong contrast to the unfaced headstock, even though that black plastic truss rod cover still looks over-large.

With an all-over gloss natural finish (aside from the yellow-stained top), you can clearly see how the construction differs from the USA model. The neck is one-piece and is very clearly quarter-sawn, but the body appears to be three pieces with clean but off-centre joins, while the 'bevelled' maple top (again, three-piece with off-centre joins) is faced with a subtly flamed veneer, far less figured than you'd see on any USA model.

The glossed finish does appear thicker than the USA coating, too, but if you like your guitars box-fresh and shiny, you can't fault it. Fretwire is a little wider but flatter than the standard USA gauge, yet extremely well installed and polished to a slippery mirror sheen.

The 'old-school' solid bird inlays - so much a part of the PRS recipe - actually look quite vintage-like in their dark pearloid, and that final, ahem, 'bird' in front of the top fret indicates a full 24-fret complement (like the USA model), not the 22 of the previous SE Santana models. And along with its different shape, the Santana uses the shortest PRS scale of 622mm (24.5 inches) - as opposed to the main 635mm (25-inch) scale - again, just like the USA Santana model.

Another change to this new Santana is  its pickups, which swap from the good- sounding, if slightly generic, 245 'buckers to open zebra-coiled SE Santana pickups (Korean-made replicas of those used on the USA guitar). These are controlled by a simple three-way toggle with closely placed volume and tone with dark amber speed knobs. The triangular rear cavity apes the original.

Inside, we see a treble bleed cap on the volume and notice that - although there's no pull/push switch on the tone to activate any coil splits - the pickups have four conductors, so if you wanted that feature it'd be an easy enough aftermarket mod.

While we're round the back, the vibrato cavity has a coverplate (the USA model doesn't) that isn't recessed but has a single open hole for string access. The unchamfered dark grey painted vibrato block appears to be steel and it's set as standard with four springs. Tuners and straps buttons are more generic than the PRS's USA spec, but at less than a quarter of the price of the USA piece, do we care? Like all SEs, of course, it comes with a very rugged gigbag.

The Santana has a slight neck pull strapped on, but it is far from unbalanced and feels a little compact. The unplugged response of the Santana is very similar to the recently-reviewed Custom and the neck feels subtly, but noticeably, fatter in the hand.

The Santana's voice is different from the Custom right from  the off with the bridge pickup hitting our amp hard. Switching to a dirtier amp voice, there's plenty of Santana-esque mid-focus, a very sight 'cocked wah' tonality that sounds fat and fruity.

It's less of a favourite for cleaner voices, lacking a little fluidity, whereas both the McCarty and to a lesser extent the SE Custom sound very creamy and more musical. In a more gained environment, though, like we said, there's a lot to like about the vibe, feel and sound of this one.

The Santana certainly has its own vibe, and for fruitier, gained sounds it has a strong voice, although coil-splits would be a welcome addition and would definitely increase your options.

This guitar is also a great platform for those of us who like to add our  own DIY mods: from simple coil-split additions or more fundamental pickup swaps or tuner upgrades, there is considerable potential.