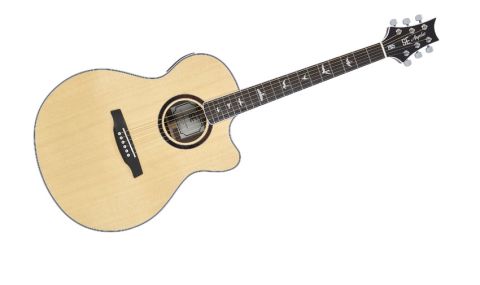 A fine modern electro that's a great place for a PRS player to start their acoustic search.

We last caught up with a PRS Angelus acoustic back in 2010. Since then, quite a lot has changed, not least in the specification and range of the USA-made guitars and, as with the electrics, we now have a Korean-made SE version, available in two levels: Standard, and Custom (as here).

Both are also available acoustic or electro, so our Custom electro on review tops this mini-range and should, on the street, easily nudge in under £1,000. Now that's not cheap, but it's an awful lot less than the USA models, which, with their onboard pickup system, kick off around £4,500.

Shape-wise, the SE Angelus is seemingly identical to the USA Angelus: a 394mm-wide (15.5-inch) guitar that sits between Taylor's grand concert and grand auditorium sizes and Martin's 000/OM and dreadnought, with a bit of mini-jumbo thrown in for good measure.

Like PRS's electric SEs, this one is no slouch in the quality and detail departments. Yes, it has that slightly over-shiny Far Eastern finish that almost makes the body and neck feel too perfect, but the top is close-grained Sitka spruce, the back is solid rosewood and the sides laminate rosewood - a construction style that's been used by Takamine for as long as we can recall.

Figuring on the rosewood is lost a little under what looks like an over-deep stain or colouring, but it's far from unpleasant - although the ultra-white binding lends a less artisan appearance. Maple binding, for example, would have looked more 'PRS'; cream plastic or grained ivoroid is just that little bit classier, perhaps.

Unlike the USA acoustics, which use the pre-production 'Santana-style' PRS headstock outline, here, we get the regular PRS head shape. Whether you like this shape is neither here or there, but combining it with the large silvery SE and Angelus logos, not to mention the block PRS logo of the truss rod cover, does make it look a bit electric-like to us.

Solid old-style birds fly off up the fingerboard, which here, like the bridge, is ebony. The 'board itself is very nicely done: medium-gauge frets sit over the edge binding - it's as clean as a whistle, just like the bone nut and compensated saddle. It's all clean, in fact, just like the simple soundhole rosette and purfling that sits inside the top's edge binding.

Like the outline shape, another feature cloned from the USA Angelus is the hybrid steel X/classical fan bracing, which Smith admits is not a first for acoustic instruments, but it's certainly unusual on a more mainstream design like this. Again, the SE is slightly different:

"We added small braces between the fan braces so that if there were any wood expansion or drying issues that we don't control at that [Korean] factory, the top would stay stable," says Smith.

Internally, it's reasonably clean, not spotless, with traditional kerfed lining and spruce bracing and back bars.

Classed as a 'wide' neck profile, this seems a little bit misleading, as the nut width is actually more electric-like at 42.3mm. PRS's electric nut widths are very slightly wider; the old Wide Fat is spec'd at 42.87mm, like the standard USA Angelus.

Things are more airy at the saddle, with its spread of 56mm. Depth-wise, at the 1st fret it's 23mm deep, thickening slightly to 24.2mm at the 11th fret before the heel begins. It's actually quite a rounded D profile with none of the subtly V shape in the lower positions like the old Wide Fat or current, but very similar, Pattern profile.

While the USA electros feature just a single thumb- wheel volume control accessed inside the soundhole, here we have a more common under-saddle pickup and side- mounted preamp panel. The control lettering is pretty small and has us reaching for a torch and reading glasses in low light. That said, it's well featured, with a large rotary volume control (but without any position indicator), three-band slider EQ with subtle centre-notched flat positions, an unusual EQ bypass switch, mid contour preset, and a notch filter in/out switch with another slightly smaller rotary to sweep through those potentially troublesome frequencies.

Finally, a button activates the onboard tuner, although to deactivate it you have to hold it down. The battery and output jack are mounted in a separate plastic enclosure to the treble side of the base strap button, the battery removed and replaced via a flip-top cover. PRSes are renowned for tuning stability, setup and playability, and the SE Angelus is no different in that regard.

This feels, and is, quite a big body despite its grand concert-meets-000 dimensions. The result is a loud projecting acoustic tone full of modern high-end harmonic zing and balanced lows - not over- cooked at all, but not deficient either.

Taylor-esque balance springs to mind rather than Martin-like vintage darkness. Maybe it's the electric-like visual aspects but to our ears, it's a very rock electric player's acoustic. Yup, it sounds good strummed, and although it's quite cramped at the nut, it's perfectly usable for fingerstyle.

Plugging in, well, that preamp interface isn't the clearest we've ever worked with, but the electro performance reflects the acoustic sound quite accurately: modern, zingy and, we have to say, rather too piezo-like. Here, the midrange contour works well not just to add a preset dip - we think it changes the nature of either the midrange slider's boost or cut for a softer (wider) or harder (narrow) focus.

Certainly, cutting a little of the high end, dipping the mids and selecting the softer sounding midrange curve with a touch of bass boost gives us a more usable picked tonality. Or if you crave modernist midrange cut, it's here in spades.

Our point is that this is quite a chameleon, sound-wise, and that's all from the guitar, irrelevant of any outboard processing. The notch filter, like the volume, is a bit pot luck - there's no position indication on the rotaries - but it certainly works to cut low-end induced feedback. Shame there's no phase control, though. Again, experience tells us that a phase control can cut the primary cause of feedback instantly.

The PRS name carries the presumption of quality build and sound. Is the SE Angelus worthy? Yes. It's a very cleanly made modern electro that will satisfy many players from finger-stylists to rockier strummers. If you're a PRS fan, it's a superb addition to your collection with family resemblance in terms of style, sound and quality.

Outside of that family, though, £1k buys a lot of electro-acoustic guitar from many brands, most of which offer more diverse body styles and with them, diverse sounds and feels.