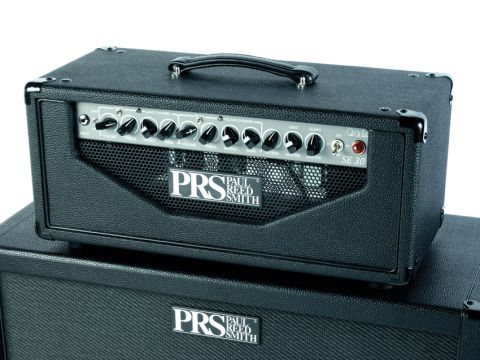 If you don't need oodles of gain, then get stuck in and simply enjoy an expressive amp that will respond dynamically to your guitar and playing style.

Given that the 'SE' moniker is shorthand for 'Student Edition', we'd be surprised to see PRS's new line of amplifiers set up behind the kind of clientele that consider 9p noodles one of their five-a-day.

Regardless, these amps are nowhere near the kind of price commanded by their American-made counterparts, and we're itching to see if PRS has what it takes to stand its ground in a crowded market.

Feature-wise, the SE 30 is fairly straightforward and very much a case of what you see is what you get. Both the clean and lead channels each have a bright switch, three-band EQ and a volume knob, with each channel also having a corresponding master volume at the far end of the front panel, along with a global reverb.

It's all too common for amp manufacturers to neglect one channel for another, so it's nice to see PRS lavish equal attention on all of the tones on offer. That's pretty much where the features end, though: the SE 30 is a pure tone-machine, and that's the main focus in its design.

Plugging in for the first time, we're immediately impressed by the lush clean tones on offer. This is a very transparent amplifier, responsive to the tonal characteristics of your guitar.

Coming from a company that pays an awful lot of attention to its pickups, it's clear that PRS wanted every detail to be picked up by the amp and that's exactly what the SE 30 does. There's a good amount of headroom for glassy cleans, but push a little harder and you'll find that this clean channel has a raunchy side that's itching to get out.

The overdrive is really organic and responsive, so there's a lot of scope for guitarists that rely more on their volume control and pickup selector rather than a multitude of pedals.

Switching to the lead channel reveals something of a mixed bag. While the amp is capable of a pretty broad range of distortion, overall we don't feel the tones are quite as exciting as those found on the clean channel. That said, the amp retains its clarity well, all the way up to classic and hard rock, and it's worth emphasising just how well this amp responds to your individual guitar and playing technique. Just make sure that the character of the overdriven sounds matches up with the tones you need as a player.

Ultimately, we're left feeling a little conflicted with the SE 30, mainly because it seems slightly expensive for a product that resides under the SE banner. Overall, construction is top notch, the clean channel sounds superb, and the lead channel is great for most blues and rock applications.