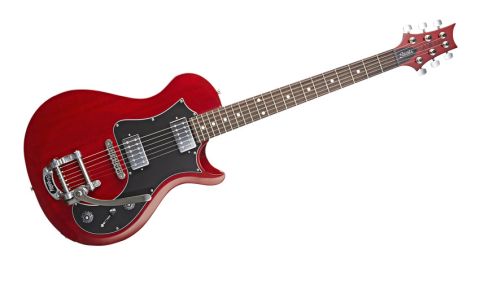 Few players won't enjoy its evocative, classic voice - the guitar that might turn doubters on to PRS.

After nearly three decades of being asked for more affordable and 'less posh' USA-made guitars, PRS has finally delivered. But is the S2 Starla too good to be true?

The new S2 guitars are all re-imagined versions of full-fat counterparts, enabling them to be sold at trimmer price points. Combining a mid-market price tag with the cachet of a US-built instrument, it could be the best of both worlds.

The Starla is still an all-mahogany guitar and the top has an asymmetric bevelled edge, a theme that originated on the PRS Mira and continued on the Starla: think SG as opposed to Les Paul Standard. The all-gloss finish doesn't have quite the crisp mirror-like reflection of the core line, but it doesn't let the side down.

The entire construction of the PRS guitar has been re-evaluated, resulting in a new three-piece neck construction, new versions of the Phase II locking tuners, a new finish process and new pickups that are designed in the USA but made in Korea.

The Starla is the only single-cut model in the S2 Series so far; the guitar's upper shoulder means that the neck joins the body at the 16th fret. Of the three S2 designs (the others being the Mira and the Custom) it's the one that has seen the fewest changes compared to the previous USA model. It's also the least traditionally PRS-like design.

The pickups are modelled on the USA Starla humbuckers - a completely different design than what you usually find in a PRS guitar, which is aimed more at a Gretsch/Rickenbacker-like tonality. There's also a tune-o-matic bridge and licensed Bigsby B50 vibrato to further set it apart from the rest of the PRS crowd.

There are Korean replicas of the most expensive Phase II locking tuners. They're a very welcome addition here, although, as any Bigsby lovers will attest, this ancient design needs some TLC to keep it running bang in tune.

Our sample performed admirably with minimal string stretching, the tune-o-matic subtly leaning back and forwards as you move the arm. For heavier use we'd think about fitting a roller saddle bridge, and we can't help thinking that it should be included as standard here.

Finally, if you think birds should only be appreciated in their natural environment and not on the fingerboard of your guitar, you're in luck. Cream plastic dots are standard fretboard appointments here; the same material birds are an option.

Plugging in the Starla, we're taken a stylistic direction that's underpinned by a rounder-nosed Gretsch-y, Ricky-like voice. You might find that you want to add some highs and lows from your amp, or indeed change your amp completely to something a little more Tweedy. It begs for lashings of reverb (and a fair dab of Brylcreem).

It's not as vicious as a typical Tele, but the magic lies with the distinct character of these lower output pickups - in both full and split- coil modes. Along with the slightly mid-hollowed resonance from the Bigsby/ tune-o-matic combo, they create the most un-PRS- sounding PRS we've ever played.

That's no complaint, though. Any player who leans on the cleaner, crunchier side of the tone tracks - be it older blues, country, rockabilly, Americana soul or indie pop/rock - will be very at home here.

This is no hastily built retro piece with funky intonation or pickups that whistle at the slightest hint of stage volume or gain. It simply exudes quality and character.

Game-changer is an already over-used phrase, but it seems the most appropriate term to describe this new S2 guitar. Does it feel like the top-flight core line guitars? Yes. Does sound like them? Pretty much. Does it cost a lot less and offer a less opulent, more 'blue collar' vibe? Definitely.

The Starla could really widen the appeal of PRS guitars to an audience who might have appreciated the good bits but just couldn't get on with the style or price. Only time will tell.