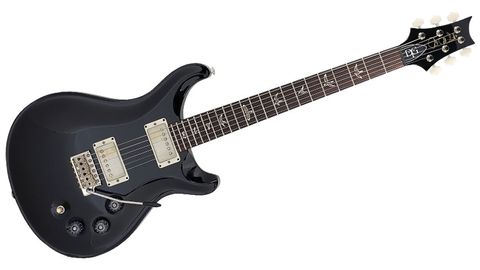 Less wide sounding than the maple- topped DGT, this Standard version is another voice: a 21st-century Les Paul Special but with expanded sounds, vibrato and PRS's legendary build quality.

Back in 1985, PRS had just two types of guitars - one with a maple top (aka the Custom) and one all-mahogany guitar that, by 1987, became known as the Standard.

It was the latter that attracted an up-and-coming Texas-based guitarist David Grissom, beginning an extremely fruitful relationship with Paul Reed Smith, which resulted in the launch of the maple-topped David Grissom Tremolo (DGT) signature guitar in 2007.

For 2012, Grissom and Smith have returned to their roots with the launch of the limited, all-mahogany DGT Standard - identical to Grissom's current DGT, but without its maple top. Grissom's new Standard, however, is a far cry from the guitar he purchased in the late 80s.

Back then, the Standard used the same body depth as the Custom, 49mm, along with 24 frets. Here, like the DGT, the body thickness is increased to a shade under 53mm and it's a 22-fret guitar, both features of the PRS McCarty model, introduced in 1994, which Grissom had more than a hand in conceiving.

Grissom's take on the PRS recipe includes numerous tweaks conceived after playing PRS guitars - Standards, McCartys and DGTs - for a quarter of a century. Along with his own neck shape, which is "somewhere in between a wide fat and an old regular profile", Grissom told us in 2008, there's bigger-than-standard fretwire, which originally started as Dunlop 6100, "but the wire proved to be very inconsistent so we found another company to replicate it".

Bernie Marsden's PRS SE signature features the same three controls (individual volumes and a master tone), but the DGT came first, and here they're placed in a very user-friendly semi-circle, along with the three-way toggle pickup selector, centred around the PRS vibrato.

The two humbuckers, in their brushed nickel covers, are unique to the DGT, too - Grissom's own blend. And while the original DGT featured coil-splits activated by a pull/push switch on the tone control, the new ones here are not technically full coil-splits - some of the dumped single coil is retained, which gives a little more fullness to the 'single-coil' split and retains some hum cancellation. This partial coil-split is appearing on more and more US-made PRS guitars.

Cosmetically, the DGT and this Standard now come with the new 'hybrid' acrylic/nitro V12 finish. The original DGT featured a nitro top coat over the usual thin polyester basecoat, the first production PRS to do so. The V12 finish was launched in 2010, and, in preparation, PRS sent Grissom a trial guitar.

"Paul said he'd been working with a chemist and thought he had something better. I played it and I'm like, 'Wow. This guitar is so alive.' At first, I thought the guitar was a little bright, but I played it for two or three days - my experience with a new PRS guitar is that you've gotta put in 10 hours on them and they will settle down and chill out in the top end. But after doing that, it was really happening, so I said, 'Okay, let's go with it.'"

Also different from the original-spec DGT are the new open-backed Phase III tuners with grained ivoroid (faux bone) buttons, instead of the aluminium of the standard spec tuners. PRS nerds will notice that these buttons are larger than those on the original DGT.

Descriptions aside, it's quite a guitar. Although it's not the lightest PRS we've ever played, to a certain extent that weight disappears on the strap because it's just so well balanced. The neck feels close to the old wide fat profile - slightly less V'd in the lower position, compared it to a 2008 wide fat. It has the same theoretical nut width of 1 11/16ths of an inch (42.86mm), though it measures 42.7mm. With a first-fret depth of 22.2mm, and at the 12th fret, 24.5mm, it's slighter deeper than the recent 'pattern' profile (the 2010 replacement for the old wide fat profile) of the recent PRS ME Quattro.

There's a chunkiness here that's very appealing, in terms of both the guitar's weight and the feel of the neck, which is enhanced by the shipped 0.011-0.049 strings. It certainly doesn't feel like a shred machine. Setup, intonation, vibrato feel and stability? All perfect and part of the well-honed PRS blend.

PRS's all-mahogany Mira is no slouch when it comes to that classic Gibson SG-like tone, and there's plenty of that here with the Standard, but the two pickups seem more polarised: the bridge pickup is quite focused in the upper mids, almost a little spiky with a pretty trim low-end. The neck pickup's low end, conversely, is ample, with that lovely PRS-hallmark vocal character in higher registers. It's a very lively guitar, too - you can definitely feel the vibrations through your fingers.

The coil-splits certainly add some Fender-ness, but it's a long way from being over bright. As expected, they're lower in output (and certainly not noiseless in terms of hum pick up) and, without changing your amp setting, clean up the gain for a very British, punchy and percussive rhythm sound. But there's no doubt that the Mira's mini-toggle switch is easier to use than the pull-up-to-engage switched tone pot used here. But set your amp up in the split mode, with a little volume reduction, for your rhythm tone, then kick into the full humbucking mode with volume full up and it's a seriously turbo-charged sound.

The dual volume controls open up even more great tones - especially useful, we found, in the single-coil mode. With both pickups selected, a slight volume reduction has quite a dramatic effect, thinning and cleaning up the sound for some stringier, twangier lower output voices. But, as we've said, it is a darker voice with a trimmer low-end, though hardly deficient.

It's rare that we don't use the tone control to sweeten the highs on many modern electric solidbodies. Here, however, we didn't touch it, though if you want more darkness, it's there, and is typically well graduated. In fact, we found that raising the high-end from the amp just gave a little more clarity.

Once again, for this writer at least, the improvements in the instrument's resonance and the way PRS makes its pickups take us further back - in a very good way - to older, classic 'vintage' sounds. It's all certainly a long way from the Standard's original more gain-friendly, thinner, mid-focused tone.

The original maple-topped DGT is one of our favourite ever PRS electrics. This one has a darker, slightly narrower voice that, tonally, sounds a little more specific and is, perhaps, slightly less versatile. It does, however, continue the theme of recent PRS guitars in sounding older and more classic than the brand's earlier guitars, and it definitely lets the player stamp their style on the instrument, not the other way around.

Sound aside, though, it's arguably a better guitar than the original-spec DGT, which is really saying something. We'd seriously suggest you compare a 2012-spec DGT with this Standard version before you make your final decision. The tonal improvements PRS is making are becoming hard to keep up with.