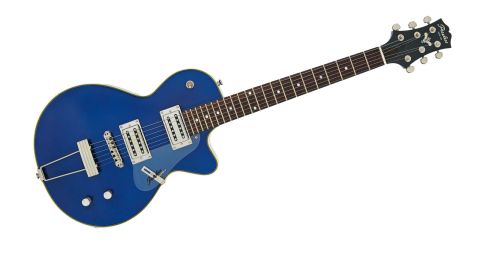 A capable small jazzer or vintage rock 'n' roll belter for anyone who doesn't want a huge box.

The Peerless company of Korea is proud of its 45-year heritage, with roots in third-party manufacturing for many more famous marques. According to company literature, peak output per month has been as high as 30,000 instruments, but in more recent times, Peerless has become increasingly focused on its own brand, scaling back production to less than 1⁄25 of that formidable former number.

These days, in addition to a range of flat-top steel-string acoustics, you'll find the Peerless name atop a wide range of broadly Gibson- and Gretsch-inspired archtops and semis, evoking plenty of jazz and rock 'n' roll nostalgia in the mid-price ranges, not least with these two new models.

The reasonably understated Jezebel has a 330mm (13-inch) lower bout width and 15th-fret neck-to-body join, and is fully hollow with additional, so-say mahogany support/sustain posts beneath the roller bridge, more of which presently.

The guitar measures 44mm at the rim, with the gently arched top and back adding approximately 20mm depth around the bridge area. The body is made from pressed laminates; a maple body with what's specced as an X-braced spruce top.

What we've learned so far is that Peerless's published specs are not exactly consistent, so whatever you read elsewhere, whipping both pickups out of the Jezebel and getting in there with the dentist's mirror returns no sight of any X-brace as we know it, just a slightly thicker piece of spruce through the centre section, and a distinctly non-mahogany sustain block: it looks more like maple.

Peerless has enlisted the help of Matt Gleeson, from Monty's Guitars of London, in its pickup designs; two low-output humbuckers in the Jezebel that look very Gretsch-smart with their parallel cutouts. Just for the record, all of the pickups are made in the Far East, which is to say designed by Matt Gleeson, not necessarily made by him. Let's plug 'em in.

When we reviewed the Retromatic P3 http://www.musicradar.com/reviews/guitars/peerless-retromatic-p3-590112, we commented on its almost "too slinky" setup. There's no such danger here, as with plenty of relief in the neck and the bridge set to fighting height, the action of the guitar will be unacceptably high for most tastes.

As it happens, this reviewer quite likes it, as it demands you get in there and engage with the thing - the extra string vibration doing things to get what top there is moving, even though they're laminated.

The neck is full in the hand, giving you something meaty and vintage-like to hold on to - 22mm deep at the first fret with a big-feeling, rounded profile all the way up. Don't expect much fun up the dusty end, however, for dusty it will remain thanks to 15th-fret neck joins and vintage-style cutaways [there's no money up there anyway - Ed].

It's also worth saying that the Jezebel is a physically light guitar, which will definitely appeal to anyone who either dislikes, or physically can't manage, a heavy instrument for whatever reason.

The smart roller bridges are fully adjustable, which is good news as the guitar needed some set-up tweaks - our sample was hastily requested, so we should bear that in mind, and our prior experience with Peerless in the set-up department has been nothing short of excellent.

The tones bring more than their fair share of smiles. Laid bare through a clean-ish amp, there are old jazz tones aplenty; the Jezebel pushing the front end just that bit harder for some extra edge up top, thanks to its more powerful pickups. The shorter scale might make the midrange a little more chewy, too.

The guitar could not be accused of being bright-sounding; instead, you get more fundamental in the note, that seems to suit all manner of rock 'n' roll, jazz and vintage blues tones; there's so much more air around the tone than you could expect from a fully solid or chambered-body guitar.

The trapeze tailpieces contribute to that general picture, too, offering resonances and vibrations that are absent from a more solidly fixed bridge.

Despite its vintage styling, the guitar remains entirely relevant because the tonal and stylistic influences of late-50s/ early-60s music in contemporary culture are as strong as they've ever been. You could easily imagine anyone from Dan Auerbach to JD McPherson to Jake Bugg to Anna Calvi with one of these slung round their shoulders.

Sure, there are aspects of this guitar that is a long way from perfect. Indeed, Peerless's own marketing sets you up for a champagne experience, leaving you slightly deflated when the guitar delivers a beer reality.

Nevertheless, there's undoubted charm and likeability on offer, not to mention seriously usable, engaging sounds. We'll turn to the mythical Jezebel herself - immortalised in song by all manner of artists - for help with a conclusion. She was pretty untidy around the edges, and encouraged poor old Ahab to do all sorts of naughty things. But boy, was she a lot of fun by the sound of it - a lot like this guitar.