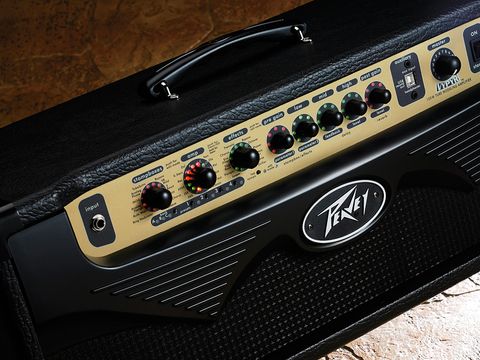 Easily up there with the best the modern hybrid amp world has to offer, the Vypyr Tube 120H is destined to be popular with guitar players who need to access a lot of sounds. Is that you?

In 2008, as a result of a partnership with effects experts Damage Control and a reported $10m investment, Peavey introduced the Vypyr, its all-singing foray into the world of digital modelling guitar amplification.

We checked out the Vypyr 30 previously, but the company also introduced a trio of intriguing hybrid amps - the Tube 60 and the 120 head and combo. The Vypyr Tube 120H is a 120-watt head that's jampacked with features and sports one of the most powerful digital processors used in any amp.

This Vypyr's power stage is styled after Peavey's 6505, utilising four 6L6GC power valves, producing a plentiful 120 watts RMS. Instead of all-digital operation, the preamp is coupled with a single 12AX7 preamp valve and Peavey's TransTube circuitry. Peavey claims that this circuit should provide, "much warmer and responsive harmonics, overtones and dynamics than an all-digital equivalent."

Check it out in action:

A '32-bit floating-point SHARC processor' takes care of all the amp's digital effects and interface leaving the analogue preamp to look after the amp tones and distortions, freeing up the processor for up to four simultaneous effects (either stompbox, rack-mounted, delay or reverb), better effects quality, increased editability and a built-in 30-second looper.

In terms of aesthetics, Peavey has kept the classic spiky logo, alongside the Vypyr's bat-like plastic front panel. However, the gold-fronted control panel, paired with black control knobs, does give it a classier look than the non-valve models.

Build-wise, the particleboard cabinet feels sturdy and none of the knobs feel loose or flimsy. As is common across the majority of the Vypyr range, we get 12 digital amp models ranging between classic and more modern boutique-style amps, each with a 'clean' and 'dirty' setting, giving the head 24 amp variations in total.

Each amp model has its own EQ setting that can be edited by the WYSIWYG interface. Holding down the 'amp' knob loads the chromatic tuner mode, indicated by red and green LEDs. In addition to the amp models, you get 11 preamp stompbox effects and 11 post-amp virtual rack-mounted effects.

Selecting effects is relatively straightforward, and once selected, pushing in the effects knob will put you into edit mode. The front panel's 'pre-gain' and 'low' pots then become your two parameters for adjusting stompbox or rack effect models.

We also have independent reverb and delay effects, and in edit mode the mid and high pots give you control over delay times and repeats (there's a small tap-tempo function under the effects knob and a tap-tempo footswitch on the Sanpera II as well), while the post-gain control will adjust the reverb's depth.

In fact, once you've got your head around that, editing and setting up your effects and amp models follows the same process. You can store up to 12 sounds (400 with the Sanpera II) in three banks of four, which are then selectable via the mini switches under the 'amp' knob. Saving sounds is very easy too.

Stompbox or rack effects can simply be bypassed, but to bypass the delay or reverb you need to enter edit mode and turn each parameter of the desired effect completely off. An overall master volume is adjustable on the fly, whereas the level control acts as your individual volume for each chosen model and is editable for each of the models available.

On the front we have auxiliary (iPod/MP3) and headphone mini-jacks, as well as a USB 2.0 interface that connects the amp to a computer for direct recording, making the amp an audio interface. It doesn't need any drivers, so plug it in and your computer should recognise it.

Our Vypyr came with the bespoke Sanpera II footswitch, recommended for this amp. To activate the onboard looper, make use of expression features, utilise five effects simultaneously and have seamless preset switching, the footswitch is essential, though it does cost an extra £149.

Clearly, the Vypyr Tube is very versatile. To highlight this point we set up four presets to go from 'clean to mean' for maximum gigging flexibility. Kicking things off, we have a Marshall 'Plexi'-style amp set with a BOSS CE-1 analogue chorus model. The Plexi model features a thick and chesty low end, but is still cutting and surprisingly vintage-sounding.

Mix in the chorus and you've got a real nod towards an Andy Summers/Police tone - big and bright with just enough chorus wobble and sweetness. Also, the Brit model, based on a classic Vox AC30, offers up great squeaky-clean tones and convincing Beatles jangles.

Second along is a Deluxe amp on clean, a Tube Screamer model with moderate gain and a dash of reverb. This is a lush, very Fender-y rock tone that delivers the perfect amount of break-up and drive for Snow Patrol-style chorus strums.

Thirdly, we called up the B-Kat (a Bad Cat model, we presume) amp model, set with gain around halfway on the overdrive selection and no other parameters. This is straight-up classic rock tone; it has an American boutique, Class A vibe about it and with crushing saturation it will take on any pumped-up heavy rock with aplomb.

Finally, we go mean: a Diezel with gain fully cranked. Its character differs greatly from the Vypyr's other metal-styled amp offerings, delivering powerful and cutting metal tones adaptable for either devastating chugging or rip-roaring solos. For extra width, we added a touch of analogue phaser to achieve true stadium metal sounds. Overall we found that for this kind of full-throttle metal riffing, the K-Stein, Dzl and Rec models gave the most in terms of tone and power.

In the last two years, the modern hybrid amp dream - modelling preamp plus valve power stage - has become a reality. The Vypyr sheds the hard digital response and noise issues of the first-gen digi amps, and the amp and effects models are impressively responsive - easily on par with Line 6's Spider Valve MkII.

The harmonics, tone and unpredictability that an all-valve amp brings to the table is, however, still superior - in this reviewer's opinion - to the majority of digital reincarnations currently available. That said, the Vypyr Tube 120H is a very promising look into the future of technology-based amps; it's far more valve-y feeling than the first generation of hybrid amps.

And what sort of valve-amp-plus-every-effect rig can you get for £510? Overall you're getting a huge amount for your money and if you tackle the Vypyr Tube head-on, you'll soon get used to the interface. To unleash the amp's potential, especially as a gigging tool, you'll need to pay extra for the Sanpera II switch. It's the key to the Vypyr's Pandora's Box, and still brings the package around £650. Plus a cabinet, of course…