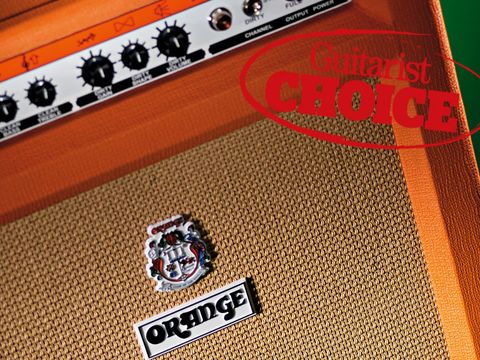 Simple, loud and versatile - this ticks a lot of pub and club gig boxes.

First unveiled at Winter NAMM 2010 back in January, the circuit inside Orange's new TH30 head and combo is something of mash-up, combining elements from the Thunderverb, Dual Terror, Rockerverb and the now-discontinued Rocker 30.

Although there's plenty to be said for the mighty roar of the company's 50 and 100-watt amplifiers, for this writer at least, ever since the AD30 arrived in the late nineties, there's been something a little bit special about EL84-loaded Oranges with 30-watt power stages.

Will this TH30 combo be another citrus-flavoured hit? Time to find out.

It's fair to say that the last few years have seen Orange prove that it can do small valve amps rather well. If imitation is indeed the sincerest form of flattery, then the Tiny Terror's success can be measured not just in units shifted, but also by the huge number of copycat designs that followed.

Evidently, the TH30 is a much less radical proposition, but for all the revolutionary force attributed to the electric guitar when it's played in anger, we guitarists are a seriously conservative bunch.

Although there are few cooler onstage sights than an Orange head sat on top of a couple of the company's fantastically overbuilt 4 x 12 cabinets, years of hauling heavy amps up narrow pub staircases is enough to steer even the most nihilistic rock 'n' roller towards pragmatism.

Your spine, your shoulders and the soundman will all thank you for turning up to soundcheck with a 1 x 12 combo; leave the stacks to the handful of fortunate souls with their own road crew.

We've said it before, but a 30-watt, 1 x 12 valve combo is in many ways the perfect gigging amp. Bigger 2 x 12s are often too heavy to carry around with one hand and far less inclined to sit safely on the passenger seat of your car.

While some players can get away with less wattage, in most cases a sensibly designed 30-watt valve power stage hooked up to an efficient speaker will provide more than enough clean headroom to compete with even the hardest hitting Butterbean look-alike tub thumper.

Orange's last stab at this format was the aforementioned Rocker 30, a raunchy little beast capable of some high quality tones, but the combination of EL34 power valves and just a single volume control with no EQ on the clean side of the equation left some players wanting more flexibility.

Enter then, the TH30. "The idea behind the TH30 was to make a very versatile amp with as few controls as possible," explains Orange design guru, Adrian Emsley.

"People were also asking for an FX loop on the Rocker 30, so we added a super low impedance, valve-driven one on the TH30. I was pretty pleased with how the output stage on the Dual Terror came out both functionally and sonically, so we used the very same output stage on this one.

"The clean channel has the same interactive bass and treble control as used on the first series Rockerverb, but has been re-voiced for EL84s and uses a branched power supply to deliver more headroom and spank.

"The dirty channel is a four-stage with the same amount of gain as the Rockerverb, but with the inclusion of the shape control found on the Thunderverb."

Not only does the TH30 have the same output stage as the Dual Terror, but it also shares that amplifier's variable power switching, pushing out 30, 15 or seven watts depending on the way you have the chunky half/full power and two/four output valve toggle switches set up.

This means that you can easily tailor the amp's output and headroom to suit your needs, be it getting power tube saturation at studio-friendly levels or maintaining clarity on larger club-type stages.

Build-wise, this chunky little combo looks more than tough enough to withstand the rigours of touring and it's consistent with the high manufacturing standards showcased by the updated Rockerverbs we've praised in the past.

If anything, this combo's less busy control panel looks even smarter than the RK50C - it's certainly a doddle to get one's head around, even under moody stage lighting. As with all Orange amps, the TH30 isn't exactly a shrinking violet in visual terms, but this cat really digs those funky retro stylings.

Thunder by name, thunder by nature. Despite its compact size, the TH30 is capable of making one hell of a racket. With a Fender Strat plugged in, on full power the clean channel has a three dimensional quality and bags of additional spank.

Taming the power stage by switching it down to 15 or seven watts inevitably makes for a spongier attack, but even at the lowest power setting there's a surprising amount of clean headroom available.

This is a different clean experience to the early break-up of Orange's older 30-watters such as the AD30 and Rocker 30. Of course, humbuckers make it much easier to get your growl on, but single-coil fans only need a decent overdrive stompbox in the chain to bridge the gap between the channels.

Over to the dirty channel then and, well, it's a beast. Don't be fooled by the spartan appearance of the control panel: the interaction of the volume, gain and that all-important shape control inherited from the Thunderverb series - essentially a mid-range EQ sweep - can take you from raunchy mid-rich blues-rock crunch through to AC/DC on steroids into full-bore scooped extreme metal territory.

The four-stage dirty preamp inherited from the Rockerverb series has colossal levels of gain and easily turns a Telecaster bridge pickup into a heavy metal monster.

With humbuckers, the full power mode keeps the bottom end tight, while the 15 and seven-watt settings introduce a little more sag and swampiness suited to grunge and heavy alternative rock sounds.

The lack of a dedicated gain control on the clean channel means that, in 30-watt mode at least, this isn't the easiest Orange to get rootsy sounds from when armed with singlecoils. However, the range, scope and quality of the tones on offer is seriously impressive, and all from just six control knobs.

Despite the stage-filling projection of its ported cabinet, the TH30 combo is compact, cute and easily portable. Throw the variable power switching into the mix and you're looking at a dangerously tempting, versatile package.