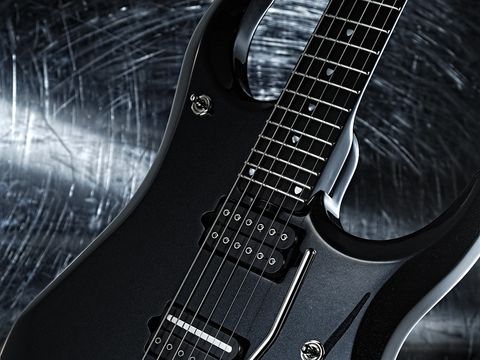 It's difficult to conceive how Music Man will be able to improve significantly on this version. A guitar most definitely deserving of both names on the headstock

Music Man has a hugely impressive list of endorsees, none of whom has more signature models than John Petrucci of Dream Theater, a band whose international success and renown needs no underlining here. Petrucci's outstanding abilities require an exacting series of guitars and in 2010 we saw the introduction of the JPX to mark his 10-year association with the Californian company.

The development of JP's guitars is an ongoing process, and new for 2011 is the JPXI, complete with a number of refinements. Perhaps the most important and noticeable is the almost flat 508mm (20-inch) fingerboard radius.

Compare that to the 241mm (9.5-inch) radius of an American Standard Stratocaster, the 305mm (12- inch) of a Gibson, or the 305- 406mm (12-16-inch) conical radius of a Jackson DK1 Dinky, and you get the idea. In fact, the only other production electric we're aware of with such a flat radius is Allan Holdsworth's Carvin HF2.

"I wanted to go for a flatter fretboard, to do something drastic," explains Petrucci. "So we started with 20 inches to see what would happen and I fell in love with it. The idea was to get a smoother feel, and I'm all about making the guitar as easy to play as possible."

In addition, the stainless steel frets have been changed to a gauge that fits neatly between the wide, jumbo wire used with the JPX and the thinner, higher profile utilised on the BFR models.

"Another thing that we changed was the neck carve," continues Petrucci. "I was trying to get it so the neck was really not getting in your way, and it's actually slightly thinner than on any of my other guitars. The rear contour also changed, so it's more symmetrical. It's a taste thing and it's certainly not traditional, but it's really cool."

The net result is among the most playable necks on any out-and-out rock instrument we've ever encountered. Perfectly in tune along its length and silky-smooth both in front and behind, the JPXI is remarkably good in the hands. Music Man has a superb reputation in that regard, but this feels on another level again.

Pickups comprise a DiMarzio Crunch Lab in the bridge and a LiquiFire in the neck - official Petrucci models - and it's worth noting that, on the seven-string versions of John's guitars the Crunch Lab is reversed to set the blade coil closer to the bridge. "It's a subtle difference but definitely noticeable," he remarks.

Where the JPX offered a five-way lever pickup selector switch, the JPXI is equipped with a three-way toggle - a second one flicks between the magnetic and piezo pickups mounted in the bridge.

In addition, some ingenious wiring allows you to assign two choices of coil combination for the central position of the pickup selector: pull the tone control up and you have the two inner coils of the humbuckers together in series, down and it's both humbuckers in parallel. Clever stuff.

To make the most of the guitar's inherent versatility, it's equipped with a pair of output jacks to route signals to two separate destinations - the DiMarzios to your guitar amp of choice and the piezo to an acoustic amp or PA. The mono output provides a buffered and mixed signal from both sources for conventional use going into a single amp.

Controls comprise a volume and tone for the DiMarzios and an output for the piezo, which is augmented by a trio of reverse-mounted trim pots that allow you to set the bass, treble and mix. The latter regulates the maximum level of the piezo and is disabled when the guitar's stereo output is used.

The unmistakable body is bereft of the JPX's innovative chambering and is constructed from solid alder with a maple top. Inside lies a partial centre block made of mahogany, described as a Tone Block.

"The mahogany runs through the centre of the body, so the pickups and bridge are mounted into it," clarifies Petrucci. "It's a block that's fitted into the guitar - it's not like a through-neck type of thing with wings glued on."

With a suitably high-gain amp setting, Petrucci's thick yet transparent rhythm tone is immediately apparent. It's wider and warmer than James Hetfield's crunch and tighter than Kerry King's brutal maelstrom.

When using extended chord voicings, the JPXI sounds almost down-tuned, and when playing solos, single notes truly soar. Legato runs on the LiquiFire humbucker are fluid and round, with a tone that sits somewhere between Vai's more scooped neck pickup tone and Satriani's middly honk.

But it doesn't have to be all about high gain - it's equally powerful when clean: toppier than a Les Paul, yet remaining full and lucid. Slathering the tone with Petrucci levels of modulation and delay does little to muddy the string clarity, and the custom central position selection is very single coil-like in character, leaning more towards the twang of a Tele than the sparkle of a Strat.

The piezo system sounds excellent, too, and the flat radius gives at least the feel of idly strumming an acoustic. For picked arpeggios or adding width to chords, mixing it in with the DiMarzios and a spot of chorus works wonders, and the aforementioned custom central selection is especially useful here.

While Petrucci's music appeals to only a certain section of the rock crowd, it'd be a travesty if his new guitar was dismissed simply due to his association with it because, on balance, this is among the best rock axes we've ever played.

The neck is truly something special - we're happily surprised by the buttery nature of that whopping, almost classical-like 20-inch radius. It works stunningly well.

The high-octane pickups are reined in by the inventive body construction to give a rock tone that's not only crushing, but as articulate as you care to make it. The addition of the piezo and a second output raises the versatility stakes still higher and, overall, we're hard pushed to isolate anything we'd change.

It's hardly cheap, but for a USA-made guitar of this quality and spec it certainly isn't over-priced. All up, this could easily be any technique-driven rock player's dream axe. You simply must try one.