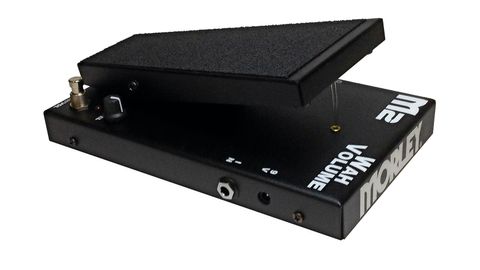 A rugged, functional and cost-effective pedal for foot control of volume.

Some guitarists may wonder what the point of a volume pedal is: why have yet another pedal on your board when you can just reach for the knob(s) on your guitar? There is logic in that, but many guitarists find foot control of volume an invaluable asset, especially when both hands are too busy for knob twiddling.

Pedal steel players rely on volume pedals that offer a smooth taper from silence to full-on, often favouring units made by Goodrich and Ernie Ball. And it's this smoothness that has seen many regular guitarists gravitate towards these pedals when they want swell in notes and chords.

If that smooth taper is what you are looking for, Morley has a new volume pedal (as part of the M2 range) that may also fit the bill, which might be just what's needed to tempt reluctant guitarists, as it also features a wah function.

With quite a large footprint, at 145mm by 230mm, the pedal is solidly built with a sheet metal chassis and treadle. The treadle is topped off by rubbery non-slip material and has a stiff action so you can park it without risk of it shifting.

The M2WV runs from a 9V battery or a power adaptor, and adds a wah to the volume- adjusting capability of sister model the M2VO.

A standard footswitch toggles between wah and volume functions, while a rotary knob sets the level of the wah. The range of volumes goes from about unity to a substantial boost, which means that as well as kicking in the wah you can get a bit of extra drive for your amp if desired.

When you switch in the wah, you'll be at the trebly end of its range if you've been running the volume pedal fully on, but there is also the possibility of leaving the treadle at a set position and switching in for a static boost at a particular frequency.

When in use as a wah, the treadle offers a wide tonal range from low to high, and delivers it smoothly from heel to toe. It has a different feel from the sort of vintage-style wah some players will be used to, because the treadle travel distance is much greater, making the 'wow' of the effect perhaps not as pronounced or sharp. But it's horses for courses and the Morley is still capable of being very expressive.

The dual functionality of the M2WV may be worth the outlay if you want two different jobs done while conserving some precious pedalboard space.