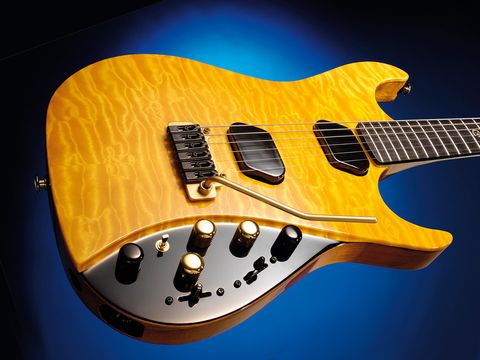 Fans of existing sustaining guitars and devices should check this out - there are some very special and unique sounds here. It's just too expensive for most of us to experiment with.

Moog is not exactly a stranger to the electric guitar. A tie-up in the seventies between Moog and Gibson produced the forward-looking Gibson RD Artist. The new Moog Guitar, however, is completely different.

Designed by Moog associate Paul Vo in conjunction with Zion Guitars owner Dale Brown (Zion is building the guitar part of the project), the new instrument uses unique analogue circuitry that takes sustain guitar technology - most commonly employed by Fernandes - one step, no, actually quite a few steps, further.

Zion has been building drop-dead gorgeous 'boutique' style guitars for a couple of decades and the platform for the Moog Guitar is exactly that: a maple 'drop-top' boutique beauty.

In terms of retail price, even without the fancy electronics, it would easily cost half, if not two-thirds of the hefty cost of the Moog package.

We don't have space here to go into great detail on the guitar itself but it's all you'd expect, aside from perhaps a glued-in maple neck, as opposed to a bolt-on. It's a big rounded neck too - 20.8mm deep at the first fret; 23mm at the 12th - with big frets on a modern (305mm) cambered ebony 'board.

The integration of the Moog part is classy. Note the black relieved headstock, leaving an almost Parker-like skeletal raised portion that mirrors the black control area relief - stylish and beautiful.

Turn the guitar over and you see a huge backplate covering the Moog electronics (the separate battery compartment powers the piezo bridge system). A five-pin output socket on the guitar's side connects via the supplied cable to a mains powered footpedal, with audio out for the magnetic and piezo sounds (and CV in), which also powers the electronics.

A separate standard jack output is for piezo only, for example, if you're using a PA or acoustic amp. Control-wise it's busy, with five rotary controls, five-way and three-way lever switches and a mini toggle.

Where to start? Well first let's ignore the fancy electronic possibilities and listen to the guitar in both its magnetic and piezo modes.

First off, the required special Moog strings don't feel great, as if they have some kind of coating. Although they are roundwound they have a slightly 'plunky' flatwound feel and response. Not that you'd notice with the piezo sound that's bright in the extreme, with excess hi-fidelity and sizzle.

Pulling down the treble on our AER combo and reducing mids gets us in the modernist acoustic-like ballpark but far from an old Martin flat-top sound.

Mind you, the magnetic sound is also out of step with the mainstream. Aside from some background noise issues (this is a production prototype and these will obviously be sorted), the pickups are really very powerful and trying to get a clean sound we have to reduce our preamp gain to a place where cobwebs live.

Even then the fruity, barking midrange clouds the quite open and resonant (strings aside) unplugged voice of the guitar. With gain, as you'd expect, things come to life and with some experimentation - way beyond our normal amp settings - we obtain an okay general rock tone.

With heavier gain, the lack of high-end and detail sounds like someone has thrown a thick cloth over our ears. Also there's some odd response: the low E and B strings are noticeably quieter.

Moog says that it's aware that the output is too strong and will tame it on the production models. But Moog should also consider the voicing as, on this evidence, it's far from a standard guitar in terms of magnetic tone - especially at boutique prices.

Initially daunting, the considerable controls (which make a Fender Jaguar seem like the most simplistic guitar ever conceived) are rather cramped on the control 'deck', especially when you've screwed in your vibrato arm. Again some prototype issues throw us some curveballs - not to mention general unfamiliarity - but gradually the fun begins…

See Guitarist's Simon Bradley put the instrument through its paces in the video clip below:

In the basic Full Sustain mode (with the Moog filters disengaged) and the magnetic-only voices, the Vo Power control introduces the other-worldly sustain like a volume control. Now it's not unique as a sound, but less random and buzzy than the Fernandes Sustainer and although it works on all notes, some are quicker to vibrate and therefore sustain more quickly than others.

With the filters disengaged, the footpedal acts as the Harmonic Blend, bypassing (we think) the rotary control - as you push down on the treble, the sustain/feedback becomes more fundamental. As you heel down the higher harmonics are emphasised and the sound becomes higher pitched (apparently on the production model this will be reversed for a standard wah-like configuration). It's a very natural sounding part of the feedback-like sustain.

Controlled Sustain mode focuses electronically on the single note, or notes, you're playing and successfully mutes the other notes so you don't have to worry about damping. Anyone who's used E-Bows and sustainers before will know how convenient that is, especially with higher-gained, high volume amp sounds.

The Mute mode turns the guitar into, well, a banjo with very short clipped sustain. A little odd, though it might be handy for the occasional special effect (although one of the Moog distributor's staff told us this was popular with shredders who love their gain and use it to articulate their blurred note cascades).

For the two Moog filters, think slightly squashy wah, and more squashy wah. The footpedal acts like a wah to control the filter sweep while the Harmonic Blend comes into play (doing what the footpedal did previously). You can apply the filters to the different sustain modes.

But seemingly plagued by the background noise, not to mention the slightly odd string output, it's not as easy to 'see' the final effect with this prototype. Certainly, factor in the solo or combined piezo, which can be sustained as above, and the potential is vast.

It's just that the basic magnetic sounds make it less useful than it should be as a regular guitar and the piezo really needs some extensive outboard EQ to make it musical. Yet despite these quite substantial drawbacks, it remains - potentially - the finest sustainer guitar we've played and we look forward to auditioning the production model, hopefully, after it's received a few more tweaks.

Bearing in mind the cost of the guitar platform plus the additional electronics and sonic potential, the Moog guitar isn't especially expensive, when you consider the no doubt substantial development cost.

Although some prototype issues cloud the fun, it's easy to see that for a creative player, the Moog Guitar has tremendous potential for creating genuinely new sounds. For a professional musician the substantial outlay is justified if, for example, it helps colour, or indeed create, a hit song. As a studio rental tool, there's also massive potential.

But, at the moment, most of us will either have to use the still-effective Fernandes Sustainer, the more quirky, random E-Bow or - in time-honoured fashion - crouch in front of our amps when requiring that otherworldly sustaining feedback sound. That is, until Moog can integrate this highly creative technology into a far, far lower priced instrument. We hope it happens soon.