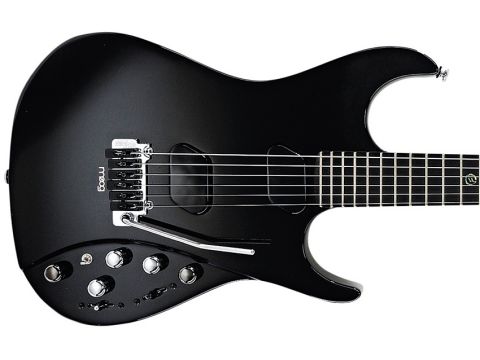 An innovative approach has created a new genre of our chosen instrument. If you want easily controllable and infinite sustain, this Moog is the place to find it, albeit at a price.

We took a look at the first incarnation of the Moog guitar back in September 2008. That was the Paul Vo Collector's Edition, named after the designer and not cheap at £4000. Since then, Moog has developed a production model, the E1, which is equipped with the same innovative electronics and pickups as the original, but which ditches the flashy gold hardware and exotic woods for a more 'affordable' package with chrome hardware, a solid alder body and a choice of fixed or vibrato bridges.

The E1 can be used purely as a conventional two-pickup electric guitar and the onboard piezo 'acoustic' sound can be blended or output separately. But its raison d'être is to provide infinite sustain. It also has a built-in Moog filter for wah and envelope effects.

With its modern, double-cut body, the E1 looks classy in gloss black - red and butterscotch are the other options - and is constructed to a high standard, with a fixed neck that has been painted to look like a bolt-on. Jumbo frets on an ebony fingerboard make for comfortable playing, although the action on the review model is set much too high for our taste.

A lot of internal space is obviously needed for the electronic gubbins, necessitating most of the guitar's back being taken up with a large access panel, but the weight distribution seems okay and the instrument balances well on a strap.

While the E1 has a jack output specifically for the signal from the piezo pickup, the main guitar output is via a special lead to an included foot pedal that is plugged into the mains, powering the whole ensemble. The audio output is a jack socket on the side of the pedal, with the level set by an adjacent knob - a useful addition as the output from the original Paul Vo Edition was way too loud.

Hear it in action, beginning with the bridge pickup:

Now here's the bridge pickup with the Moog filter:

With the many functions that it has, the E1 obviously needs a fair number of controls and Moog has opted for five knobs, two three-way and one five-way switch - an array that looks complicated at first glance, but is pretty logical once you get the hang of it.

Overall output from the guitar is controlled by a master volume knob, while the five-way pickup selector provides four variations for the magnetic pickups plus piezo pickup only. A separate knob sets the blend between the piezo and magnetic pickups and runs from piezo only to magnetic pickups only.

Tone can be adjusted by the tone/filter knob, but only if the filter function is turned off at the small three-way toggle switch. The other two positions of this offer different filter types - an articulated filter and a Moog filter - and if either of these is selected the tone/filter knob controls the filter's resonance.

The rest of the controls directly affect the sustaining functionality - known as 'Vo Power' in Moogspeak. First up, the three-way mode selector offers 'full sustain', where all the strings sustain equally, or 'controlled sustain', which offers a more manageable playing experience, where the electronics kick in to sustain the notes that you've picked, while actively muting any others. A third 'mute' mode mutes the strings shortly after you have picked them to create a staccato sound.

A knob adjacent to the master volume turns up the amount of sustain from zero to maximum. It's placed in an ideal position for tweaking with your little finger, so you can go quickly from a conventional guitar sound into sustain mode.

The final knob is the 'harmonic balance' control, used for switching the Vo Power from one pickup to the other - changing the sustain tonally. It has a centre détente position where the power is equal on both pickups.

Dependent on how the controls on the guitar are set, the pedal's treadle offers real-time parameter adjustment. With the filters turned off it takes over the role of the harmonic balance knob, but if either of the two filters are selected, it either acts like a wah pedal, controlling the cut-off frequency of the Moog filter, or sets the articulated filter's start frequency.

It's an electric guitar, for sure, but not as we know it. Time for a cuppa?

Endless sustain is the most important feature of the E1 and it's beautifully implemented in the way that it responds to your fretting finger pressure/vibrato. The whole thing is really tactile and it's a joy to experience a note start off as sustain and then take off into gorgeous harmonic feedback.

The harmonic balance, as implemented by the foot pedal, adds to this experience, enabling you work the note. Pressing down conjures high harmonics while heeling back leans towards the lower harmonics. With a bit of practice, hand and foot coordination results in really interesting changes in timbre and sustain as you play.

The full sustain mode is useful if you want chords gently swelling or taking off into feedback but needs a fair bit of physical fretting and hand muting to stop things getting messy - controlled sustain is much more user-friendly.

The other hi-tech aspect of the E1 is the filter function, which works fine, offering lots of different flavours of wah and synth-like sounds that are delivered either via the pedal or your picking dynamics - funky, but ultimately of limited use in other styles of music and a side issue compared with the sustaining function.

With the Vo Power and filters turned off, the E1 has its own character as an electric guitar. Moog describes the pickups as "darker than your classic single-coil pickups but much brighter and more open than the classic PAF humbucker", which would put them somewhere in P-90 and mini-humbucker territory and they do seem to have more top-end dialled into the voicing than in the very dark sounding Paul Vo Edition models. This creates a guitar that you could use with confidence in a variety of musical genres.

Our previous criticisms of the piezo pickup in the Paul Vo Edition no longer apply here either. This one is very nicely voiced, without too much top-end sizzle. Typical of the genre, you wouldn't choose it over an acoustic if one was conveniently at hand, but it's a passable onstage substitute and it's definitely useful for blending in with the magnetic pickups to add an extra tonal element to your playing

The Moog E1 takes the infinite sustain thing as far as it can presently go, offering more versatility and consistency than other methods, and real potential for creativity - rest assured, we'll be hearing this on some major recordings before too long.

The shortcomings of the prototype have been tackled, resulting in an instrument that ought to be much more appealing to the mainstream - so it's a shame the price most certainly isn't! As it stands, access to unleashing the sonic potential of the Moog guitar will be limited to a select few.