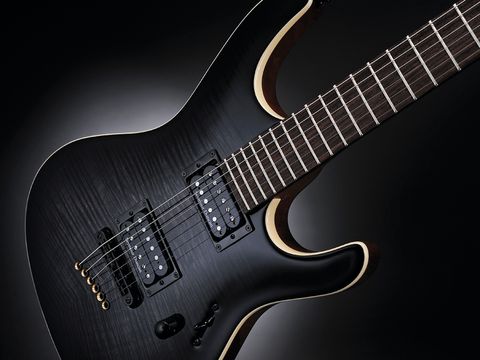 Do we really need another twin-bucker rock machine clogging up our music shops? When it's as good as the Setius GTM6, why the heck not?

Mayones is one of the best-kept secrets in the guitar world: even if you've already heard of the Polish brand, you might not be aware that, far from being a new kid on the block, the firm is celebrating its 30th anniversary.

But this could well be the year that Mayones finally breaks through in the UK, courtesy of an increased profile via its exclusive UK dealer, Guitar Guitar.

"The Duncan JB combines beautifully with the GTM6's tonewoods to produce plenty of note separation even as the gain climbs up to obnoxious levels."

So why don't we know more about Mayones? Well, the firm's list of endorsees deals in the more obscure end of the European metal pool - Saim from French outfit Pitbulls In The Nursery, anyone?

But that hasn't stopped the firm getting a good rep among pros. Limp Bizkit's Wes Borland, Periphery's Misha Mansoor and the legendary John Paul Jones are just a few of the artists who have discovered that Mayones does things the right way.

Opening up the guitar's case, we share the rock stars' enthusiasm. The Setius's sculpted mahogany body is teamed with a flamed maple cap, while the slim, five-ply mahogany and maple neck is bolted to a tapered neck heel, and a deep treble-side cutaway allows unfettered access to the upper frets.

The finish is flawless everywhere and while a flamed top can make some rock guitars look garish, the GTM6's black hardware, cream binding and marker-free rosewood fingerboard tame its effect to produce an elegant package. The guitar also features through-body stringing and a recessed tune-o-matic-style bridge.

This GTM6 is the 'standard' model, but this doesn't mean you're deprived of options. You can choose either chrome or black hardware, a gloss or matt finish on the back of the body and a few pickup choices.

While our guitar comes with a Seymour Duncan SH-4 JB and SH-2 Jazz Model combo, you can spec a pair of DiMarzio Air Norton 'buckers or EMG 85 (neck) and 81 (bridge) units. You can also plump for Seymour Duncan P-Rails at extra cost.

The control panel includes a master volume control - with coil-split if your chosen pickups accommodate such a function - a master tone and a three-way lever-style pickup selector switch.

Standard features include the Schaller strap locks and quality hard case, and you can get the GTM6 as a 686mm (27-inch) scale baritone too.

At 645mm (25.4 inches), the scale length is a whisker short of Fender's 648mm; compared with a shorter 629mm Gibson scale, it gives the guitar more piano-like note separation on the lower strings - great for clarity and tuning stability with chugging metal riffs. The level of sustain is exceptional, thanks in part to the bridge choice and through-body string achoring.

Most of us know where we are with the Duncan JB and Jazz partnership. As this is an inherently bright-sounding guitar we immediately find ourselves dialling back the treble a touch at the amplifier.

The JB combines beautifully with the GTM6's tonewoods to produce plenty of note separation even as the gain climbs up to obnoxious levels. It's actually a bit unfair to pigeonhole this instrument as a rock/metal/shred guitar - it's more of an all-rounder, especially with these pickups.

Blues, country, jazz and classic rock tones are all within the Setius's reach. But if that doesn't sound mean enough, we'd wager the EMG-equipped version would be more suited to those who think mid-gain is something that happens to other people.

Look, £1,279 is not a lot of lolly for a guitar of this quality. Some will happily pay that for a pointy mass-produced thing from the Far East.

Each to his or her own trade of course, but there's something about a guitar that's been so well crafted and well-thought out that just works. It plays like a dream, looks the business and should help to put Mayones on the map in the UK. The Euro-metallers have had them to themselves long enough!