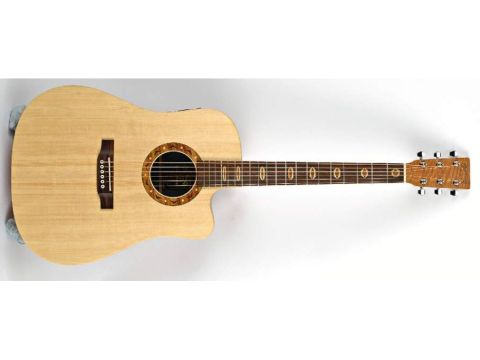 It's divisive in looks and format - but plays well and sounds good.

Martin's X-Series might split opinion, but there's no denying the financial benefits. At £999, the DCX1E Tawny Satinwood represents the pinnacle of the range and isn't cheap, but measured against the rest of the Martin catalogue it's a relative bargain.

"These guitars don't need lacquering or binding," explains Martin's Dick Boak. "They're much easier to make than our traditional guitars."

The first point for consideration, inevitably, is the HPL body. It's built by laminating multiple layers of wood fibre under high pressure, then 'wallpapering' the result with a digital photograph of real wood (complete with authentic grain).

It's a divisive concept that looks pretty good in the flesh, with the added benefits of the ultra-hard HPL increasing resistance to warping and a generally quite rugged feel.

If the body passes as 'normal' at a glance, the Stratabond neck announces its presence from a mile off. Built using a similar concept as mentioned above and bolstered with a mortise join, the only drawback is that the compressed strips don't have a photo finish, leaving purists to bemoan the striped effect.

They might be placated by the soundboard. Early X-Series acoustics were made entirely of HPL, but Martin has conceded ground since then and started to introduce solid wood tops on selected models.

So the DCX1E offers an attractive, straight-grain slice of Sitka spruce, embellished with a love-it-or-hate-it soundhole rosette of koa, maple and rosewood, and throwing in a Selmer Maccaferri-ish cutaway.

It's a welcome return to traditional build values, and it's good to see it braced with an A-frame 'X'.
In contrast to the materials, there's nothing particularly wild about the dimensions of the DCX1E, which combines its 123mm rim depth with reasonably airy nut and bridge measurements, making for strong fingerstyle and flatpicking.

The modified low oval profile isn't as immediate as some, but it lets you dig in and combines well with a rosewood board whose smooth run makes up for tasteless inlays.

When you try a Martin, you're looking for that vintage 'boom'. Past X-Series models have come close, so it's a pleasure to report that the DCX1E gets closer still, with a raw and amped tone that goes some way to easing any not-real-wood preconceptions that surround this acoustic.

To keen ears it's apparent that something is missing from the mix - a sandwich construct body cannot hope to match the dark, luxuriant flavours of solid mahogany or rosewood.

But still it's warmer and more characterful than the uninitiated would expect; offering a lush, fluid sustain and useful helpings of resonance in the bottom end.

The presence of solid spruce, meanwhile, really lifts this guitar, bringing in a keen top end snap that sits very nicely in the mix. You'd certainly consider it for use in the studio.

Given the body size, the DCX1E is no shrinking violet au naturel, but it's also good to see Fishman's Classic 4T preamp system here. 'Ubiquitous' is a word, 'solid', 'dependable' and 'proven' are others - it's a strong performance all round, if a bit bulky compared with some more modern designs.

So if this environmentally friendly and cost saving option appeals to you, don't be shy. This is a great sounding and playing guitar that will reward those who come without prejudice.