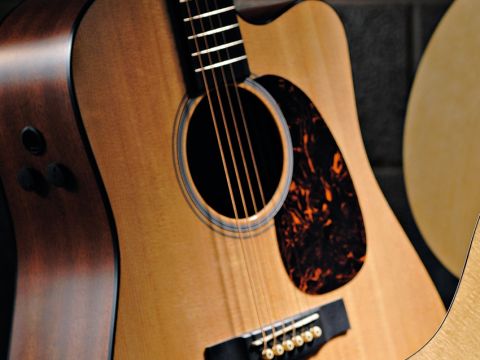 Founded over 175 years ago, CF Martin is arguably the most prestigious and recognised name in the world of acoustic guitars.

For the most part, however, its enviable reputation has been built on the success of its dry acoustics, that is, without any onboard electronics.

Recent years have seen the Nazareth-based, family-owned company turn its attention to the ever-growing electro-acoustic sector of the market. Industry figures indicate that electro-acoustics sales made up 37 per cent of the acoustic guitar market in 2010, up from 31 per cent in 2005.

In partnership with long-time supplier Fishman, Martin launched the all-new Performing Artist Series at NAMM 2010. The new range quickly became Martin's fastest-growing product line and has received rave reviews from all quarters - including us.

The combination of high- quality craftsmanship and the best in modern amplification proved a major success on the high street for the company.

Priced at £1,359, the DCPA4 is one of the most affordable Performing Artist Series guitars yet. It's an all-solid dreadnought with Venetian cutaways.

It comes loaded with Martin's new treated SP Lifespan strings and included in the price is a black TKL hard case. All good.

To assist in reducing costs in pursuit of a lower, more attainable price, Martin has utilised less expensive woods, while seeking to maintain the high performance characteristics of the earlier models.

In place of mahogany, the satin-finished back and sides is constructed from African sapele, a wood very similar in appearance and tone to mahogany and long used by Taylor.

Various synthetics are employed, too: a bone-substitute, white Corian, for the nut and saddle; an ebony-substitute, black Richlite, for the fingerboard and bridge material; and black Boltaron for the binding. Simple dot inlays serve as fretboard markers.

The onboard Fishman electronics system is a simplified version of that found on the PA3 guitars. The F1 Analog system is stripped back to the basic necessities of a gig.

The two push 'n' twist rotaries from earlier models remain, though it lacks the clever sound imaging, compression and automatic anti-feedback technology. All that remains is an onboard tuner (which mutes the output when engaged), tone and basic phase control.

Many found the full-fat Fishman system aboard the PA3 guitars a little too fiddly and fussy; the F1 is a clean-cut alternative.

One of the best features of the Performing Artist models is the all-new slim profile neck, which has been carried forward here. This design features a more parallel taper at the 12th fret, facilitating a more comfortable playing width in the higher registers.

Interestingly, the bridge spacing is also modified to 55.6mm (2 3/16-inch), thereby splitting the difference between Martin's two traditional spacings. Comparing this modification with our faithful D-18 and OMC-28, the difference is slight but noticeable.

As you'd expect for a guitar designed to be at home on the stage, the DCPA4 is fitted with two strap buttons; one in the standard position at the base of the guitar, the other on the treble side of the neck stack.

This position has become favoured by gigging acoustic players due to the way the guitar is pulled into the player's body.

The battery compartment and input jack are located adjacent to the base strap button. When hanging on a strap, access to the battery housing is compromised, but Martin claims the battery life of the F1 Analog is 200 hours.

Our only other niggle with the F1 is its display screen, which we found difficult to read when tuning the guitar in the standard seated position.

Added to this, when in tuning mode, the alpha string indicator switches between lower and upper case, which can cause confusion with both 'G' and 'b' looking like the number six.

Our particular review model boasts an excellent selection of Sitka spruce for its top, exhibiting layers of creamy quilting. Close inspection of the satin finished back and sides reveals a busy grain, which gives a very woody, earthy look and feel.

Body size aside, one of the only differences between the dreadnought model and its stablemates is the shape of the Delmar tortoise-shell pickguard. It features a standard shape that cups the multi-ring soundhole rosette.

Played seated or standing, we found the DCPA4 to be a stable, comfortable guitar and the speed-inducing, slim profile neck is perhaps the least taxing we've played. The factory set-up is also super-fast and will appeal to many electric players migrating from the 'other' side.

The overall build quality and level of workmanship is, as you'd expect, of the highest standard. Every edge is smooth, every joint is tight and the fretwork is faultless.

While employing lesser grade materials to bring the price point down, Martin has clearly not cut any corners in the quality control department.

The DCPA4 has a noticeably brighter tone than that we have come to expect from Martin. Underpinned by a strong bass, this Martin dreadnought carries a brighter, more pronounced mid-range, allowing for increased levels of punchy 'snap' and 'zap'.

In amplified mode, the strong mid-range comes to the fore even more and a spot of taming is required. Though simple in nature, the controls certainly do their job and offer a reasonable level of tone shaping.

While not being the most mellow, character-filled amplified tone, in recording/ stage scenarios the DCPA4 is a capable performer.

In terms of their playability, build quality and affordability, Martin has again produced a fantastic electro worthy of inclusion in the PA Series.

Since its launch, the Performing Artist Series has been accused of being too Taylor-like. We'd suggest that with the fourth generation of PA guitars, Martin has produced electros even more akin to their biggest rivals in both form and tone. Whether that's a good thing is ultimately up to you.