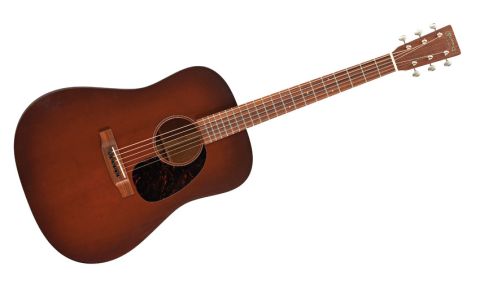 A great guitar that screams, "Play me!" Covers more bases than you expect, without batting an eyelid.

With the dark tones of the modest of Martins of yore back in fashion, we take a look at a new stunning strummer joining the 17 Series.

Acoustics with predominantly dark tops exude a quite different vibe from the standard 'natural' variety. This writer's first memory of them is via The Beatles and their Tobacco Sunburst Gibson J-160Es; they seemed so much more handsome than the plain folk guitars everyone else was playing. Going further back, images of the early blues masters - think of Robert Johnson with his brunette Gibson L-1 - have come to define that genre's aesthetic to this day.

It seems that the 'simple brown guitar' is enjoying a resurgence in popularity. In times past plain looks and spec were driven by economic austerity and while that theme chimes today, this new 17 Series Martin is anything but 'hard-times' choices, costing the best part of £1,500. Beneath the no-frills appearance, lies a guitar that epitomises the modern, quality acoustic instrument.

Martin's 17 Series has been around since 1856, enjoying various incarnations in its century- and-a-half history. The series has been discontinued and reintroduced, has come with both rosewood and mahogany bodies, spruce and mahogany tops plus varying levels of ornamentation.

Essentially, there's no definitive 17 style, so with this new model Martin could choose what it felt best suited today's tastes and market. The main talking point, of course, is that dark-shaded Sitka spruce soundboard; you might assume it was mahogany from a distance.

Beyond the top it's certainly not the most ostentatious of acoustics, either. There's no rear body or neck binding, for example, just a single soundhole ring and a line of brown tortoiseshell edging around the top. Even the pickguard blends in, so this guitar whispers its visual presence rather than screams it.

The shaded gloss top differentiates the 17 Series from other Martin ranges and it certainly makes it unique. A Martin insider describes the process for us:

"The burst pattern is created by a bespoke, state-of-the-art machine that accepts the full body assembly," he tells us. "Once the shading dries and cures, the body goes into our finishing process, is sprayed with nitro-cellulose lacquer and the top polished to a high gloss."

We bet they didn't envisage that back in 1856! We do still wonder, though: would this instrument not look even cooler were it finished in classic Tobacco Sunburst? The guitar comes with Martin's 'modified low oval neck' shape, and it will be interesting to see how this 14-fret dreadnought with 43mm nut/ 12-fret 000 with 44.5mm width impresses us with its sound and playability.

There's an argument that says if you don't notice the neck then it's a good one. That's definitely the case with the D-17M: you pick it up, whack your hand around an open G chord, and you're not quite sure if you're playing it or it's playing you. The no-drag matt lacquer comes into its own here, too; it's as though you're playing a 60-year-old guitar whose neck finish has worn completely away.

The action is low and inviting but without rattles. With 0.012s, string tension is stiff enough to avoid flap, but it's loose enough for lead lines. In fact, it's hard to fault on any front, proving once again that Martin's modern guitars are as playable as anyone else's.

Sonically, everyone knows dreadnoughts are strummers and 000s and OMs are pickers, right? Well, not necessarily. While it's true that dreadnoughts don't exhibit the more focussed projection and middle punch that makes these other body styles brilliant at what they do, their forté is fantastic all-round balance.

In a good one you can hear bass, middle and treble frequencies clearly, yet all the edges gel together: in many ways it's What Acoustic Guitars Sound Like! Of course, that makes them superb for bashing out big chords, but it also lends both poise and power to fingerstyle, perhaps more so with mahogany- bodied dreads than rosewood ones. The former is famous for its tonal balance, in fact.

There's warmth and clarity in equal measure, and a quickness of response that makes for a lively playing experience. With a Collings OM for comparison, the vastly more expensive rosewood guitar seems more articulate, with greater definition between the EQ bands - but it's really no more pleasing to the ear, and that's why these Martins score so highly with everyone that's played them. They are organic, earthy and loud.

With a decent mic slung in front of it, this D-17M will balance perfectly in a mix. It's big, bold and warm, albeit with some new-strings exuberance and new-guitar tightness that will calm and open up respectively in the weeks and months to come.

The 17 Series guitars came about due to dealers ordering otherwise all-mahogany 15 series Martins with spruce tops. So successful were the results that Martin ran with the ball and in the process created modern versions of a 157-year-old classic.

While simple in design, we can't fault the build, playability or tone of this guitar. The modified low oval neck plays supremely well and the dreadnought's standard nut width makes it feel like home to strummers. That said, it doesn't sit squarely in the ballpark we'd naturally allot it- picking on this dreadnought is a joy, too.

There's also something about the mahogany and spruce combination that appeals to us greatly. This guitar is warm-toned, and it's punchy and loud, with no need for breaking in - just perfect for someone wanting the moody look of a 15 but with a touch more sonic sophistication.