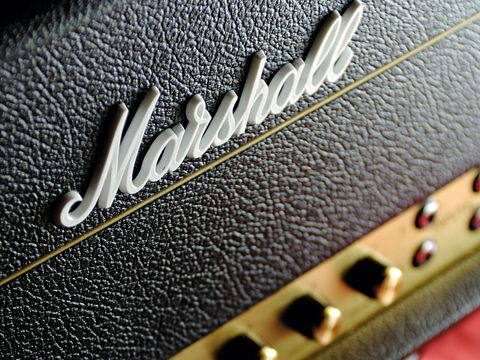 Seriously brilliant 'Plexi' tone, with every extra you could ask for thrown in. Don't hesistate - get your order in now!

There's no doubt that metal guitar players and shredders all over the world owe a massive debt to Yngwie J Malmsteen.

Coming to prominence in the early '80s on the crest of a new rise in the guitar's popularity, fuelled largely by Van Halen's debut album a few years earlier, Malmsteen's neo-classical style and jaw dropping virtuosity practically wrote the book for modern shred guitar.

One of the most technically advanced players in the world, Yngwie was the second artist after Eric Clapton to be honoured by Fender with his own signature Stratocaster, way back in 1988.

Throughout his career, Malmsteen has always relied on Marshall amplification, so it was almost inevitable that sooner or later the Swedish maestro would also get a signature amp to go with his guitar - finally it's arrived.

Heralded as 'The Ultimate Plexi', let's take a closer look at the behemoth of rock that is the Marshall YJM100 Signature Series Amplifier.

The first thing that strikes you about the YJM100 is its size. Although it's based on the Super Lead heads Yngwie has always used, the amp is cased up in a Marshall Major-sized box, which may be a sideways tip of the hat to Ritchie Blackmore, one of Yngwie's biggest influences and a long- time user of the Major during his Deep Purple days. It's deeper by about two inches compared with a standard 1959 head.

The black Levant pattern vinyl covering, gold stringing, lack of corners and small script logo all add to the YJM100's vintage appeal, as does the gold anodised control panel with period-correct toggle switches and adjacent small 'YJM' logo in place of the original JMP or JTM letters.

Behind the old-school styling, the electronics are far from vintage, with one large circuit board holding all the major components and smaller boards for the front and rear panel controls. Everything is neatly assembled and tied together, giving the overall impression that the YJM100 is as robust as any modern Marshall.

Both channels have separate volume controls, but share a traditional Marshall EQ consisting of bass, mid, treble and presence. Move round to the rear and you'll find the YJM100's modern side, with gain and level controls for a built-in boost stage, a noise gate, digital reverb and a series effects loop.

The YJM100 also features a half-power switch and the same electronic power attenuation circuit seen on the Slash Signature head, allowing the amp's output to be reduced down to as little as 0.05 watts in half-power mode.

The quartet of EL34 power valves is managed by a digital control system that automatically sets the bias current within a user-adjustable range; all you have to do is hold down a couple of buttons at power on. If a valve should fail, the same controller shuts down the affected pair and displays a warning LED on the rear panel.

The boost, noise gate, reverb and effects loop are all managed from a four-button foot controller that plugs in using a standard guitar lead - clever stuff.

Even without a manual the amp's extra features are easy to manage, and it only takes a few minutes to rein in the YJM100's awesome power.

The trick to getting the best sounds from this arrangement is to use a short patch lead to jumper both channels together using the extra input jacks. The separate channel volume controls then become the amp's primary tone controls, you just blend them to taste using bass, mid, treble and presence to fine-tune the result.

Of course, with the YJM100's electronic power attenuation you can max out both volume controls at comfortable listening levels to hear the output valves go into cut-off.

To add more gain, a tap on the footswitch brings the YJM100's built-in boost circuit and noise gate into play. This works just like plugging in an overdrive pedal between guitar and amp, with controls for gain and level. The noise gate comes on automatically at the same time, but can be switched off using the foot controller.

With only a little tweaking, the YJM100 delivers some of the best classic Marshall tones we've ever heard. It's less gained out than the AFD100, and so is darker with a lot more punch - just perfect for shredding along to Black Star, Rising Force or I Am A Viking.

Given Yng's strong affinity for early era Deep Purple, it's highly gratifying, but not surprising, to find that the YJM100 also perfectly captures Ritchie Blackmore's elusive tone from the seminal In Rock, Machine Head and Fireball albums.

With our Strat to detuned to E-flat, the YJM also does a pretty convincing job of nailing the classic Hendrix sound, duplicating the clean punch of Jimi's chopped wah rhythm playing just as easily as it does the long drawn-out wailing from Voodoo Chile.

The boost is simple to operate, with just two controls, as is the noise gate. The YJM100's digital reverb is an airy hall effect that stays smooth and warm as it tails off, adding a welcome dash of ambience.

Combined with the power reduction feature, the reverb makes the YJM100 ideal for recording and great fun to use at low volume. Conversely, turn it up through a good 4 x 12 and you can handle any venue, from small pubs to outdoor festivals - the YJM100 is loud and clear right up to the limit.

Like Marshall's other recent offering, the much-hyped AFD100 Slash Signature head, the YJM100 is a limited edition, this time pegged at just 1,500 units worldwide.

The amp also comes with a bright red custom cover and a variety of other goodies, so it will obviously appeal to collectors as well as Malmsteen fans.

There's always a danger with signature amplifiers that they end up with odd features making them unusable for the majority of players, but Marshall has steered clear of that here and produced a seriously powerful tool that will work for any player who wants to combine modern flexibility with classic Marshall tone and looks.

It's also a pretty unique combination of tone and features that you won't find from any competitor.

With all of this in mind, the YJM100's price tag is quite reasonable and we think represents very good value for money; sadly, because limited editions attract speculators, we dare say it won't be long before you see them selling for more.

Marshall has delivered once again: the YJM100 is a superlative recreation of the amp that wrote rock guitar history. If you want one, our advice is don't hesitate and order now - this is yet another Marshall destined for future classic status.