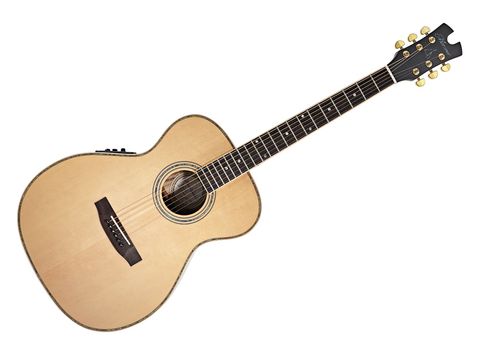 Though ticking green boxes, the OME may struggle to compete tonally with popular £500 electros.

For a number of years now, with MI industry elder statesman and acoustic aficionado Ken Achard at the helm, Mariner Guitars has pioneered the use of a wood called paulownia (pal-lone-e-ah).

Indigenous to China, paulownia is particularly well suited to guitar making. From a sustainable, geographical and manufacturing point of view, it ticks just about every green box there is.

"Its tight waist gives an aesthetic sweetness to the OME's lines and, coupled with the abalone and gold trimmings, results in a visually appealing package."

Mariner's Green Series of guitars is split into three sections. The Vertys guitars range from £385 for a 'dry' dreadnought through to £479 for a Super Jumbo loaded with the Fishman Presys system.

The Cutter range is Mariner's most affordable range, which currently consists of a parlour-style guitar priced at £325 - though word on the street is that new models could be arriving soon.

The Eunoia guitars top the Mariner price list at £525 for the Fishman Presys Blend system OM and dreadnought guitars, although the OM is also available as a straight acoustic at £429.

Additional decorative features include the liberal use of abalone. It's fitted to the binding of the guitars' back and front, as a centre strip between the two-piece back and where the sides meet, within the soundhole rosette, as inlaid fretboard markers and to the heads of the bridge pins.

Gold-plated tuners and hardware are also a welcome upgrade and, with on-stage duties in mind, it's good to see strap buttons fitted to the underside of the neck's heel. Mariner has in the past scored points for its green credentials; now it would appear they wish to widen the guitars' draw by appealing to the players' eye as well as to their conscience.

Eunoia electros are fitted with Fishman Presys Blend electronics - an upgrade over the Vertys electros, which use the Presys + system. As its name would suggest, the Presys Blend incorporates both a pre-wired Sonicore undersaddle pickup (as fitted to Martin's X Series electros and many others) and an internal microphone - both individual signals can be blended.

The tight waist on the OM model (a whole 1.5cm narrower than Martin's OM28) results in the control panel being installed on the lower bout - which is a tad awkward for speedy mid-song adjustments because the panel is just a little too far back.

The Fishman preamp comprises low-profile rotaries and an LED tuner, which can be engaged whether or not the instrument is plugged into a cable. The nine-volt battery is housed underneath the control panel, which pivots to facilitate access.

Quite clever in theory but, as soon as you let go of the housing, it slams shut! This can be frustrating and battery changing is not recommended mid-gig.

Though positioned at the lower end of Fishman's range, the Presys Blend system still has a lot to offer. In addition to the centre-indented rotaries for the bass, mid and treble, the features include a notch filter to control unwanted feedback, and a phase push-button.

To this reviewer's eye, the OME is one pretty guitar. Its tight waist gives an aesthetic sweetness to the OME's lines and, coupled with the abalone and gold trimmings, results in a visually appealing package.

In terms of body dimensions, with the exception of the waist, the OME is a mirror of Martin's OM28 - as is the shape of the bridge. The string spacing is noticeably tighter than that of a Martin, which will appeal to some as the neck also has a slimmer profile to that of a 'chunky' Martin.

Seated or standing, the OME is balanced and comfortable to play. The action is good and the fretwork is excellent.

Unfortunately we did find QC issues in the body of the guitar. Excess glue; kerfed linings that could have been cut more accurately - nothing major or frightening, just a bit sloppy.

The OME's reduced 'box results in a scaled-down tonal package when compared with its sibling the DEC. Though offering a little more sweetness overall, the OME's timbre is predominately very dry and woody. At times, particularly when pushed, it sounds a little too boxy.

Played against a Tanglewood TW45 electro (a less expensive instrument), the Mariner fares well in terms of volume and sustain. But, we feel, it lacks a little character and depth, something that will quite possibly improve after regular playing and the passage of time.

Plugged in, however, the Fishman electronics perform well and provide a range of credible amplified tones.

Curiously, we found the sweetest tones came from completely scooping out the microphone and relying on the Sonicore UST. Feedback wasn't too much of an issue and the bright output could work well in recording scenarios.

Mariner is to be applauded for its pioneering work with credible, alternative woods for guitar making. The OME may appear comparatively expensive, particularly when judged solely on sound, but there's a bigger picture here: one that we're all likely going to have to look at a lot more closely in the years ahead.