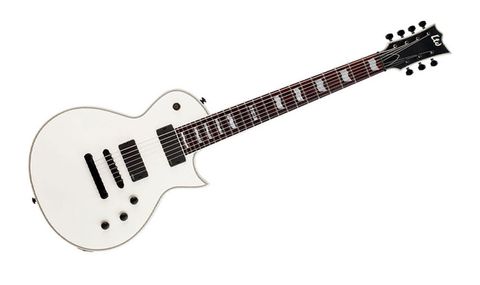 This is an instrument built for intimidation. Oh yeah, it looks suave, but it's a brawler - and yes, it's also available in black.

This update to ESP/ LTD's classic hot-rodded single-cutaway is a contrary beast. On one hand, we have the classic Eclipse silhouette, mining the Les Paul for inspiration and finished off with a rather neutral white paint job and satin-smooth finish. On the other, we have a guitar that's all but been weaponised in an effort to create a rock/metal guitar that can fathom the hitherto fathomless depths of heavy tone.

As a six-string,this Eclipse - with its maple-topped mahogany body, active EMGs in neck and bridge, fat-fretted and slimmish U-profile neck - would be a great all-rounder for anyone playing rock and metal.

As a seven-string, it feels very much like a guitar for the specialists, for those looking for some genuine heft to their seven- string tone. And there is some seriously sinewy tone beef to chew in the EC-407's lower registers.

The market for extended-range guitars is growing ever-more competitive. Hot-rodded double-cut bodies with Floyd Rose locking vibratos, V-shapes, X-shapes - all your gear predilections are catered for.

What defines this axe in such a crowded market is that it boasts such a molasses-thick metal tone in a guitar imbued with a touch of refinement. It feels heavy. It sounds heavy. If it were a deep thinker, "heavy" would be the answer to all of its deepest existential questions, while contemporary metal would give its very existence some purpose. It's built in Indonesia, so you can pick one up for less than £700 online, and you'd have a studio-ready guitar with some pro-quality specs and tone.

It takes some getting used to, though. When first getting acquainted with the EC-407, the neck, though admittedly slim, feels a little disorientating, like your Les Paul has mutated, its fretboard grown super-sized. But the satin finish offers gum-free playing for sweaty hands, and extra-jumbo frets compensate shredders who might worry about the amount of ground their fingers have to cover.

Seven-strings will never be the most playable guitars in the world but, crucially,theEC-407 is as accessible as they come, and tonally it delivers. Big time. Okay, so maybe the clean tones are a touch uninspiring, but its overdriven and distorted tone is what you buy this guitar for.

Low-end rhythm playing is a world of hi-def chug. With the gain maxed out and the bridge-position EMG 81-7 selected, the lead voice is harmonically rich and searing, yet pleasingly substantial and never shrill. Note definition for open chords is excellent.

As you'd expect (and demand), the neck 'bucker has a little less attitude, tighter for sweep picking an arpeggio or four, and somehow less intimidating. Yet this is an instrument built for intimidation. Oh yeah, it looks suave, like an ancestor of the electric guitar's gentry, but it's a brawler - and yes, it's also available in black.