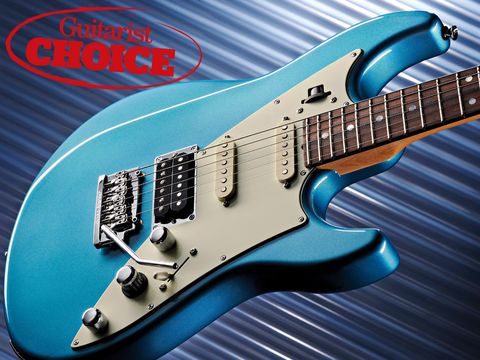 The 2010 Variax updates the previous version with better sounds, functionality and a much, much better chassis: a must-try for any player who requires lots of different sounds or tunings, fast.

There's little doubt that Line 6's Variax was one of the most talked about guitar introductions of the past decade - the world's first digital modelling guitar. But a major criticism of Variax wasn't the technology, but the guitars themselves.

While they were perfectly functional, they looked odd without magnetic pickups and felt rather ordinary - a stark contrast to the onboard technology. Over the past three years, however, a new 'Mark II' iteration of the Variax was being slowly planned.

This time the guitar side of things has been designed by noted LA boutique luthier James Tyler, leaving Line 6 to improve and update the technology. This is reflected in the guitar's name, James Tyler headstock logo and a more prominent gold-edged, black Variax logo - the only Line 6 logo appears on the battery compartment's cover.

The result is seven guitars: four USA-made models (of which we have a pre-production JTV- 69US on review) and three Korean-made models.

Tyler's guitars are some of the most sought after in the world, but these USA-made guitars aren't made by James. "The necks and bodies are made by Wildwood Manufacturing in northern California," he explains. "They get painted by Fausto at Reyes Painting in southern California, then assembled, set-up and QC'd by Tim Wilson, who ran the Jackson shop for 17 years."

Stylish and close to a Strat in overall length and width we get an off-set Jazzmaster-ish curve on the lower bout with a more angular forearm contour on the face - it's no belly cut, just some generous rear edge radiusing. The heel area is nicely shaped and chamfered, the neck firmly held with four recessed screws.

"The neck back shape is my standard '59' shape," confirms Tyler. It's a very 'old Fender' big 'C' shape with a hint of 'V' in the shouldering, which always makes a neck feel thinner than it is.

"Players seem to really like that neck. Since the feel of the neck is one of the most important things about a guitar, I figured that it was a no-brainer to put a proven neck shape on these guitars."

The two-post floating vibrato is custom-designed by Tyler too - it has a steel top plate and 'L'-shaped saddles that hold the newly designed LR Baggs piezo elements, which take the string's signals into the digital realm.

The strings top load into individual keyhole slots - they don't pass through the zinc inertia block in usual Strat-style. Hipshot provides the lightweight, staggered-post Grip-Lock locking tuners. Unlike the Mark I version we get a trio of magnetic pickups controlled by the knurled volume knob and tone controls that will, on the final production samples, be Korean-made to Tyler's specs.

A five-way lever switches them in standard Strat fashion (positions two and four are hum-cancelling; and in position two, bridge and middle, the humbucker is split to voice the forward slug coil only).

On the back we have a flip-top compartment for the lithium-ion rechargeable battery (which offers 12 hours of playing time). A small push button on the edge of the flush casing allows you to gauge the battery power status via a row of small green LEDs.

A larger cover-plate hides the PCB and nest of wires passing to the outputs (a standard jack and a covered Variax Digital Interface output - you can only run both magnetic and digital simultaneously hooked up to a POD X3 processor).

The Model Selector is sited, like the singlecoils, volume, tone and Alternate Tuning knob, on the tri-laminate scratchplate. When pushed in, the Model Selector is back-lit (indicating the digital mode) and allows you to select from the 12 banks of sounds, each with five sounds in each, voiced by the five-way pickup selector. When you push the Model Selector again, or initially plug in, only the trio of magnetic pickups work, along with the five-way, volume and tone controls.

Previously, any altered tunings had to be created via Line 6's Workbench software (now included with every new Variax). The Alternate Tuning control, again back-lit, scrolls through 12 modes - 10 alternate tunings plus Standard and Model (for a full run-down of the guitar's models and tunings visit the Tyler Variax site).

The tunings can be user-overwritten via the 'virtual capo' feature but, "every model can have its own alternate tuning programmed outboard via Workbench," says Line 6. "Set to Model, the Alternate Tuning knob lets you access these alternate tunings; set to Standard, the knob overrides it to set every model to standard tuning."

Internally, the Variax features a new dual-core processor that provides "richer and more authentic-sounding models." Line 6 has worked with LR Baggs to improve the piezo elements within the bridge, not least the piezo 'clang' that was noticeable, especially at high volume levels.

Alongside the USA-made Variax guitars are three models made in Korea by World Musical Instruments (the company that makes guitars for numerous brands including PRS's SE line).

"They're exactly the same," confirms Rich Renken. "You're not making any compromises on the sound when choosing this as your weapon."

"We've worked very hard with World Musical Instruments to achieve a high level of build quality on these guitars," adds James Tyler. "Recently, someone handed me a [Korean] candy apple red JTV-69 to evaluate and I thought it was the American model at first!"

The new version is easier to use than ever: check your battery, plug in and play. Even without charge the magnetic pickups will still work: a low output vintage humbucker married with two modern, clean singlecoils. Excellent.

Press down the Model Selector and you enter the virtual world - 10 banks and 50 sounds (plus two additional custom banks) from some 25 classic guitars. The first thing you notice is some slight background hiss, not intrusive but it's there. Constantly referencing the digital against the magnetic sounds, you do perceive differences.

Overall the dynamics are a little more limited and bass response can sometimes seem a little clouded; conversely the high treble response can sound a little over-crisp on brighter sounds.

But the quality of the models is excellent, they'll always sound a little different from the real thing, but they more than capture an accurate character and there are some excellent sounds onboard.

The really difficult areas are the altered tunings and 12-strings, which use sophisticated pitch-shifting. The electric 12s sound less processed to this writer's ears than on Mark I Variax (and, of course, are much easier to play and tune than the real thing) but you do hear some slight pitch chasing and again your playing technique needs to be firm and spot-on.

The Variax doesn't physically retune your strings - they stay in standard pitch, but when you apply an altered tuning, via pitch shifting, the outputted sounds are in the new tuning.

If, for example, you just want to add a Stones tune to your live set (or a Stones-y intro then return to standard tuning), Blues G works great. Dropped D with loads of gain is going to satisfy the modern rockers and a couple of DADGAD tunes in a Zep-style are easily possible.

The baritone setting really stretches the technology, and does sound the most synthetic, but if you just want to add some overdubs to your Americana tune, you'd probably get away with it. You can apply these tunings to any of the models, including the 12-strings.

A modern H/S/S solidbody with floating vibrato and electric strings is about as far as you can get from an old flat-top, so it's little surprise to hear a lot of zing on the acoustic tones. Adding an LR Baggs Venue DI and tweaking the sounds creates far more realism.

Our Fishman acoustic amp and the Baggs DI also works well with jazzier electric sounds: bluesy Kenny Burrell-type tones with the ES-175 models and a really evocative Epiphone Casino neck pickup model. Be in no doubt, there are an immense amount of usable sounds here.

Overall, our impression is more than positive. The modelled sounds just seem better, likewise the acoustics, 12-strings and altered tunings. It's a great guitar to play, stays in tune perfectly and is easy to use.

Dislikes? The back-lighting on the Model Selector and Alt Tuning knobs is fine in darker environments, less so on a bright or outdoor stage - you may have to shield the knobs to double check whether you're in digital or magnetic modes. But this is a small price to pay for such a fantastic instrument.

Variax has definitely grown up. This JTV-69US platform is a very credible guitar in its own right, a lot better than the previous guitars and, save for the additional Alt Tuning and Model Selector knobs, looks very conventional.

The new battery system is a godsend and internal improvements have clearly raised the quality of models and the switching functions, which are very fast.

In its USA-made incarnation it will have limited appeal unless you really understand its potential and could justify it as part of your earnings. The Korean version is where most interest will be and, although we have to reserve judgement until we've played those, if you're someone who appreciates and needs a variety of sounds for your recordings or live performances, we'd suggest you start saving…