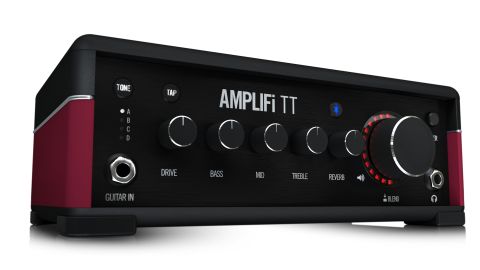 A feature-packed practice and recording tool that's compact enough to fit neatly into the home environment.

The AMPLIFi is designed to aid you when you're practising guitar by not only providing a wide range of modelled amp and effects sounds, but streaming music to play along with over Bluetooth.

The TT has the look of a mini amp head with front panel knobs for drive, bass, mid, treble and reverb. You can use it with headphones, or use the rear jack outputs to connect it to your stereo system or powered monitors.

Alternatively, an amp output sends out the processed guitar sound optimised for a guitar amp, operating in conjunction with streamed audio sent through the stereo outputs.

Furthermore, there's an optical output to connect to a home theatre setup and the TT also functions as a two in/two out USB audio interface for computer recording.

By itself, the TT gives you front panel access to four presets in its internal memory. To use it to its full potential, though, you need to the free AMPLIFi Remote app for iOS and Android (certain devices, version 3.2 or later).

This gives access to many more presets (100 onboard and an unlimited number in the cloud) each with up to eight simultaneous effects.

There are plenty of good presets that encourage you to play, but creating your own is dead easy from an iPad touchscreen, making use of the available 70-plus amps, 100-plus effects and 20-plus speaker cabinets, all with plenty of tweakability.

You can stream any song from your music library and blend your guitar with the music using a front panel mix knob.

Half-speed playback is available and dialling in a guitar tone to match any song is made easy by a tone-matching facility that utilises a wifi connection to automatically find a relevant tone.

You can also search for tones by song title, guitarist or band - there's a growing amount on the cloud and you can submit your own programmed tones for others to download and use.

Of the three AMPLIFi form factors, this is the most affordable and perhaps the most practical, in that it can be moved around easily and is compact enough to sit discreetly on a shelf or tabletop, allowing practice in any room where you can plug in its power adaptor.

With comprehensive connectivity, music playback and a range of sounds to suit many music types, the TT is one very useful gadget to have around the house.