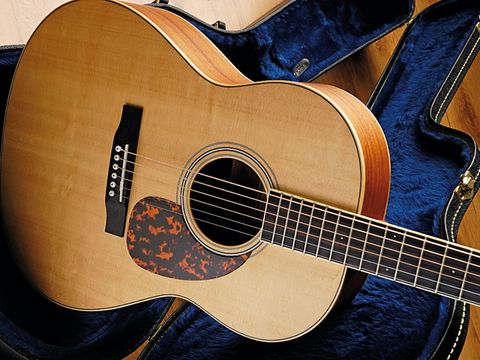 How can you look a gift horse in the mouth? Time to flash the cash, we say.

The last time 02 Series Larrivées appeared in the UK was back in 1999, as a riposte from the Canadian brand to the battle between the North American makers, and those globally too, to produce ever cheaper yet still pro-grade all-solid wood acoustics.

The company had already ducked the magic £1,000 barrier two years earlier with the then £949 D-03 dreadnought, and the 02s shaved nearly another £200 off that asking price.

In 2000, Larrivée trumped those with a short-lived run of even more affordable, no-frills 01s.

Fast-forward to today, and competitive pressures are just as great, not least because the recession has hit sales of upper-mid priced acoustics, and makers such as Larrivée need competitive entry-level models in their caåtalogue, just like Martin with its Road and 1 Series, and Taylor with its 100s and 200s (though note that these particular Taylors employ laminated backs and sides).

The bald fact is that, due partly to the strength of the Canadian dollar and not helped by the UK VAT hike, Larrivée hasn't been able to offer any sub-£1,000 models at list price in the UK for the last year or more. Welcome back, therefore, the 02 Series.

Well, for the time being anyway. Relaunched as three models - D-02, OM-02 and our 'Larrivée Body' L-02 - they're limited editions.

There's not a predetermined quantity, but they will be available only during the remainder of 2011 - the numbers shipped dependent on demand. A decision whether or not to make the 02s an ongoing line will be taken early next year.

Retailing, like the other new 02s, at £799 including case, the L-02 comes in over £200 cheaper than the equivalent L-03, yet the specification differences between these two satin-finish, all-solid Sitka spruce/sapele instruments are minor.

The 02's neck is three-piece mahogany rather than a one-piece affair, the peghead overlay is rosewood not ebony and, well, that's pretty much it.

However, it is worth noting that body binding is upgraded from the earlier incarnations' black fibre to dark-wood-purfled maple - the same as the 03 - and the fingerboard and bridge continue to be ebony.

It seems the main cost savings have been achieved by using woods that might be cosmetically less attractive though not necessarily of a lower grade.

Gazing upon our sample reveals the odd discoloration and occasional wavy graining on the top, and a couple of tiny knots on the not-quite-perfectly bookmatched back, but these 'imperfections' are, frankly, hardly likely to be a deal breaker - especially when weighed against Larrivée's typically exacting standard of presentation and detailing on the instrument as a whole.

Dating back to 1971 as Jean Larrivée's first regular-production steel-string flat-top, the 16-inch-wide, generously-rimmed 'L' design is an interesting and distinctive one.

On the one hand it bears a passing resemblance both in size and profile to a slope-shoulder dreadnought (or Advanced Jumbo to use Gibson nomenclature).

On the other it has clearly influenced other manufacturers' later non-cutaway grand auditorium designs, not least Taylor whose much more recent, if slightly larger, GS grand symphonies also attract comparison.

Into this potpourri could be added a hint of small jumbo and a soupçon of upsized classical styling, the latter not surprising given Jean's nylon-strung apprenticeship in his early days. The L-02 may, to an extent, have a stripped-back spec, but it's by no means a dull-looking guitar.

Aside from the maple body binding, which extends to an inlaid fillet across the baseblock, the tortie scratchplate and concentrically ringed rosette help lift the aesthetic, as do the fingerboard's discreet pearl micro-dot markers and ivoroid binding, the latter also used for the heel cap.

The satin finish is baby-smooth to the touch, on both body and neck. There's no second strap button at the heel, which is a slight shame, but retrofitting one would be an easy enough job.

Whereas the D-02's neck has a regular 43mm nut span, the L-02's (in common with the OM-02) offers a wider, fingerstyle-friendly arrangement, kicking off at 44.5mm, broadening a fair bit further up, and terminating with a bridge string spacing of a versatile, all-purpose 55mm.

Span-wise it's not exactly a snug handful for the smaller handed among us, but the grip is kept comfortably manageable thanks to a shallow 'C-cum-D' profile.

The only minor criticism is that the fretting, while very well fitted and polished, has quite abruptly chamfered ends that merit more rounding off for ultimate slickness.

As an acoustic of dreadnought/small-jumbo proportions, the L-02 definitely does not disappoint. Volume and projection are sturdy, cross-string definition is clear and balanced, and though the attack sounds slightly taut the follow-through dynamics are supple and responsive, as is the sustain.

Initial tonal impressions are of a fairly brightly voiced instrument, but that would be to overlook the generous warmth that emerges from the low end, pleasingly infusing the whole sound.

It does this more noticeably the nearer you strum or pick towards the neck. In other words it's a guitar capable of expressive and varied subtleties, not just a one-sound box.

Larrivée is facing quite the dilemma. Based on the L-02's intrinsic high quality and strong showing here - and there's no reason to doubt that the dreadnought and OM variants will be any less proficient, there is a real risk that the L-02s would compromise the appeal of the broadly similar but pricier L-03s were they to become permanent fixtures in the catalogue.

On the other hand, this L-02 is simply too good to pass up for the money, and perhaps survival of the fitter (and cheaper) ought to prevail...